His enlightenment led him to Roseburg, Ore., and the creation of Abacela Winery, where Jones — owner and founding winemaker — planted the region’s first Tempranillo vines in 1995.

“I was on the Gulf Coast of Alabama, and it had gotten written up in one of those glossy wine publications,” Jones said wryly. “I bought a bottle from a shop in Bethseda, Md., had it sent to me by mail and I was really impressed. I’d had Tempranillo before many times, but that was the one that began to push me into an early retirement from medicine and into a new career in winemaking.”

Jones, one of the country’s top research dermatologists, used his scientific background to quickly achieve critical acclaim as a winemaker. His second commercial vintage of Tempranillo — the 1998 Estate — won a double gold medal and topped all 19 entries from Spain at the 2000 San Francisco International Wine Competition, which put Abacela on the map.

Along the way, Jones has been marketing more than just his own Tempranillo. In 2002, he began laying the foundation for the Tempranillo Advocates, Producers and Amigos Society (TAPAS). He served as its first President in 2006 and remains on the board of directors.

One marketing tool TAPAS enjoys pointing out is that Tempranillo ranks No. 4 in the world in terms of plantings, accounting for 500,000 acres. The reason it struggled for distinction stems from the litany of synonyms. Jancis Robinson’s Vines, Grapes & Wines lists more than a dozen, but TAPAS claims there are more than 60 for Tempranillo just in Spain.

“When the board of directors at TAPAS were playing with various ideas, we were in touch with some Spanish groups that were not particularly excited about an International Tempranillo Day,” Jones said. “Then three years ago, a Spanish wine writer wrote this great article in Madrid saying that it brought so much attention to the Rioja, the Ribera del Duero and La Mancha and that it clarified the grape used to make great Spanish wines was Tempranillo.

“Now, they are not all buying into the system,” Jones added, “but the international day has caused the Spanish to re-think the name ‘Tempranillo.’ ”

Few winemakers in the Northwest can tell the history of a variety as scientifically as Jones, who eloquently shares his passion for Tempranillo with consumers and trade.

“I tell them it’s a red wine that’s going to be fruity and will be somewhere in the spectrum between Cabernet Sauvignon and Pinot Noir,” Jones said. “How can you have all that in one glass? That’s what Tempranillo is. It’s naturally more tannic than Cabernet, and part of the winemaking that’s critically important is to control those tannins.”

Tempranillo accounts for 380 acres in Oregon

The sales pitch works. Last year, there were 380 acres of the bold grape producing in Oregon, and his Fault Line Vineyards account for 27 of those acres. But the lineage for many sites can be traced back to Lookingglass Road.

“Practically everyone in Southern Oregon that has Tempranillo got their cuttings from me, starting as early as 1998,” Jones said. 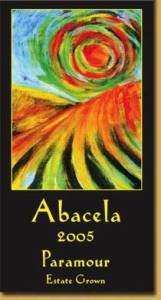 Abacela plant material rapidly migrated into the Walla Walla Valley, where Christophe Baron of the cult Cayuse Vineyards in Milton-Freewater, Ore., stuck cuttings into his En Chamberlin Vineyard in 2000. There’s a funny story about Baron’s early commentary on the power of that fruit, yet the French winemaker now boasts of the 100-point praise his 2008 Impulsivo Tempranillo received from one critic. Several other publications aren’t far behind, either.

The grape has proven profitable for the rest of Oregon, too. The 2012 Oregon Wine Report, published this week by Southern Oregon University’s Greg Jones — Earl’s son — measured the state’s value of Tempranillo production last year at $1.26 million. That was a 59 percent increase from 2011.

“It fits the climate, and that’s why wineries are embracing it,” Earl said. “They see that it ripens almost exactly within the growing seasons of the Northwest and produces a very nice wine. It’s now a passion in Idaho, and the Snake River Valley is positioned in a very great growing region for Tempranillo — except for the winter kill risk, which you also find in the Yakima Valley and in the Walla Walla Valley, too. The winter kill issue is what made me come to Southern Oregon instead of growing it there.”

One reason for Idaho’s pursuit of Tempranillo is the grape’s natural desire to achieve ripeness before other varieties. At Abacela, he typically begins picking Tempranillo blocks on Sept. 24. By the second week of October. his crew has rounded up the remaining blocks and nine clones of Tempranillo.

“That’s how it got it’s name — temprano in Spanish means ‘the early one.’ They were comparing it to Garnacha, which is quite late,” Jones said.

The 2013 vintage brought Abacela a historic amount of summer heat, which created some issues. Then came mid-harvest rains, which made picking troublesome, but the Tempranillo actually benefited, Jones said.

“It was a great vintage, but it came in three different harvests,” he said. “We harvested about a third of it — starting Sept. 13-14 — before the rains, but at that time, our problem was that the alcohol level was exceeding the flavors. After the rain, the sugar levels came down and we got the flavors we wanted. Everything was out of the vineyard by the 14th of October.”

9 clones of Tempranillo planted at Abacela

Jones, 73, continues to work with University of California-Davis researchers on bringing new clones of Tempranillo from the Iberian Peninsula. (It’s a five-year trial before a clone can be certified). His top performers are Clone 1, the Toro clone and Duero clone 12, and any bin of those three can bring a grower as much as $2,500 a ton — about $500 more than fruit from other clones.

The lone clone he’s given up on is Tinta Roriz.

“We only had a single acre of it, and we were using it for our Port in the early days,” Jones said. “We pulled it out in about 2005 and replaced it Garnacha.”

Understandably, he’s tempted to expand upon the 76 acres of vineyards he and his wife, Hilda, own near the safari park in Winston.

Besides, he seems content with the Tempranillo already in bottle.

Abacela will extend its celebration of the third annual International Tempranillo Day into the weekend. Today’s featured event at Jones’ Vine and Wine Center will be barrel tasting of the just-pressed 2013 Tempranillo. On Friday, paella will be paired with Tempranillo. Saturday features a brown-bag showdown of four Tempranillos from Abacela vs. four from Spain.

Visitors also will be able to purchase the final few cases of Abacela’s 2005 Paramour, the first Gran Reserva-style Tempranillo made in the U.S. The second vintage of Paramour, made by Andrew Wenzl in 2009, will spend at least two more years in bottle before its release.

But this weekend, Jones’ mind will take him back to the Ribera del Duero — home to Bodegas Alejandro Fernandez’s Tinto Pesquera, a wine that in 1985 famed critic Robert Parker dubbed “the Petrus of Spain.” It was made possible by Tempranillo, which the bodega refers to as “The Queen of Grapes.”

“He’s my hero,” Jones said of Fernandez. “I tried to meet him several times before, but I’d always be in the wrong place at the wrong time. I finally got a chance to meet him at his winery in the Rioja in the late ’90s. He’s a great man, a very impressive fellow.”