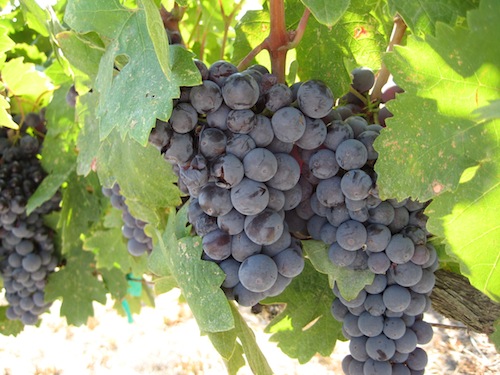 Zinfandel and Primitivo are considered clones of the same grape – a grape that may have originated in Croatia. (Photo via Flickr.com/click for credit)

Evidence would indicate that Croatia could be the cradle of wine grapes, with cultivation of vitis vinifera dating back some 8,000 years. Perhaps Croatia’s greatest contribution to wines we enjoy today is Zinfandel.

Or is it Primitivo? There is some question about the difference between the two red grapes.

In fact, experts now believe Zinfandel and Primitivo are clones of an obscure Croatian grape called Crljenak Kastelanski. In the vineyard, Zin and Primitivo are not identical, and our federal government recognizes them as separate varieties.

On wine shop shelves, consumers now will find Washington wines made from both Zinfandel and Primitivo, though in small amounts because few acres of either variety have been planted through the years. (Zinfandel, by the way, should not be confused with white Zinfandel, a sweet, simple blush wine we lovingly refer to as “California Kool-Aid.” Rather, it is a robust red famous in Northern California’s Dry Creek Valley.)

Here are some examples of both Zinfandel and Primitivo from Washington wineries.

Maryhill Winery 2010 Northridge Vineyard Primitivo, Wahluke Slope, $32: This Goldendale winery is famous for its Zinfandel, and it crafts Primitivo equally well. This opens with aromas of cigar leaf, dried strawberry, raspberry and something that reminds us of an Arab spice market. On the palate, it reveals flavors of black pepper, dark chocolate, strawberry-rhubarb jam and Bing cherry.

Martin-Scott Winery 2010 Zinfandel, Columbia Valley, $20: This East Wenatchee winery is run by Mike Scott, who produces delicious and affordable reds. This opens with luscious aromas of a Hostess berry pie, Nutella and black pepper, followed by flavors of boysenberry, dark chocolate and raspberry. This is a smooth, pretty wine.

Wind Rose Cellars 2011 Primitivo, Wahluke Slope, $25: Owner/winemaker David Volmut focuses on Italian varieties at his Sequim winery, and this offers aromas of strawberry, black pepper and cherry, followed by flavors of chocolate and raspberry. A core of ripe red fruit leads to a rich midpalate and good length.

Yakima Valley Vintners 2010 Primitivo, Horse Heaven Hills, $18: Let’s hear it for the next generation of Washington winemakers. This gorgeous Primitivo was produced at Yakima Valley Community College with grapes donated by Washington growers. It begins with aromas of spice, cherry syrup and oak, followed by flavors of rich dark chocolate, cherry and raspberry.

Siren Song Wines 2010 Zinfandel, Washington, $32: Owner/winemaker Kevin Brown runs this small winery in West Seattle. The California native used grapes from Milbrandt Vineyards on the Wahluke Slope for this Zin. This opens with aromas of fudge, raspberry and mocha, followed by rich flavors of chocolate, oak, cherry and raspberry. It’s a bold wine with a long finish.

Two Vintners 2010 Zinfandel, Wahluke Slope, $25: Morgan Lee, winemaker for this Woodinville, Wash., winery, has crafted a Zin that has a bit of Primitivo and Petite Sirah blended for complexity. It shows off aromas of raspberry-chocolate sauce and black pepper, followed by flavors of raspberry jam. It’s a big, rich wine loaded with flavor.