Washington winemaker to circle globe for next 2 years 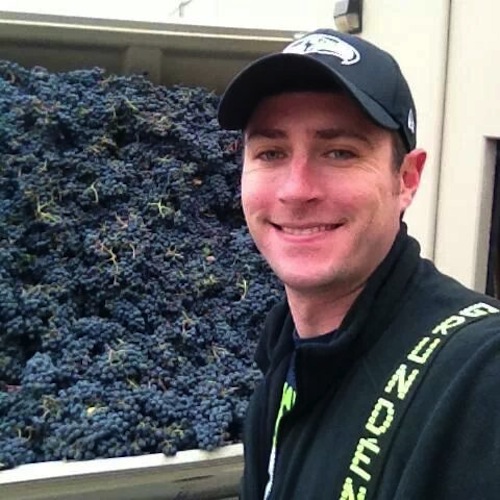 Marcus Rafanelli, head winemaker at William Church Winery in Woodinville, Wash., will spend the next two years circling the globe and working harvest in different regions of the world. (Photo courtesy of Marcus Rafanelli)

WOODINVILLE, Wash. – One of Washington’s best and brightest is going on a magical winemaking tour, with plans to crisscross the globe for the next two years.

Marcus Rafanelli, who just completed his sixth harvest as head winemaker for William Church Winery in Woodinville, is heading Down Under right after the Super Bowl to work at one of Australia’s top wineries.

Rafanelli, 35, originally planned to take a four-month sabbatical from William Church to go to Australia and experience harvest in a different region, then bring that new knowledge back home. But during the holidays, he decided to make a bigger life change, so he sold his house, paid off his student loans, cleared off all his debts and decided to become a globetrotting winemaker for at least the next two years.

It’s his version of the Endless Summer – and endless harvest of sorts that will return him to Washington a much different winemaker – and person.

“This is the kind of experience I think I need to progress as a winemaker in Washington,” Rafanelli told Great Northwest Wine. “William Church has been such a great experience. Now I’m glad I can go and see how it’s done elsewhere.”

From ski bum to winemaker

Rafanelli, a Seattle native, learned about wine in Idaho. After graduating from Boise State University with a degree in biology, he moved to Sun Valley and became a ski bum. While working at restaurants, he discovered wine.

“I decided I’d like to be on the other side,” he said.

So he moved back to Washington in 2005 and enrolled in Walla Walla Community College’s acclaimed viticulture and enology program. While going to school, Rafanelli worked as a harvest intern at L’Ecole No. 41 in Lowden and was assistant winemaker at Cougar Crest Winery west of Walla Walla.

Upon graduation in 2008, William Church owners Rod and Leslie Balsley hired him for their 3-year-old Woodinville winery. His talent was immediately apparent, especially with white wines such as Viognier. In the ensuing few years, his skills with red wines expanded to the point where they can be counted among the best in Washington.

“As I’ve gained experience, it’s been easier to build those blends,” Rafanelli said. “I’ve learned more about the red winemaking process over the years. It takes time.”

Last year for his 35th birthday, Rafanelli treated himself to dinner at the acclaimed Herbfarm restaurant in Woodinville and ordered a bottle of the Columbia Winery 1988 Syrah – the first Syrah made in Washington. The legendary team of winemaker David Lake of Columbia and grape grower Mike Sauer of Red Willow Vineyard worked together to bring Syrah to the state in the mid-1980s. Now, Red Willow sells grapes to William Church. While tasting the legendary wine, Rafanelli had an epiphany.

“I was seeing the same character in that wine as I see in mine,” he said. “It finally clicked.” 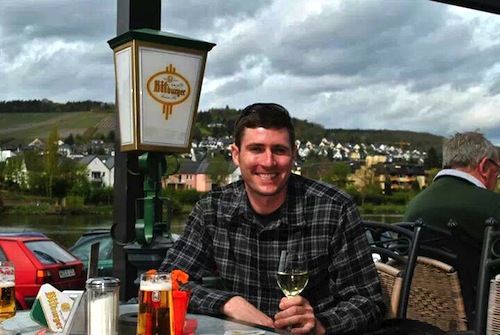 Marcus Rafanelli enjoys a glass of German Riesling on a trip to the Mosel Valley. This fall, he will work at Dr. Loosen, one of Germany’s top wineries. (Photo courtesy of Marcus Rafanelli)

Now Rafanelli will take what he has learned and circle the globe for two years. The first stop is Two Hands, a 45,000-case winery in South Australia’s Barossa Valley that has had a wine in Wine Spectator’s top-100 list for 10 straight years.

But before he gets on that plane, the lifelong Seattle Seahawks fan will head to New York with his father in the hopes of tracking down a couple of tickets to the Super Bowl on Feb. 2. They’ve seen every game played in Seattle this season, and they’d like to enjoy one more.

Once he is in Australia, he will have the opportunity to work – a lot – with one of his favorite grapes: Syrah/Shiraz.

“It’s going to be cool working in Australia with Shiraz,” he said. “With their hot weather, I’m excited to see how they handle a really ripe Syrah. Washington’s climate could be like that in the future, so it’s a good experience to go to one of the hottest regions in the world for Syrah.”

Rafanelli will work in Australia for four months then head to Southeast Asia to travel in such areas as Thailand, Vietnam, Indonesia and Laos, where he looks forward to swimming, snorkeling and surfing – generally spending as much time as he can on, in and near the water.

By mid-July, he’ll fly back to Seattle, where he will be a Seafair clown, performing in parades and at hospitals and senior living facilities. It’s something his father has done for 46 years and Rafanelli has been doing for five.

“It’s a family tradition that I’m carrying on with my dad,” he said. “It’s one way we get to hang out during the summer.”

After enjoying August in and around Seattle – “the best time to be here” – he will leave for Germany, where he has secured a harvest position with Ernst Loosen, owner of Dr. Loosen in the Mosel Valley. He will live in a guesthouse at the winery and work with another favorite grape: Riesling. 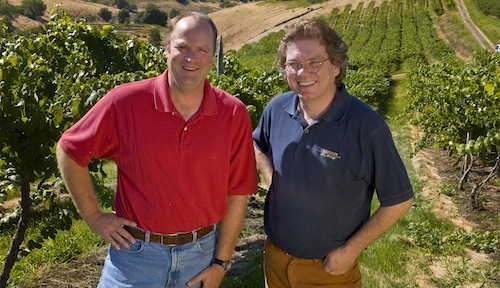 Rafanelli got hooked up with Loosen through Bob Bertheau, head winemaker at Chateau Ste. Michelle, who works closely with Loosen on their joint Eroica project. Both Rafanelli and Bertheau graduated from Boise State University, and they met at an alumni function. From there, introductions were made and Rafanelli was set to work with Loosen.

After that, he isn’t sure what he will do.

“I’m just planning the first year out and seeing where the opportunities present themselves,” Rafanelli said.

Perhaps his next stop will be New Zealand or Chile or maybe South Africa. He’s not sure, but he knows it will be in the Southern Hemisphere. Then it will be back north to Italy, France or some other classical European region.

Regardless, Rafanelli plans to pack four harvests into two years, then return home.

“I’m going to come back and be a Washington winemaker,” he said. “Washington is where I want to be.”

He is leaving on great terms, both with his former employers and the rest of the Washington winemaking fraternity.

“Marcus has been like a son to us,” said Rod Balsley, who owns William Church with his wife, Leslie. “He could bounce between hemispheres for two or three years and come back with tremendous experience.”

Balsley hopes Rafanelli lands in Argentina for a season.

“Malbec is one of the wines we’re applying our name to,” Balsley said. “Going to the source and seeing how they do it could really help.”

Meanwhile, Rafanelli is helping the Balsleys find his replacement. William Church has a good cellarmaster in place, so Balsley figures he will be fine for the next few months, but he would love to have a head winemaker in place well before harvest.

“We have some good candidates we’re talking to,” he said.

In the meantime, Rafanelli is leaving with Balsley’s full blessing.

“We wish him all the best,” Balsley said. “He has our total support on this. Anytime you can do something to better yourself, I’m behind you 150 percent.”