MEDFORD, Ore. — Oregon winemaker Herb Quady announced his resignation Sunday from Troon Vineyard to focus on his own brand and launch a custom winemaking business in the Rogue Valley.

Brian Gruber, who resigned in January as director of operations at Troon, will partner with Quady in Barrel 42. Their operation is in Medford’s historic Southern Oregon Select fruit packing/storage complex, which already provides wine storage and is home to a wine shop.

Quady said Barrel 42 will focus on small-lot production for clients as well as Quady North, which has a tasting room in Jacksonville.

“The idea is to limit our production in order to focus on high-quality wines that express the vineyard and achieve our client’s stylistic goals,” Quady said in a news release. “We will be using top-notch equipment that will allow for gentle handling, and devote a high level of attention to each lot.”

Medford already is home to a custom-crush facility — Pallet Wine Co. It is operated by Linda Donovan, who also owns her eponymous brand, which she pours at her young tasting room in nearby Ashland.

“Pallet is doing well,” Quady said. “I’m envisioning that we will be smaller, focused on only a few select clients.”

Quady spent nearly a decade as head winemaker at Troon, elevating the longtime Grants Pass winery. Meanwhile, the Martin family allowed Quady to launch his own brand in 2006, which was named Wine Press Northwest magazine’s Oregon Winery to Watch in 2012. He said he will continue to consult for Troon to ease the transition. 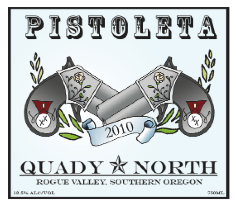 “I have a lot of respect for the legacy of Troon Vineyard,” said Quady, who arrived in 2004 after serving as associate winemaker for the acclaimed Randall Grahm at Bonny Doon Vineyard in Santa Cruz, Calif. “The Martins gave me a fantastic opportunity when they brought me on. I’m sure that the tradition of fine wines will continue.”

His approach is quite different from his parents, renowned winemakers in California’s Central Valley who are famous for their dessert wines. At Quady North, he focuses his Oregon wine project on Cabernet Franc and Rhône varieties, primarily Syrah and Viognier. His 2010 Pistoleta, a blend of Marsanne, Roussanne and Viognier, earned a Double Platinum at the 2011 Wine Press Northwest Platinum Competition.

Quady also is President of Applegate Vineyard Management, which he operates with his mother-in-law. Among the properties they oversee is Mae’s Vineyard, the estate site for Quady North which he planted in 2006.

Troon was founded in 1972 on Applegate Valley’s Kubli Bench by the late Dick Troon, who was among Southern Oregon’s first modern-day grape growers and credited as the first in the region to plant Zinfandel. He established the winery in 1993.

The Martins purchased the winery and the original 32 acres of vineyard in 2003. Two years later, they constructed a new winery for Quady and grew the plantings to 40 acres.