MILTON-FREEWATER, Ore. — The federal government has opened commenting on the proposed The Rocks District of Milton-Freewater American Viticultural Area in Oregon’s portion of the Walla Walla Valley, but geologist Kevin Pogue said his petition for the wine growing region is easy to defend.

“I designed it to be what I think is the single-most terroir-driven AVA in the United States,” Pogue told a group of wine writers last summer. “Ninety-seven percent of the ground within the AVA boundary is one soil type — the Freewater very cobbly loam — and it’s on one landform, the Milton-Freewater alluvial fan. It also has a very small range of elevation so in terms of its terroir, it is one unit … which I’m pretty excited about.”

[youtube id=”WBHubDVJbOQ” width=”620″ height=”360″]The U.S. Department of Treasury’s Alcohol and Tobacco Tax and Trade Bureau (TTB) has proposed the establishment, and comments supporting and debating Pogue’s petition run Feb. 26 to April 28. And the Whitman College professor said this area of Umatilla County has been known for its special qualities for nearly a century. Vineyards dating back to the Great Depression can be seen while driving along country roads in the area north of Seven Hills Vineyard.

“They’ve grown orchards and vineyards here since the late 1800s, and I have records that I found for my AVA petition that people were screaming how wonderful these rocks were for growing vineyards and orchards since 1916,” said Pogue, who also operates VinTerra Consulting.

Only wines made in Oregon could use ‘The Rocks’ AVA

One potential issue with wineries using The Rocks designation is that even though it is all within the Walla Walla Valley AVA, it is entirely in the state of Oregon.

By federal law, because it does not cross the state border, only wineries in Washington with a Oregon production facility will be able to use The Rocks on their labels — even if they are in the Walla Walla Valley. Of the three public comments published on the TTB website by Feb. 28, two of them touched on this restriction.

Pogue said he proposed the AVA based strictly on soil type and without regard to state boundaries.

“These are river rocks that are 100 percent basalt lava and were washed down out of the blue mountains by the Walla Walla River,” he said. “This occupies about 3,000 acres, and it fades off the north towards Walla Walla, so we drew the boundaries of the viticultural area to surround the area that has these rocky soils.”

The scale of those cobblestones fascinates wine tourists, Pogue said.

“I will get people on tours who visit and before I get a chance to say thing, they will say, ‘My god, it must have cost a fortune to get all this rock hauled in here!’ ” he said. 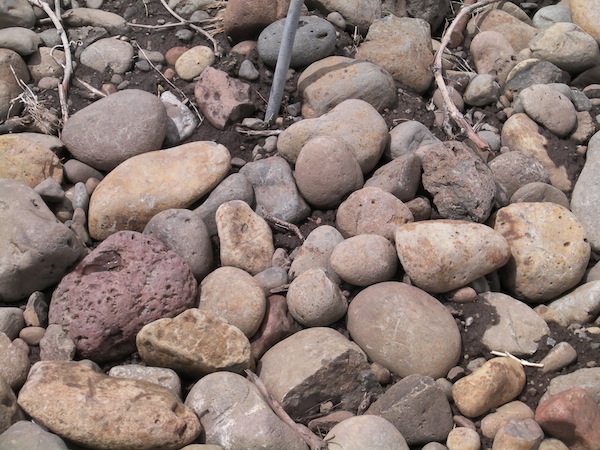 Freewater very cobbly loam soil is the profile for much of the proposed The Rocks District of Milton-Freewater American Viticultural Area in Oregon. (Photo by Eric Degerman/Great Northwest Wine)

The bi-state Walla Walla Valley AVA was established in 1984, but the concept for The Rocks District of Milton-Freewater AVA didn’t begin until about 15 years later, when Burgundy-born winemaker Christophe Baron arrived in Walla Walla to start Cayuse Vineyards, Pogue said.

“I’m not saying that just because I love my backyard,” Pogue continued. “I’m saying that because I was in Beaucastel after a heavy summer rainstorm and water was standing in the vineyards and the rocks were poking out. I thought, ‘Wow, that’s weird. How can that be with these rocks? It’s got to be incredibly well-drained.”

However, Pogue said he soon learned the layer of rock in Châteauneuf-du-Pape is just a few feet feet deep and sits upon clay.

“As anybody who has a vineyard here knows, it could rain like Noah’s Flood and there would be no water standing,” Pogue said. “The cobblestones here are on the order of 200 to 300 feet thick.”

At that point, Pogue again made his assertion for uniqueness of The Rocks.

“If they had these soils in Châteauneuf-du-Pape, they’d have trouble even growing grapes because they can’t irrigate,” he said. “They need that clay to absorb and hold the water there. Since we can irrigate, it’s great to have hyper-well-drained gravel.” 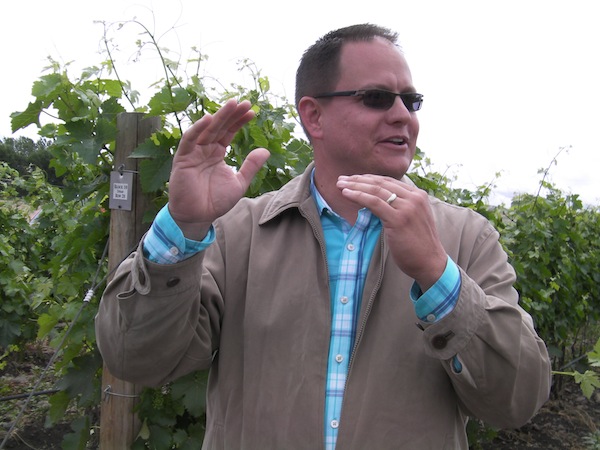 Corey Braunel of Dusted Valley Vintners describes the estate Stoney Vine Vineyard, which they planted in 2007 and is within the proposed The Rocks District of Milton-Freewater AVA. (Photo by Eric Degerman/Great Northwest Wine)

Corey Braunel, co-owner of Dusted Valley Vintners in Walla Walla, said his family purchased land from the Waliser family in 2007 and established their Stoney Vine Vineyard in the proposed AVA because of the unique aspects.

“It’s been exciting,” Braunel said. “The first wines came off the vineyard in 2010, and it’s been a very unique experience. The expressiveness in the wines … it’s like a light switch on and off.”

Stoney Vine is planted mostly to Syrah — clone 7 and clone 99 in seven by four spacing — and other red Rhône varieties such as Cinsault, Grenache, Mourvèdre, Petite Sirah but also Port-style grapes Tempranillo and Touriga Naçional.

“We’re only hanging about eight clusters per vine,” Braunel said. “The idea is to really get the crop load down and really stress the plant.”

If established, The Rocks District of Milton-Freewater would be the second-smallest AVA in Oregon, with only Ribbon Ridge in the north Willamette Valley being smaller at 3,350 acres. Washington state’s smallest AVA is Red Mountain at 4,040 acres.

Officially, Pogue’s proposed AVA would span 3,770 acres, and the area already has about 250 acres of producing vineyards.

Sean Boyd of Rôtie Cellars considered selling his land in The Rocks until he had an epiphany, Pogue said.

“He was attending a tasting group in my backyard,” Pogue said. “We had 22 Syrahs from all over the world we were tasting blind. There were four in there from vineyards within The Rocks, and maybe five of the 12 of us were able to instantly pick out the four Syrahs blind from this terroir. Sean himself was able to do it. I think he kind of believed it true. After that, he was, ‘OK, I’m planting.’ That’s really cool.” 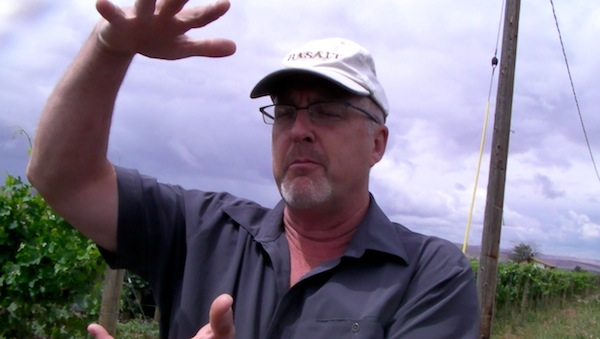 Pogue said he’s performed some “crazy research” regarding temperatures of the rocks and grape clusters. 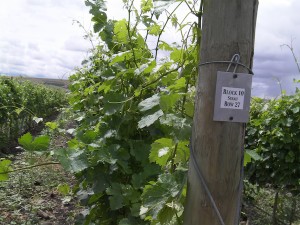 “I wanted to check up on the phenomenon that rocky soils are great for growing grapes because they heat up during the day and they keep the vineyard warmer at night,” Pogue said. “That’s crap! That’s absolute fundamental bullshit! And I’ve got the numbers to show that.

“I’ve shot these rocks with a thermal imaging monitor and got temperatures of 135-140 degrees in July,” he continued. “So yeah, they heat up very quickly, but physics says anything that heats up quickly also cools down quickly. It’s heat transfer. It works both ways.

Pogue said his research indicates clusters trellised closer to the rocks can be 2-3 degrees Centigrade warmer than if hanging over a cover crop of grass. 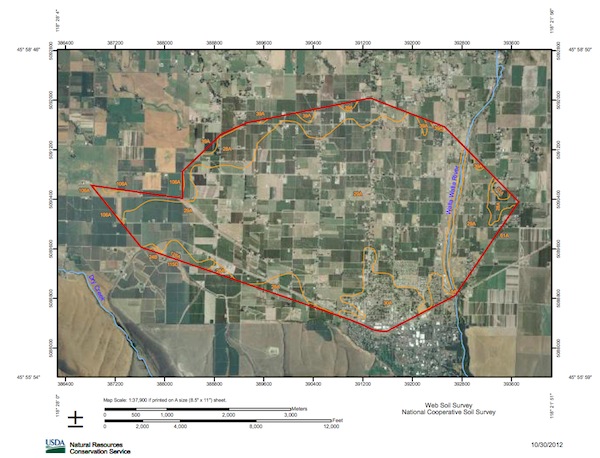 This U.S. Department of Agriculture map shows where the proposed The Rocks District of Milton-Freewater American Viticultural Area in Oregon has been drawn. The city of Milton-Freewater is in the lower right-hand portion of the map, west of the Walla Walla River. The river is responsible for the alluvial fan of cobblestones.

The Rocks District can suffer from frost damage

The heat transfer from the rocks also works in the direction of the roots, Pogue said.

“Once the heat gets down where there’s water in the soil profile, the water absorbs that heat and holds onto it,” he said. “So it heats up the soils, and it radiates heat to the vines, but it doesn’t warm the air in the vineyard at nighttime.”

That also explains why vineyards in the Milton-Freewater area have suffered from freeze damage in recent years.

“It does have an Achilles heel,” Pogue said while pointing to nearby wind machines. “It is kind of cold here sometimes in the spring and the fall, colder than the vineyards in the hills.”

It took more than 13 months from his petition to progress from the “accepted as perfected” status to the public commenting period. Karen Thornton of the TTB’s Regulations and Rulings Division is overseeing the petition that Pogue is so passionate about.

“These gravels end right at the base of the hills,” Pogue said, pointing to Heather Hill and Seven Hills vineyards. “It’s like a knife. You cross that line, and you are in a completely different soil. Chemically, texturally, thermally – everything.”