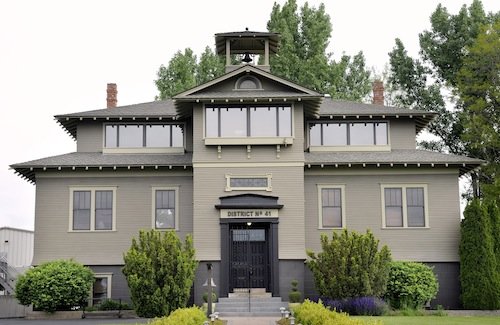 L’Ecole No. 41 is in the old Lowden schoolhouse in the Walla Walla Valley. L’Ecole is one of the oldest wineries in the valley. (Photo courtesy of L’Ecole No. 41)

Six of this region’s original winemakers will gather to reminisce and look to the future on the 30th anniversary of the Walla Walla Valley American Viticultural Area.

It might be difficult to believe that the southeastern corner of Washington wine country once was populated by so few wineries – with more than 130 operating here now – but these pioneers remain important parts of the state’s most vibrant wine region.

The 30th Anniversary Celebration begins at 6:30 p.m. at the Power House Theatre with a video presentation showing much of the valley’s history over the past three decades. Doug Charles, owner of Compass Wines in Anacortes will provide his historical perspective before a roundtable discussion with several industry luminaries.

Rick Small started Woodward Canyon Winery in Lowden in 1981. He was integral in getting the AVA approved 30 years ago and has been a tireless supporter of the region and the entire state ever since.

Marty Clubb runs L’Ecole No. 41, which was started by his in-laws, Baker and Jean Ferguson. The winery in the little schoolhouse in Lowden began in 1983 and is one of the icons of the Walla Walla Valley.

Eric Rindal created Waterbrook Winery in Lowden in 1983. Since then, many winemakers have gotten their start thanks to him. He sold Waterbrook to Precept Wine in Seattle in 2006. Rindal will be joined on stage with John Freeman, Waterbrook’s winemaker since 2005.

Casey McClellan of Seven Hills Winery is the only winemaker to start a winery in Washington, then move it to Oregon and finally move it back to Washington. His father was one of the valley’s early viticulturists, planting Seven Hills Vineyard in the 1980s.

Norm McKibben has been a key player in the Walla Walla Valley on both the winemaking and viticultural sides of the business. He is part owner (with Figgins and Clubb) of Seven Hills Vineyard. He also planted Pepper Bridge Vineyard and later Les Collines Vineyard. He owns highly regarded Pepper Bridge and Amavi wineries.

Andy Perdue, editor and publisher of Great Northwest Wine and wine columnist for The Seattle Times, will moderate the discussion.

After the roundtable discussion, several special wines will be poured alongside appetizers as participants will get the rare opportunity to mingle with Walla Walla Valley’s wine legends.