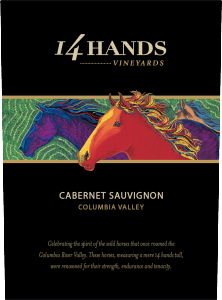 Ste. Michelle Wine Estates announced Thursday that the public can get tickets to the grand opening of 14 Hands via the winery website. Part of the year-long transformation from Snoqualmie Vineyards to 14 Hands includes the use of reclaimed wood from old barns in the Horse Heaven Hills.

“We really felt that we needed a winery and a tasting room for 14 Hands, and what better place than Prosser,” Ted Baseler, president and CEO of Ste. Michelle Wine Estates, said in a news video. “It’s the gateway to the Horse Heaven Hills.”

The centerpiece of the tasting room is a bar that takes on the motif of a saloon, and the chandelier featuring galloping horses was built in Kentucky. The Seattle office of BCRA served as the project’s architect.

Keith Kenison’s winemaking and Ste. Michelle’s sales/marketing team helped grow 14 Hands from a restaurant-only concept in 2002 into what is now Washington’s third-largest brand at more than 1 million cases — with exports to 24 countries.

According to AC Nielsen, 14 Hands ranks among the top 10 premium wine brands in the United States and is the No. 1-selling wine in the Seattle and Portland markets since 2011.

“Having a new winery for 14 Hands is almost like a little kid at Christmas,” Kenison said in the video. “It’s a place you can hang your hat.”

Kenison has been making 14 Hands at the Columbia Crest facility in Paterson from the beginning. Snoqualmie wines now are made at Columbia Crest, and Joy Andersen’s popular organic wines will be available in retail outlets, online and at the Paterson retail shop.

Ste. Michelle named 14 Hands as a tribute to the wild horses that galloped the plateau between the Yakima and Columbia rivers. They were smaller horses, standing just 14 hands high, but were known for their grit.

The 14 Hands tasting room, which will be open daily and offer complimentary samples, will feature not only the reclaimed wood, but also the stories of the families who built those barns. The facility includes outdoor seating and a barrel room for reserve tastings.

“The success of 14 Hands has been incredible,” Baseler said. “We think there’s a lot of room to run.”

This spring also marks the completion and unveiling of the Walter Clore Wine & Culinary Center, less than a mile from the new home of 14 Hands.