Hedges Family Estate on Red Mountain is owned by Tom and Anne-Marie Hedges, the honorary vintners for the 2014 Auction of Washington Wines. (Photo by Andy Perdue/Great Northwest Wine)

SEATTLE – The east side of the Cascade Mountains will be well represented in August at the 27th annual Auction of Washington Wines.

Larry and Dick Olsen of Olsen Brothers Vineyards will be recognized as the honorary growers, and Tom and Anne-Marie Hedges of Hedges Family Estate will enjoy the title of honorary vintners.

Olsen Brothers Vineyards is near the Yakima Valley town of Prosser, while Hedges Family Estate is on Red Mountain in the eastern Yakima Valley.

The honorary co-chairs, announced earlier this year, are Frank and Charlene Blethen, owners of The Seattle Times, and Marty and Megan Clubb, owners of L’Ecole No. 41 in Lowden.

Dick Olsen, a former journalist, formed Olsen Brothers Vineyards with his brother Larry in 1972. They grow 21 grape varieties and sell their crop to 28  wineries. Dick Olsen was a founding member of the Washington State Wine Commission. Larry Olsen is a past chairman of the Washington Apple Commission and was the 2004 Apple Man of the Year.

Tom Hedges, a graduate of Richland High School, launched Hedges Family Estate with his wife, Anne-Marie, in 1986. They planted their vineyard on Red Mountain in 1990 and built their French-inspired chateau later that decade. He is a past chairman of the Washington State Wine Commission and director of the Wine Institute. 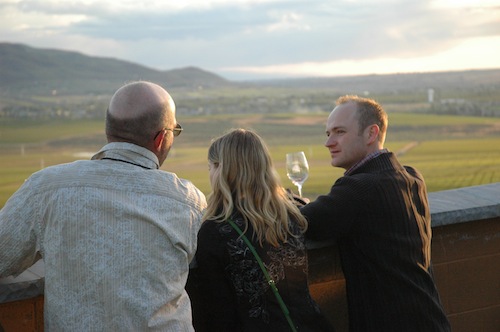 Before the Auction, however, the fifth annual Revelry on Red Mountain will take place May 24-25.

On Saturday, May 24, guests, winemakers and grape growers will mingle at Col Solare, which is co-owned by Ste. Michelle Wine Estates and Marchesi Antinori of Italy. A silent auction will take place as part of the event. Tickets are $95.

On Sunday, May 25, a guided vineyard tour will take place for the second consecutive year. Last year’s popular inaugural tour combined walking through vineyards with talks from top growers. Tickets for the vineyard tour, which includes entry to the Saturday event, are $195.

The Auction of Washington Wines begins Aug. 14 with the annual Picnic and Barrel Auction. On Friday is the Winemaker Dinner Series, followed by the Columbia Winery 10k Run and 5k Run and Walk on Saturday. The black-tie Wine Gala at Chateau Ste. Michelle will take place Saturday evening and typically draws many luminaries from the greater Seattle area.

Proceeds from the Auction of Washington Wines benefit Seattle Children’s Hospital. Since 1988, the auction has raised more than $30 million.

For more information about the Auction of Washington Wines, go to www.auctionofwashingtonwines.org