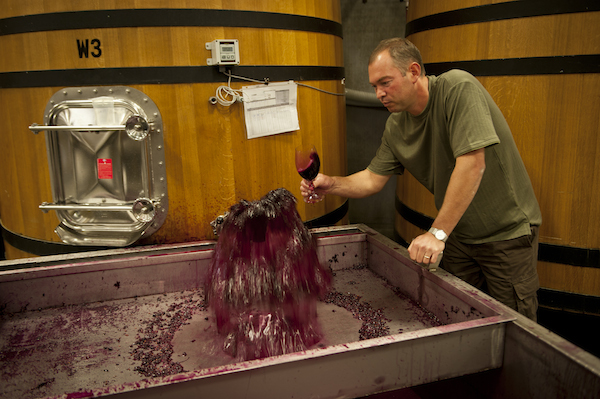 First of all, he’s French – and, well, we’re not. That’s one cool accent that gives him a certain je ne sais quoi.

And then there’s the job. He makes wine for Allen Shoup, a visionary and former CEO of Ste. Michelle Wine Estates. And he gets to make wine alongside some of the world’s greatest winemakers, assembled together to create something great with Washington grapes.

Here’s our interview with Gilles in this week’s Great Northwest Winecast.

As the winemaker for Long Shadows, Gilles works in a beautiful facility surrounded by Chihuly glass (don’t worry, it’s kept pretty far away from his barrels), and he consorts with an amazing lineup of winemakers, including:

In addition to all of this fun, Gilles crafts Chester-Kidder, a superb red blend, along with the newly released Shoup and Coté Nicault brands. He also makes the hugely popular Pinot Gris rosé called Julia’s Dazzle and a group of four wines under the label Nine Hats (to signify the winemaking partners in Long Shadows).

All in all, Long Shadows is an amazing story, and Gilles feels fortunate to be in the center of it all.

If you like what you hear, we would appreciate a quick review on iTunes.

Click here to go to find the Great Northwest Winecast on iTunes (for subscribing or reviewing).