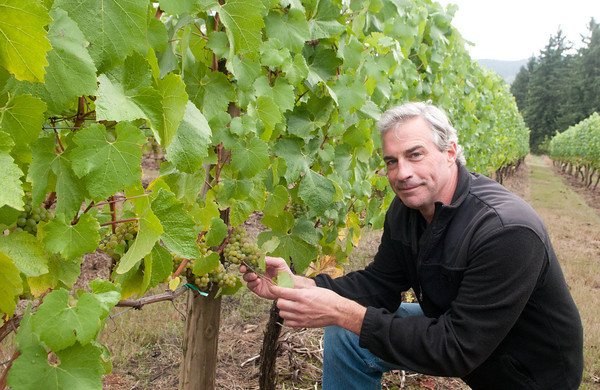 DUNDEE, Ore. — Panther Creek Cellars, one of Oregon’s most well-known brands, begins a new era Saturday when it opens the doors to its new tasting room in Dundee along bustling Highway 99.

A historic touch of the grand opening will be in the form of barrel samples of the 2013 Carter Vineyard Pinot Noir — a collaborative effort between Panther Creek’s consulting winemaker Tony Rynders and the iconic Ken Wright, who moved from California in 1986 to launch Panther Creek in downtown McMinnville.

“I am glad that Ken was open to the idea of collaborating on a wine for Panther Creek, a winery he started over 25 years ago,” Rynders said in a news release. “He is growing Pinot Noir grapes from the historic Carter Vineyard, one of the original vineyards, while I am making the wine. We have been friends and colleagues for many years, and an opportunity to further our relationship is very rewarding. This endeavor captures the spirit of the Oregon wine industry.”

Rynders’ career in Oregon has been closely tied to both Dundee and Wright. Rynders spent two years as the assistant winemaker at nearby Argyle prior to spending three years making red wine in Prosser, Wash., for Hogue Cellars.

In 1998, Rynders returned to the Dundee Hills, succeeding Wright as winemaker for Domaine Serene, one of the Northwest’s cult producers. In the next decade, Rynders posted a long string of critically acclaimed wines for Ken and Grace Evenstad before the University of Wisconsin grad launched his own winery consulting business.

Saturday also marks another important step in the Pacific Northwest for Bacchus Capital Management, which recently has made significant investments in not only Panther Creek but also in Joe Dobbes’ Wine By Joe brand in Dundee and DeLille Cellars in Woodinville, Wash.

Bacchus appears intent on innovation while its burnishes the history behind its three Northwest brands, which helps explain the concept behind the Carter Vineyard Pinot Noir.

“Tony and Ken have a history of collaboration,” said Sam Bronfman, Bacchus Capital co-founder and managing partner. “We are eager to further that relationship and to continue the tradition of Panther Creek’s outstanding wines.”

Wines from Panther Creek have helped elevate the reputation of vineyards such as Freedom Hill, Shea and Temperance Hill. On Saturday, Panther Creek will sell futures as well as offer looks at the 2012 Lazy River Pinot Noir (100 cases) and the 2012 Reserve Pinot Noir (125 cases). Rynders’ 2013 French Creek Chardonnay and library wines going back to 1990 also will be available.

Many of the older vintages would have been made by Michael Stevenson with the help of St. Innocent’s Mark Vlossak. In 2013, Bacchus purchased the 7,500-case brand from the children of the late Carolyn Chambers, the Eugene businesswoman who took over Panther Creek in 2005.

Chambers bought the winery — and the former power plant building downtown — from Iowa attorney Ron Kaplan. He acquired Panther Creek from Wright in 1994, which spurred the creation of Ken Wright Cellars in downtown Carlton.

In addition to his association with Panther Creek, Rynders also is growing his Tendril Wine Cellars brand and works on wines for Bomb Wines in Tillamook, Napa Valley’s Cornerstone Cellars program in the Willamette Valley, Saffron Fields in Yamhill, the boutique Sitar program for Dr. Madaiah Revana and the Willamette Valley Pinot Noir wines for Swiftwater Cellars in Roslyn, Wash.