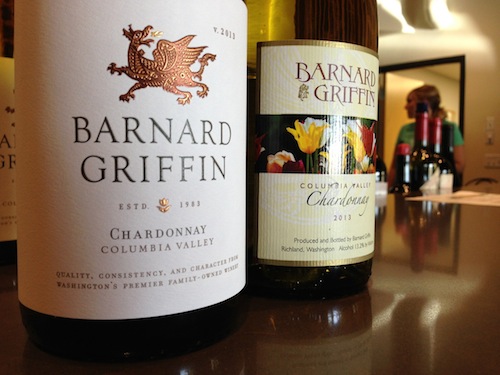 For the first time in its 31-year history, Barnard Griffin in Richland is making a significant change to its label. (Photo by Andy Perdue/Great Northwest Wine)

RICHLAND, Wash. – Tulips are out. Griffins are in.

For the first time in its lengthy history, Barnard Griffin is making a significant change to its label. The winery, now in its 31st year, is moving from its eye-catching label of colorful tulips to a more classic and austere image.

“We increasingly found that the tulip label was closing doors for us outside of the Northwest,” said winemaker Rob Griffin, own owns the winery with his wife, Deborah Barnard. “It’s time to do something different to re-energize Barnard Griffin and give our national distribution a better chance.”

The change is nearly identical to what L’Ecole No. 41 in the Walla Walla Valley went through three years ago, when it moved from a beloved children’s drawing of the schoolhouse to a label that has become an instant classic. At the time, owner Marty Clubb said he was having difficulty getting national placement for his wines because the label was viewed in a similar vein as the “critter” labels that were all the rage, particularly with imports.

Since then, L’Ecole has enjoyed much stronger national and international sales. And the winery’s longtime fans quickly accepted the new design after a brief period of lamenting the switch.

That’s what Griffin is hoping for, too. 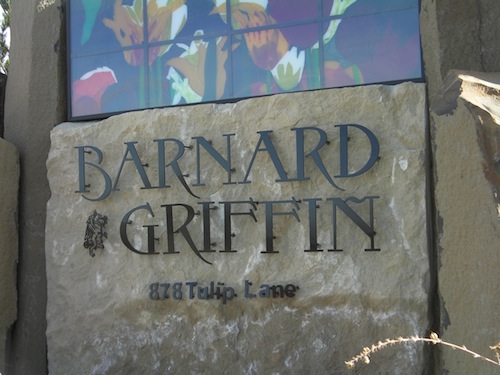 Tulips are nearly synonymous with Barnard Griffin, including its street address in Richland, Wash. (Photo by Andy Perdue/Great Northwest Wine)

Barnard Griffin launched in 1983, when Griffin was the winemaker at Preston Wine Cellars in Pasco, and six years after he arrived from California. Soon after, Griffin moved to the then new Hogue Cellars in Prosser, where he was head winemaker for several years. He left in 1991 to dedicate his effort on Barnard Griffin, a winery he has built into a 65,000-case brand that is as well known for its quality as for its modest prices.

Griffin said the original idea for the tulip label was multifaceted. Deborah Barnard wanted something floral that didn’t have an odor, and tulips fit that. Additionally, the couple visited the Skagit Valley – famous for its tulips – while they were dating. So the tulips had a personal connection as well as a Northwest flair.

And back in the early 1980s, most Washington wineries had labels with images of their winery or their vineyard – of which Barnard Griffin had neither at the time. The current tasting room, restaurant, art gallery and winemaking production facility was built in 1997.

“That label was pretty successful for us,” Griffin said. “It was different than what everyone else was doing. It was leading edge a long time ago.”

The tulip has become nearly synonymous with Barnard Griffin, with even its street address – 878 Tulip Lane – getting into the act.

The tulip label has gone through minor changes through the years, though nothing as notable as this latest transition. The process for changing the label began about 18 months ago. It was a collaborative effort with multiple design firms and many of the winery’s employees, including Barnard and Griffin’s two daughters, Elise and Megan, who now work for their parents in marketing and winemaking, respectively.

The new package is a clean white label with an embossed bronze and gold griffin prominently displayed over the winery’s name. Below that is a tiny bronze-colored tulip – a nod to the winery’s history.

Fans of the winery will recognize the griffin – a mythical creature that is known as a guardian – because it has been used for years on Barnard Griffin’s reserve wines.

Before launching the label, Griffin ran the new design past his sales team and distributors, and all have responded resoundingly positively. So far, the 2013 Chardonnay is the only wine to be released with the new label, but all the 2013 whites and 2012 reds will use the new look. Griffin said he expects the tulip label to virtually disappear within six months as current bottles on the market are sold through distribution channels.

With this being the first significant change, Griffin did not take the change lightly.

“It’s not a case of the existing label failing,” he emphasized. “It’s just a matter of staying relevant.”