GRANDVIEW, Wash. – Robert Smasne was destined to be a winemaker.

Smasne, owner and winemaker for Smasne Cellars, grew up in the Yakima Valley amid all kinds of agriculture. His family grew juice grapes and later wine grapes, and at a young age, he would sneak into famed Otis Vineyard near his home. After tasting the different varieties, his young mind would wonder why they tasted so different than the Concords his folks grew.

In this week’s Great Northwest Winecast, we sit down with Smasne to talk about his family history and his growing winemaking prowess.

Smasne started his career working at Covey Run, where he had the chance to be around the legendary David Lake, who was the head winemaker at Columbia Winery for decades. From there, he headed to Walla Walla for a few years, where he was the winemaker for Amavi and had the opportunity to work under Jean-François Pellet, head winemaker for Pepper Bridge Winery, as well as craft the wines for Skylite Cellars. 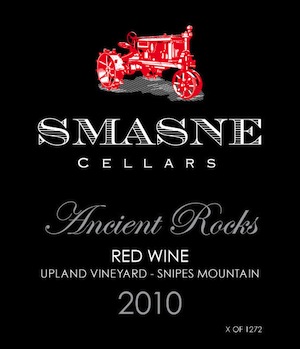 In the early 2000s, the tug of the Yakima Valley pulled him back, where he worked for Alexandria Nicole Cellars in Prosser before deciding to launch his own winery. Today, he makes more than 10,000 cases of wine for his various brands, which include Smasne Cellars, Robert O. Smasne, Farm Boy and Farm Girl. Additionally, he crafts wines for such clients as Northwest Cellars in Kirkland and Upland Estates in Sunnyside.

Smasne also uses grapes from nearly every American Viticultural Area in Washington, missing out only on the Columbia Gorge, Puget Sound, Lake Chelan and Naches Heights.

In the past few years, Smasne has been on a remarkable run, winning many, many top medals at regional, national and international wine competitions. In the past three years, his wines have won about a dozen Platinum medals at Wine Press Northwest magazine’s year-end best-of-the-best wine competition.

One of Smasne’s new projects is Tudor Hills, a new brand that uses grapes from Otis Vineyard – that vineyard he snuck into as a young child. Otis is home to some Cabernet Sauvignon vines that were planted in the 1950s, making them the oldest Cab vines in Washington.

Smasne’s winemaking facility in the Yakima Valley is not open to the public, but he does have tasting rooms in Woodinville’s Warehouse District and in the Tri-Cities in Kennewick’s Southridge neighborhood.