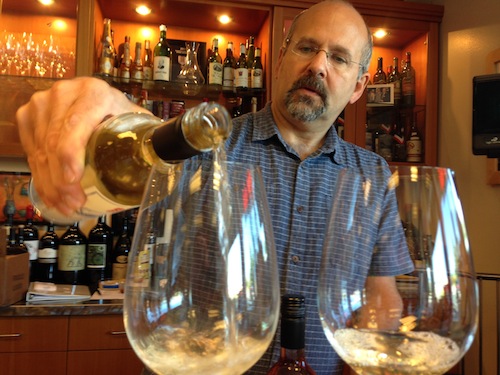 ANACORTES, Wash. – When Doug Charles decided to launch a wine shop, the longtime Washington wine advocate and expert was pretty sure about exactly what he wanted.

He had a great plan for everything – except a name.

“We ran out of ideas and needed a name really quickly and figured (Compass Wines) had kind of a nautical theme,” Charles told Great Northwest Wine. “So it was one of those accidental names. You bounce things around, and finally you realize you have to open the shop, so you just come up with a name.”

Charles left almost nothing else to chance, however.

We headed to his shop in Anacortes for this week’s Great Northwest Winecast. Here’s the interview.

Charles became involved in the wine industry in 1978, when he began working at Domani, a restaurant across from Bellevue Square. From there, he moved to Pullman to enter what now is the Washington State University hospitality program before going to work at other restaurants and resorts.

Early on, he was impressed with the emerging Washington wine industry, including Leonetti Cellar, Woodward Canyon Winery, Chateau Ste. Michelle and Columbia Winery. So Charles made a decision to focus on local wines – long before it ever became fashionable.

“I took Washington as what I wanted to focus on starting at that time and have been a Washington drum beater ever since,” he said.

After graduation from WSU, Charles worked at famed Rosario Resort and Spa on Orcas Island and eventually landed at the Oyster Bar and Oyster Creek Inn on beautiful and romantic Chuckanut Drive south of Bellingham. He ran the wine program at these fine dining establishments from 1986 to 2000. 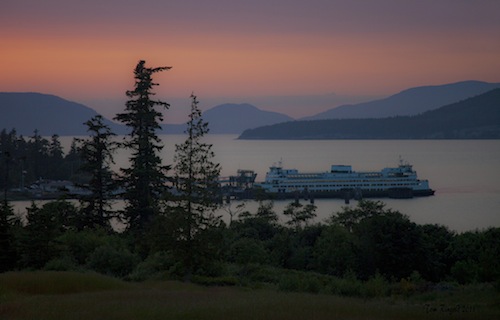 The beautiful San Juan Islands rise above the Anacortes ferry. (Photo by Tom Ringold via Flickr/click image for credit)

Then he decided to launch a wine shop. While choosing a name ended up being somewhat haphazard, finding a location was not. In fact, Charles spent 18 months scouring locations from the Canadian border to the Mexican border to find the best place to properly store wine. At the time, he was consulting with companies that put wine cellars on mega-yachts.

“The idea was to build a storage/retail facility in a marine environment,” he said. “So we looked all the way up and down the coast, and everything pointed right back to Anacortes in terms of weather patterns, in terms of traffic flow, bank deposits, discretionary income spending and all of those sorts of things.”

Charles wanted to take advantage of the 16,000 cars per day that drove up and down Commercial Avenue in Anacortes, many of which were heading to the Washington State Ferry terminal that goes from Fidalgo Island to Vancouver Island (and several San Juan islands in between).

“So all of our research told us we needed to be on the east side of Commercial Avenue between 12th and 17th,” he said. “A spot came open at 14th, so that’s how we ended up right here.” 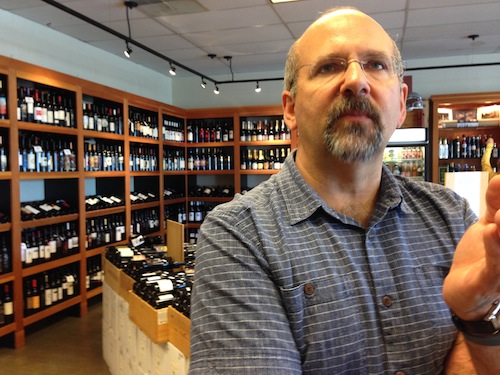 From the beginning, Charles took the customer service aspect of the restaurant business and applied it to wine retail.

“Our goal has always been customer service,” he said. “We have built a clientele base that wants to come in and meet certain sales people, much like you have a favorite waitress or waiter in a restaurant. The idea was to get people in here once as they are going to the ferry and make them repeat customers. It’s worked out really, really well for us.”

While Compass has an active website, Charles gets almost no sales directly from it. He thinks people have been burned too many times by online sales, so he uses the site as a launching pad for his more personal brand of selling wine.

And Compass also carries an amazing array of wines. At any given time, Charles has about 2,000 different wines for sale – many of which are available no where else. To ensure this, he won’t carry wines that are sold at groceries or wine discounters.

“We need to be different,” he said. “We can’t have the same wines as Costco.”

When he opened Compass Wines in 2000, he had about 10,000 bottles – an extremely deep selection that goes against conventional wisdom.

“We’ve built the business around the model of having lots of inventory, which is atypical,” he said. “We wanted to have a really, really deep vintage selection of Washington, which nobody was doing, and then a deep selection of vintage wines from around the world, which really not many people in Washington were doing.”

To accomplish this, Charles purchases private cellars. Sometimes these are collectors who need to liquidate – so to speak – or family members selling the wines of a loved one who has died.

One time, a woman walked into his shop to sell her late mother’s wines. Two of the first bottles she presented were Chateau d’Yquem from 1929 and 1949.

“That was probably the most stunning that we’ve ever seen,” he said. “We’ve picked up some amazing wines through the years. There are some pretty amazing things out there hiding in people’s basements.”

Charles also will purchase current releases of top wines, then cellar them for years before putting them on the shelf.

“It gives our customers a little bit more variety,” he said. “It could be a current release of Quilceda Creek or a 1989.”

Want a bottle of Leonetti or Cayuse? They’re all on the shelves at Compass Wines.

When Washington state voters passed Initiative 1183 – which put state government out of the liquor sales business – Charles was one of the few retailers who saw an upside to it. He thought it would actually help his business because no big retailer would ever try to match his inventory depth and quality.

Part of this is the relationship he built with his customers, but it also doesn’t hurt that he’s “in the boonies” where BevMo and Total Wine & More won’t likely open outlets.

The only down side for his customers is they can’t easily find specialty liquors in the Anacortes area. Unfortunately, Compass Wines cannot sell spirits because its square footage is less than 10,000 square feet – the minimum size for a private liquor store in Washington.

“Up here, there’s a void,” he said. “It’s affected our customers more than it affected us.” 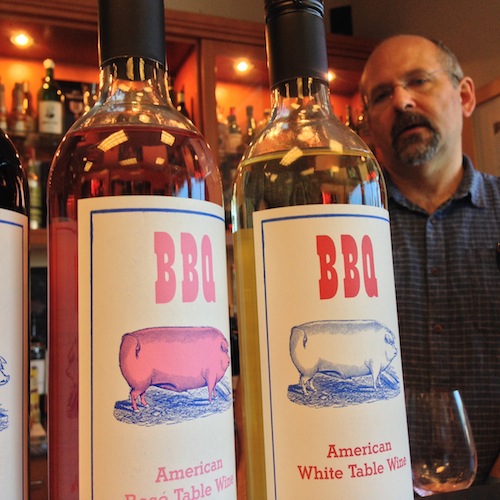 Something Charles never expected to become was a winemaker. Technically, he still isn’t. However, he has become a négociant who has created two successful wine brands.

Ded.reckoning – a nautical term related to a compass – was launched when Alex Golitzen, owner of Quilceda Creek Vintners called him up and offered to sell him a few barrels of some great Cabernet Sauvignon that didn’t fit into his program.

“That’s how the brand was born,” Charles said.

These days, Charles works with many of the state’s top winemakers, including Leonetti Cellar’s Chris Figgins, to create ded.reckoning. One of those, a limited-edition 15-year tawny, earned a top Platinum award in Wine Press Northwest magazine’s year-end best-of-the-best competition.

“BBQ was born because there was no wine designed for the classic American food of barbecue,” Charles said.

The no-oak, consumer-friendly red, white and pink wines were sold exclusively at Compass Wines. But now other retailers have picked them up, making them even more accessible.

“I never expected to do that part of the business,” he said.

To contact Compass Wines, go to the website, call 360-293-6500 or find it on Facebook. Compass Wines is open daily. The address is 1405 Commercial Ave. in Anacortes.