The Wahluke Slope is part of the North Central Washington wine country and is one of the most important growing areas in Washington. (Photo by Andy Perdue/Great Northwest Wine)

WENATCHEE, Wash. – Washington’s original wine country is on the comeback trail, and an August event will put it on display.

The North Central Washington Wine Awards will take place Aug. 23 at the Town Toyota Center in downtown Wenatchee and will highlight some of the best wines in this region of the state.

The event includes many of the award-winning wineries alongside appetizers from regional restaurants, sort of a scaled-down Taste Washington.

This year’s competition, which was conducted by Great Northwest Wine, drew 244 entries from 37 wineries in Douglas, Chelan, Okanogan and Grant counties. 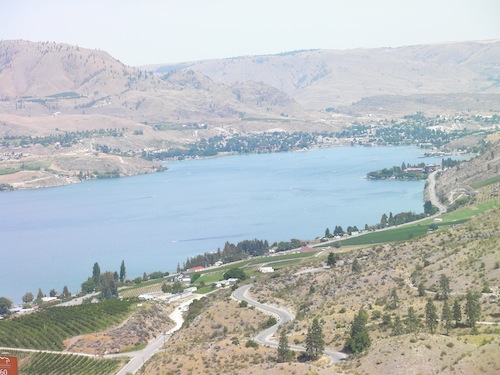 Wine grapes were grown along the shores of Lake Chelan late in the 19th century. (Photo by Andy Perdue/Great Northwest Wine)

Though the Wenatchee, Leavenworth and Lake Chelan areas have only been developing for the past 15 years or so, these regions make up Washington’s original wine country.

In 1875, Philip Miller opened a winery in Wenatchee. According to The Wine Project by Ron Irvine, his winery operated for one year.

And as early as the 1890s, a thriving wine grape industry existed on the shores of Lake Chelan. Though those vineyards ultimately were replaced by apple and cherry orchards, the wine industry in Lake Chelan reappeared in 1998 and has since grown to more than 20 wineries and nearly 300 acres of vineyards.

For the entire North Central Washington region, about 70 wineries are in operation today.

Here are the best-in-show awards for the competition’s first three years: