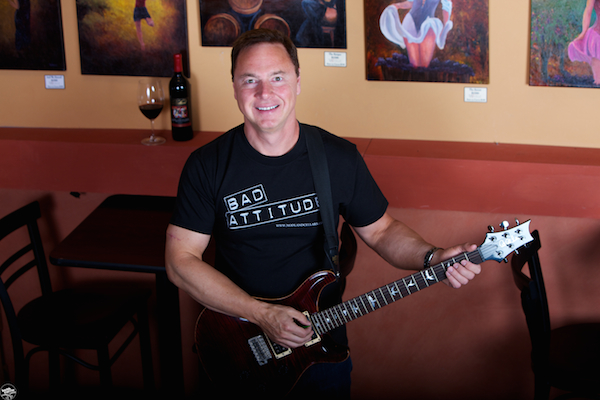 Tim Nodland, winemaker of Nodland Cellars, grew up in Spokane and put himself through Washington State University as a touring guitarist during the 1980s. He later earned a law degree from Gonzaga University. (Photo by Keith Currie Photography/Courtesy of Nodland Cellars)

SPOKANE, Wash. — Spokane’s historic downtown already has a trendy Cork District, but Tim Nodland also will join the cluster of music venues amid the wine scene when he opens a jazz club inside his new tasting room for Nodland Cellars.

“It will be a traditional tasting room in the afternoons for serious and not-so-serious wine lovers to enjoy, but in the evening it will be transformed into a jazz night club,” Nodland told Great Northwest Wine.

Early next year, Nodland Cellars plans to begin pouring wine and promoting live music at its 1,741-square-foot space on the ground floor of the Chronicle Building at 926 W. Sprague Ave. Across the street is the Knitting Factory Concert House and kitty-corner is the Martin Woldson Theater at The Fox — home of the Spokane Symphony.

A block to the east is the iconic Davenport Hotel, which celebrates its centennial this month. Kirkland Cutter, the region architect who was hired by Louis Davenport, also designed the Chronicle Building in 1927 for the afternoon newspaper. Nodland’s landlord is Centennial Properties, which is owned by Cowles Co. — the four-generation publisher of The Spokesman-Review.

“It was built back when they built things to last, and the detail inside is amazing,” Nodland said. “It still has that communication theme in the hallways, and there are the gargoyles on the roof.”

Building turned into office space after newspaper folded in ’92 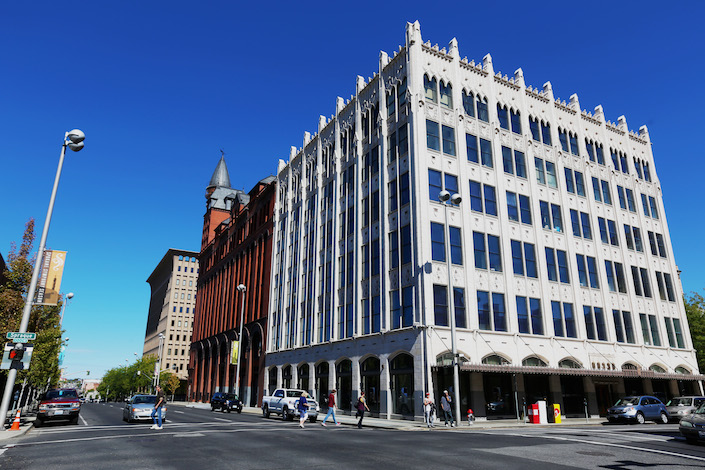 Spokane attorney Tim Nodland will create a jazz club and tasting room for Nodland Cellars in Spokane’s Chronicle Building. The historic home of the shuttered newspaper was designed by Kirtland Cutter, whose architecture includes the nearby Davenport Hotel and the Rainier Club in Seattle. (Photo by Tim Robinson/VisitSpokane)

Nodland Cellars’ arrival is another step in the movement to preserve Spokane’s historic downtown. The Chronicle Building published its final newspaper in 1992 and before a less fascinating role as office space.

Spokane’s downtown wine scene features nine wineries within walking distance, and Nodland will provide the fifth tasting room experience. Barrister and Robert Karl served as wine-production pioneers, but the restoration of the Davenport paved the way for downtown wine touring. Recent work behind the scenes by Spokane city councilman Michael Allen has convinced civic leaders that marketing Spokane’s emerging wine industry will lead to increased tourism and help with the tax coffers.

“These are all within walking distance, sort of like downtown Walla Walla,” Nodland said. “And Mike predicts that it’s only going to continue to grow. There will be more upscale restaurants and shops, and more casual places for food and breweries. There’s less risk now involved with moving downtown, and Mike’s got a good handle on promoting the whole area. We all like the idea of a walking wine tour.”

Nodland’s stated goal is to revive much of the spirit that filled Ella’s Supper Club, a third-floor nightspot across First Avenue from the Fox. It closed in 2008 after a five-year run.

“Those were fun days, and I can’t wait to do it again,” Nodland said.

There will be ample talent to choose from, he said, pointing out that each of the Spokane-area colleges promotes jazz. Nodland’s own band plays what he bills as fusion rock — and he’s also got his eye on a local reggae band and some funk bands — but he’s been a supporter and participant of Spokane’s local jazz scene.

Jazz guitar hasn’t always been his focus, though. Nodland spent the 1980s as part of the West Coast hairband craze. About the time he cut his brown locks and transitioned into a band manager was when the Washington State University grad started to pursue his law degree from Gonzaga. He’s now a personal injury attorney who specializes in medical insurance cases. 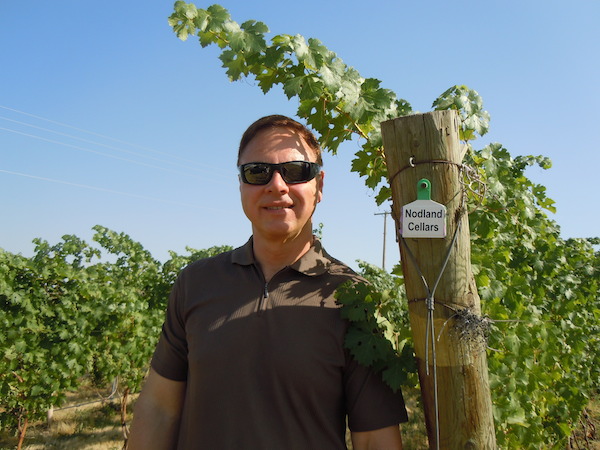 Tim Nodland of Nodland Cellars in Spokane relies on vineyards in the Walla Walla Valley such as Pepper Bridge and Seven Hills as well as Gamache Vineyard near White Bluffs of the Columbia River. (Photo courtesy of Nodland Cellars)

That work pays for his winemaking. Just as nearby Arbor Crest Wine Cellars does, Nodland will continue to making wine near the Spokane River east of downtown, working at the Montgomery Street industrial park in Spokane Valley where he’s been since 2005.

While the move of his tasting room will create work space, Nodland said he plans to keep his production at around 1,000 cases. He remain devoted to Pepper Bridge and Seven Hills vineyards in the Walla Walla Valley, Gamache Vineyard near the White Bluffs of the Columbia River, and Yakima Valley sites Dineen and Sheridan.

“No matter what we do, the wine comes first,” Nodland said. “It’s an art form, and the day it becomes a job I’ll quit. There is something really special about living in Northwest, and we have such great grape growing conditions here. And I really love the opportunity to meet new friends who come into our tasting room and being able to share a glass of wine with them.”

His winemaking for the 2014 vintage begins later this week when he expects to pull Merlot off Seven Hills. He’ll end harvest with Riesling from Gamache later this fall.

He hopes to be open for wine and music in early 2015. He’s signed the lease for his space at the Chronicle Building and is working on satisfying all the other legal requirements. The tasting room and stage will come first. The music venue will be intimate, with seating for no more than 60. And while he’s cutting out space for a kitchen, he’ll open up with cheese plates and prepared food before developing the restaurant.

“The ultimate goal of fine dining is probably a few years away,” he said.