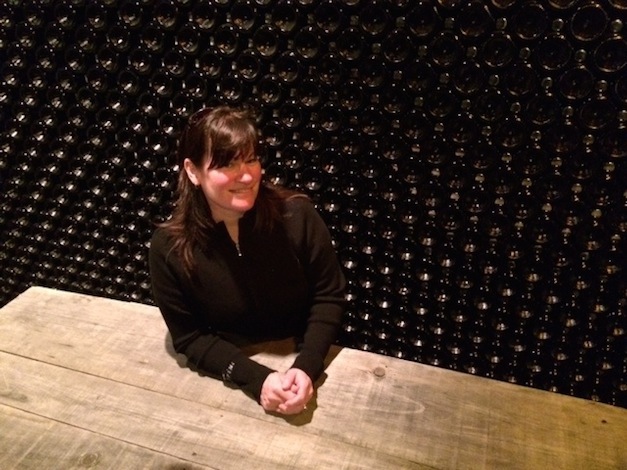 Mary McDermott left Trius Winery at Hillebrand in Niagara-on-the-Lake, Ontario, to take over the winemaking at Township 7 Vineyards and Winery in Penticton, British Columbia. (Photo courtesy of Township 7)

“Sparkling wine will be a main SKU for us, and we’re going to look at single-vineyard bottlings and other things across the board,” general manager Mike Raffan told Great Northwest Wine. “Seven Stars will still be the flagship, which is Chardonnay and Pinot Noir, but under her leadership we’re open to anything.”

McDermott spent the past four years in Niagara working for Peller brands Gretzky, Thirty Bench and Trius Winery at Hillebrand, which has a history of award-winning Chardonnay, Riesling and sparkling wines. There she was in charge of the day-to-day winemaking, and her work extended well beyond 100,000 cases a year, Raffan said.

The sparkling program for Trius was 25,000 cases annually, which made McDermott the largest producer of premium bubbles in Canada. Township 7 produced just 55 cases of its 2008 Seven Stars sparkling wine.

It’s been a year of major change at Township 7, founded in Langley in 2000 and purchased by Raffan in 2006. This spring, he and his wife, Lori, sold their winery and vineyard in Penticton, along with their tasting room in Langley, to a Vancouver-based company. Not long after, longtime winemaker Bradley Cooper moved farther north on the Naramata Bench to Serendipity Winery, where he’ll also continue to nurture his small Pinot Noir brand Black Cloud. 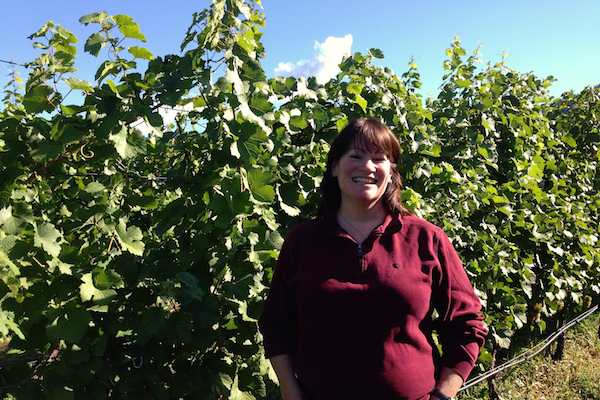 Mary McDermott, standing in front of Gewürztraminer vines, is in her first crush as winemaker of Township 7 Vineyards and Winery in Penticton, British Columbia. (Photo courtesy of Township 7)

“I’m thrilled to start working within a tight-knit community and pursue my lifelong dream of crafting small production wines in the Okanagan Valley,” McDermott said in a news release. “I feel like all the stars have aligned to bring me the opportunity to work on the prestigious Naramata Bench at Township 7. It’s exciting to fully leverage everything I’ve learned in my winemaking skill set over the years and combine that with the fresh and creative approach of the West Coast.”

“She’s very hands-on on the vineyard,” Raffan said. “She’s out there every week, and — unless you are in Napa Valley, where I don’t know if you can screw it up — it all starts in the vineyard.”

Her inspiration to pursue a winemaking career began in Vancouver as a sommelier at former False Creek landmark Monk McQueens Fresh Seafood and Oyster Bar. She returned home to Ontario, where McDermott earned a degree in viticulture and enology from Brock University in St. Catharines, Ontario. She started at Stratus Vineyards and moved on to Cave Spring Cellars before being hired in 2010 by Peller.

Trius, founded in 1979, made history as the first winery in Ontario to produce ice wine. The winery was purchased by Andres — now Andrew Peller Ltd. — in 1994. Trius, about 30 miles north of Buffalo, N.Y., ranks as one of Ontario’s largest wineries with more than 200,000 visitors a year.

“I’m really excited,” Raffan said. “She’s coming to us from a big company, so I’ve got someone who’s had so much experience and gets the business side. She’s going to hold our feet to the fire.

“This is her breakout, and it’s up to us to keep her happy,” he added.

At Township 7, there are plans to increase not only its bubbles, but also the small lot and vineyard-designate programs with sites on the Black Sage Bench, Okanagan Falls and the Similkameen Valley. Last year, they produced 6,500 cases.

Raffan, who has a contract to continue managing the winery, said Township 7’s new ownership already made an increased investment in the barrel program at the Naramata Bench production facility, including large barrique fermenters. And now they’ve made a multiyear commitment to McDermott.

“We are just about quality wine, and Mary has demonstrated her prowess in producing excellent wines from a variety of classic vinifera grapes in often very challenging growing conditions,” Raffan said. “Her relentless focus on continuous improvement will help steer us as we evolve in the coming months, particularly with her plans to enhance our Bordeaux reds program at a world-class level.”