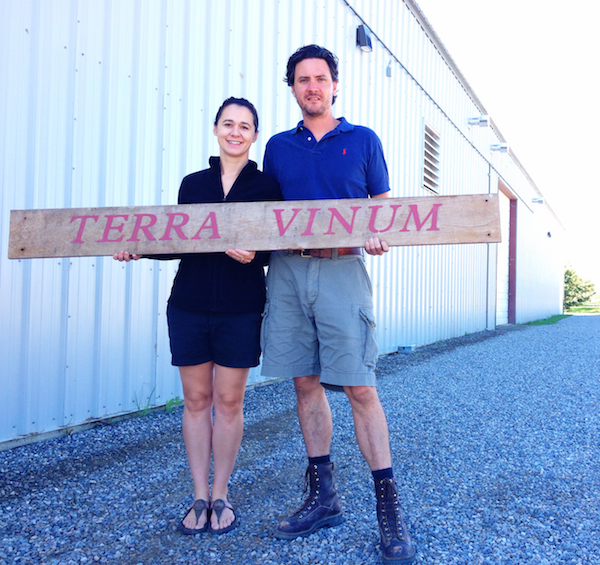 Amy and Kyle Johnson own and operate Terra Vinum, the parent company for their Purple Star and Native Sun labels. They will produce both wines at their new facility in Benton City, Wash. (Photo by Eric Degerman/Great Northwest Wine)

BENTON CITY, Wash. — Soft-spoken Kyle Johnson, one of Washington state’s most talented winemakers, is no longer a vagabond vintner.

It’s been six years in the making, but last week, he and his wife, Amy, began crushing fruit for their Purple Star Wines and Native Sun projects at their new facility in Benton City. They also will continue to craft the small-lot Washington wines for Seattle-based Vinum Importing and Distributing’s acclaimed For A Song brand and handle some custom-crush work as part of their 180 tons this year.

“This is close to fulfilling a dream,” he said. “We’re getting there. We are very excited. It’s just big step.”

They hope to officially open their tasting room Oct. 11 in time for Wine Yakima Valley’s Catch the Crush weekend. Their Roza Road location — set up to handle 20,000 cases per year under their umbrella company called Terra Vinum — is smack-dab between Red Mountain and Prosser, two growing regions where they’ve achieved much of their success. 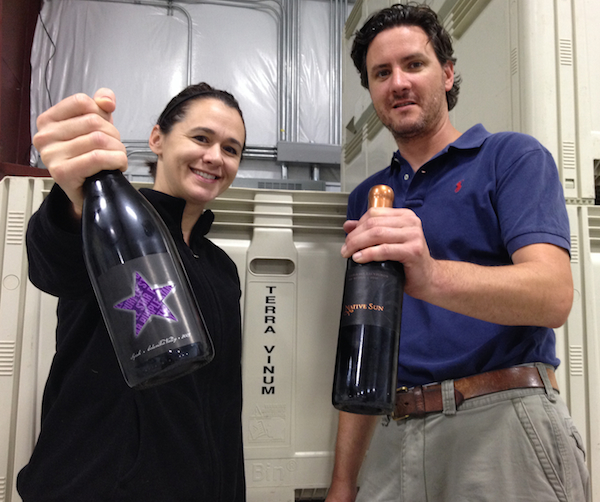 The move into the former fruit-packing warehouse also allows them to spread their wings after spending several years working on their own wines in nearby Richland under the roof of Wine Boss, operated by the acclaimed Charlie Hoppes.

“It was hard for me because I didn’t want people to think that Charlie was making our wine,” Kyle said.

Amy said, “Charlie was fantastic to us, but we’re trying to make a name for ourselves. Now, we can start stretching our legs and getting our story out there that this is family owned — it’s just Kyle and I and our kids.”

They plan to continue participating in the Cellar 55 Tasting Room, a collective in Amy’s hometown of Vancouver, Wash., with Basel Cellars, Five Star Cellars and Gordon Estate. Principals are expected to appear at least once a quarter at the tasting gallery, which means Amy’s folks get to see grandchildren several times a year.

“That co-op tasting room seems to be picking up speed,” Amy said. “People are going back to downtown Vancouver, and there are a couple of wine bars now. We’re excited about it.”

WSU grad grew up in Tri-Cities, trained at Ste. Michelle 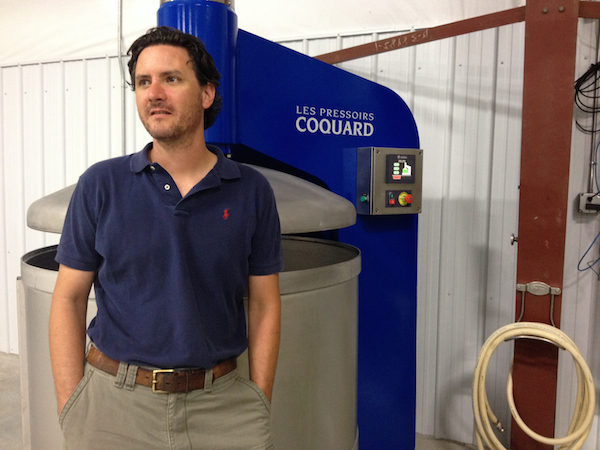 Johnson’s roots in Eastern Washington run deep. He graduated from Kamiakin High School in Kennewick and went through Washington State University’s horticulture program before landing at Ste. Michelle Wine Estates in 2000. Two vintages later, he joined the winemaking team at their Canoe Ridge Estate red wine facility. One of his interns — Juan Muñoz-Oca — is now head winemaker at Columbia Crest.

In addition to picking up a degree at WSU, Kyle also began dating Amy, who provided him with heavily discounted beverages as a regular customer of hers at the downtown Pullman tavern where she tended bar. Her degree in animal sciences led to a management position with in animal pharmaceutical industry until they started their family. These days, she’s often seen wearing purple in public.

“I grew up on a dairy and thought I was going to run a large production farm,” she said. “Then a couple of beers with this dude, and now I’m making wine.”

Kyle’s big break came in 2006 when he left Ste. Michelle to make wine for Olsen Estates, a showpiece winery in Prosser’s Vintners Village. He produced some of Washington’s top wines during the brief lifespan of Olsen Estates and second label Olsen Hills until the Olsen brothers — Dick and Larry — ended wine production with the 2009 vintage on the heels of the recession and distribution issues.

“I think the winery for the Olsens really did what they wanted when they first set out, which was to showcase their vineyards, and now they have all these higher-end small wineries buying from them,” Kyle said. “That’s been a big positive.”

The Olsens allowed him to use their facility for the debut vintage of Purple Star in 2008 as well as the 2009 and 2010 vintages of Native Sun. Meanwhile, the Olsen Estates production facility sits idle.

“The Olsens were always great to us — and they still are,” Amy said. “It was a shame. We thought about moving back in there a couple of times, but we could get the numbers to work.”

And in a roundabout way, Kyle can credit Olsen Estates for the introduction to Hoppes, whose own brand is Fidelitas on Red Mountain.

“It was on a barrel trip to France, and Charlie and I sat next to each other over and back,” Kyle said. “We had some time to talk.” 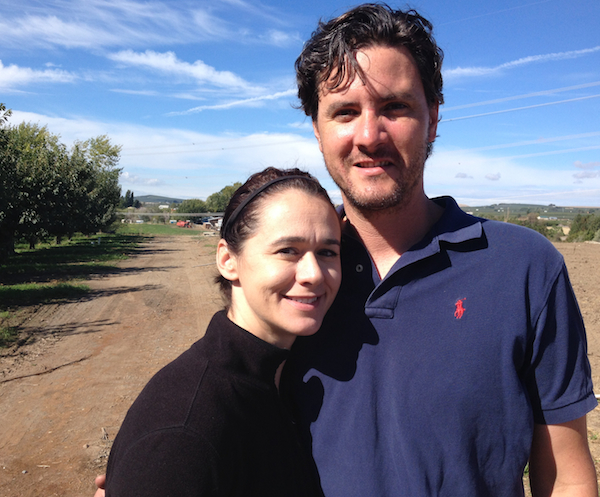 Amy and Kyle Johnson have moved into their new production facility in Benton City, and Olsen Brothers Farms can be seen on the horizon to the west. Johnson used his Ste. Michelle Wine Estates training while making award-winning wines for Dick and Larry Olsen in nearby Prosser. (Photo by Eric Degerman/Great Northwest Wine)

The Johnsons created Native Sun to showcase vineyards on Red Mountain, and the limited bottlings center on Cabernet Sauvignon and Petit Verdot. His debut 2009 Cabernet Sauvignon from Heart of the Hill Vineyard merited a gold medal at the 2013 Great Northwest Wine Competition.

“The treatment in the cellar requires a lot more attention because we don’t inoculate, and we use all new barrels,” he said.

Native Sun likely stands to benefit the most from the spotlight in the Johnsons’ Benton City tasting room because of the price point and small production. They christened his two-ton, French-made Bucket Press from Coquard on Sept. 25 with Klipsun Vineyard Merlot off Red Mountain, and they got recruited by Hoppes to join the Red Mountain AVA Alliance.

“We started Purple Star because we needed that grocery store-friendly, very solid wine that always gets good reviews,” Amy said. “You see it on the shelf; it’s got a nice, shiny label, and you aren’t afraid to spend $18 for the Syrah. It will always be $20 and under.”

Purple Star also provides support to Seattle Children’s Hospital by donating 15 percent of proceeds to uncompsenated care. The continued expansion of East Coast distribution for those wines helps broaden awareness to their cause.

“In the wine industry, we have a pretty good life compared with most people,” Kyle said.

Amy added, “Kyle was treated there when he was a kid, and so was his grandma. I have three nephews who have been treated there. They take care of the whole family, not just the child.”

There’s even a child’s touch to the Purple Star label. Their daughter, Karma, is credited with creating the prototype for the popular logo when she was just 5.

“So we started Native Sun with native ferment and the sun — Red Mountain — and we needed something to fit in with that, so we began working with the star,” Amy said. “We’d discuss ideas, and the kids would then draw.

“Luc drew a Ninja Turtle with the mask. Broden drew a glass with a stick lady sitting in it,” she continued. “Karma drew a star with all the rays coming out if it, and I thought, ‘It’s genius. It’s absolutely genius.’ So we sent it back to our branding guy, and he cleaned it up and made it look great.” 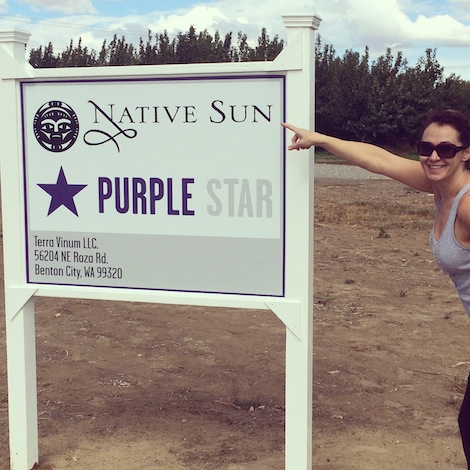 Until this fall, Sleeping Dog Wines was the lone wolf when it came to tasting rooms near the Old Inland Empire Highway west of Benton City. Now, there are two wineries about a mile apart on opposite sides of Corral Creek Road.

“The more the merrier,” said Sleeping Dog owner/winemaker Larry Oates, who produces about 500 cases annually. “They are a nice couple, and the wines of theirs that I’ve had over the years I’ve really enjoyed.

“He’s a friendly guy and has come down to our winery a couple of times to say ‘Hi.’ I’ve been derelict to return the favor,” Oates added. “For some reason, I’ve been a little busy.”

Next year, the Johnsons will be even busier as they plan to produce about 20,000 cases among their various projects.

They hinted at a mid-tier label tailored to East Coast customers, and a red blend is on the drawing table, too.

“He did the Rouge de Coteaux for the Olsens, it was Syrah, Cinsault and Mourvédre, — a Rhône style — and it was absolutely delicious,” Amy said. “I think he should make that again.”

They continue to get fruit from the Olsen family, and the Johnsons also thank Hoppes for introducing them to one of his friends — who became their landlord. Terra Vinum leases the building, retrofitted into a winery, from Peter Douglas of multi-generation Douglas Fruit in Pasco.

“Pete built us this shiny building, but we won’t have a shiny tasting room,” Amy said. “That’s kind of our story, and that’s who we are.”