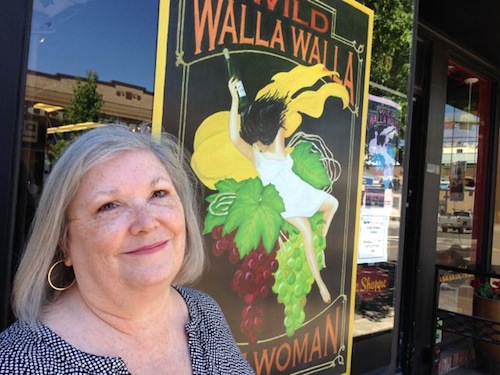 WALLA WALLA, Wash. – This region’s original wine blogger now has written the book on the history of the Walla Walla Valley wine industry.

Wines of Walla Walla Valley: A Deep-Rooted History has just been published, and author Catie McIntyre Walker is beginning to promote it. The book, which retails for $20, is part of the “American Palate” series by History Press of South Carolina.

“I’m excited, but I don’t think it has hit me yet,” Walker told Great Northwest Wine.

“I immediately said I was interested because I already had the first chapter done,” she said.

When Walker launched her blog in 2005 – making it the first in the valley – she did so with the idea of someday writing a book.

“I hoped it would lead to a book,” she said. “But I had no direction.”

In 2010, Walker opened a wine shop – also called “Wild Walla Walla Wine Woman” – in downtown near the Marcus Whitman Hotel. She knew when she opened the shop that it would be a five-year pursuit.

“I didn’t want to do this forever,” she said. “So I decided at that point that by the end of five years, it would be sold or I would close it unless it was hugely successful.”

Business was good for Walker, even though she was surrounded by more than a dozen tasting rooms in the downtown Walla Walla wine district. But after Washington state voters passed Initiative 1183 in November 2011, everything about the alcohol industry changed. Walker had greater difficulty getting the wines she wanted to sell – sometimes because Costco had the ability to undercut her orders. Some distributors even told her it wasn’t worth their effort to bring wines across the state and if she wanted something, she could come get them herself.

“It was a good excuse to move on,” she said. “It is supposed to be fun, but it became a big pain.” 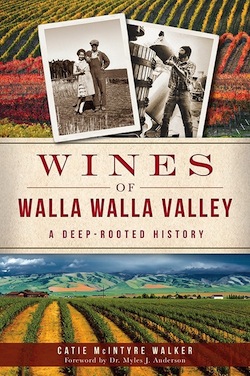 With all of her effort in making the wine shop a success, Walker had little time to write her blog, so she put it on hiatus. When the book deal came along from History Press, that gave her even less time.

But in the past few weeks, Walker has relaunched Wild Walla Walla Wine Woman, updating it once or twice a week. She said she plans to expand her coverage by occasionally writing about wines from outside of Walla Walla – or even the United States.

During the book-writing process, Walker decided to include recipes from chefs, winemakers and winery owners in the valley. That led to a series of events she has been unable to stop thinking about.

As she was procuring recipes from around the valley, Walker decided she had to have one from Eric Dunham, founder and head winemaker for Dunham Cellars.

“I got to thinking that Eric was quite a chef,” she said.

During the editing process, one of the History Press editors wanted to cut the Dunham recipe because it was quite different in style than others in the book. This was at the end of September.

“I said I’d think about it,” she said. “It bothered me that Eric’s recipe was cut. It kept bugging me. I didn’t know why, but I decided I couldn’t publish this book if one of Eric’s recipes was not included. I had this nagging feeling.”

So she went back to the winery, got another recipe and made sure it was included.

A month later, Dunham died, an event that shocked the entire Washington wine industry. Walker still isn’t quite sure why she went to that extra effort to include his recipe, but she is now thankful she did because it will stand as a happy memory from a young man whose life was tragically cut short.

Though Wines of Walla Walla Valley has been available for only a week, it’s already a hit, according to History Press editors. Amazon, Barnes & Noble and Powell Books in Portland all have it available, and it is on its way to being distributed in tasting rooms throughout Walla Walla Valley wine country.

Next week, Walker will make several appearances to promote the book and sign copies for fans. Here is her schedule:

Walker said she doesn’t have any other book signings set up yet, but she plans to actively promote it during the various special spring weekends in a few months.

Though this is Walker’s first book, she hopes it isn’t her last. Already, she is being encouraged by the Walla Walla Valley wine industry to consider doing a second book on the valley. She also would like to write a book on the valley’s rich agricultural history.

For those who prefer, ebook versions are available for Kindle, iBook and Nook.