A peek at the WSU Wine Science Center 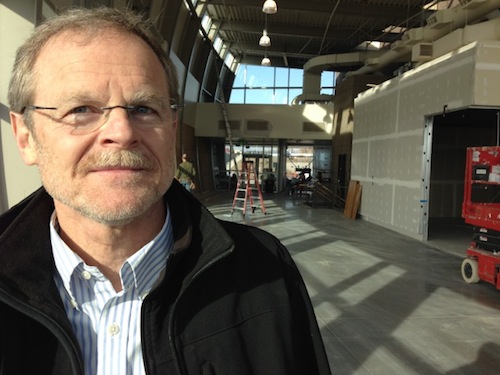 Thomas Henick-Kling is director of viticulture and enology for Washington State University. He stands in the atrium of the WSU Wine Science Center, which is under construction in Richland, the heart of Washington wine country. Construction will be largely completed by the end of December, and the first classes will be held there in August 2015. (Photo by Andy Perdue/Great Northwest Wine)

RICHLAND, Wash. – Washington State University’s Wine Science Center is largely completed, and the director of viticulture and enology is looking forward to moving in.

The Wine Science Center is a $24 million facility being built in the heart of Washington wine country, less than a mile from the Columbia River. Thomas Henick-Kling, who oversees the university’s winemaking and grape growing programs, is rubbing his hands together in anticipation.

Construction of the 40,000-square-foot facility will be largely completed this month, and Henick-Kling is looking forward to setting up laboratories and the facility’s working winery. He expects the first classes to take place in August, when fall semester starts. That’s also when the first grapes will arrive at the Wine Science Center’s crush pad.

The Wine Science Center is being built by the city of Richland on land owned by the Port of Benton. Fundraising for the facility was kicked off by the Washington State Wine Commission, when it pledged more than $7 million in 2011. Since then, the state has provided $5 million in funding and various entities – both businesses and individuals – have raised nearly all the money or in-kind donations necessary.

Henick-Kling looks forward to the Wine Science Center focusing on both education and research, and he anticipates strong collaboration with winemakers and grape growers from throughout Washington. He also envisions being able to collaborate on research projects with the University of California-Davis.

At 3 p.m. Thursday, Henick-Kling and members of his team will spotlight donors who are contributing to the nearby Albert Ravenholt Research and Teaching Vineyard. The Albert Victor Ravenholt Foundation recently donated $500,000 to the WSU viticulture and enology program. Ravenholt was a founding partner in venerable Sagemoor Vineyards, which is across the Columbia River from WSU Tri-Cities north of Pasco. Many of the cuttings for the Wine Science Center’s teaching vineyard came from Sagemoor, Henick-Kling said.

The public is invited to Thursday’s tour of the vineyard, which is at the corner of George Washington Way and Sprout Street behind the Wine Science Center. WSU Blended Learning wines, made by Henick-Kling’s students in collaboration with several nearby wineries, also will be available for purchase on Thursday afternoon.

Here are a few photos from inside and above the Wine Science Center, taken Tuesday by the staff of Great Northwest Wine.