Nomination deadline near for Washington Wine Hall of Fame 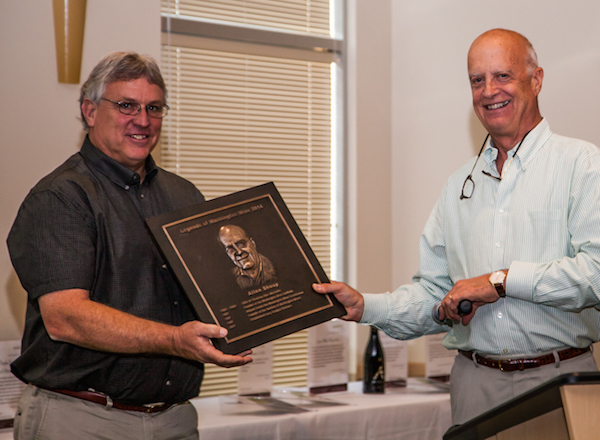 Roger Gamache, left, presents Allen Shoup with his plaque last summer during the 2014 induction ceremony into the Legends of Washington Wine Hall of Fame in Prosser. (Photo by Cherished Moments Photography)

PROSSER, Wash. — The  deadline to nominate someone for induction into the Legends of Washington Wine Hall of Fame will arrive Dec. 22.

The program honors individuals who have made a lasting impact of at least 25 years on the Washington wine industry, and a new Legend is inducted each year based on the nominations.

A Legend is defined as a winemaker, researcher, educator, philanthropist, journalist or other individual who has made significant and lasting contributions to the industry.

Each Legend receives a bronze plaque, which is mounted and displayed in the tasting room at the Walter Clore Wine and Culinary Center. The center, which opened earlier this year after a decade of fundraising, is open each day to visitors.

The 2015 inductee will be chosen by Jan. 9. Nomination materials can be found at www.theclorecenter.org under “Events.” Individuals nominated in 2014 are not eligible again until 2016.

Next year’s inductee is scheduled to be announced in early March, and induction will take place 6:30 p.m., Friday, Aug. 7 at the Clore Center. The celebration event will include a social hour on the patio and in the tasting room, followed by a three-course dinner. The program will include the induction, followed by a live auction. All proceeds benefit the Walter Clore Wine and Culinary Center.

Clore began his career in 1937 after studying vinifera grapes and their potential for growth in Washington soils. His research earned him official recognition from the state Legislature as the “Father of the Washington Wine Industry.”

Registration and sponsorship details are available at www.theclorecenter.org or by calling 509-786-1000.