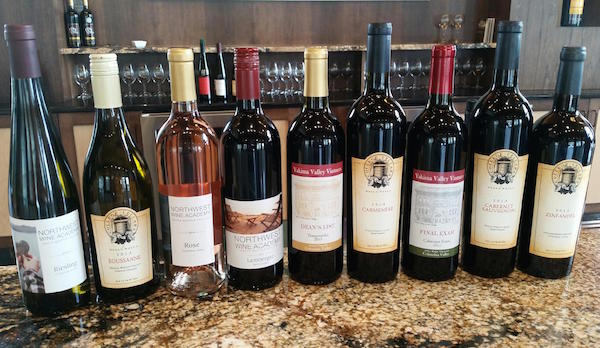 PROSSER, Wash. — Student-made wines move to the head of the class this month at the Walter Clore Wine and Culinary Center tasting room, and that would have made the historic Washington State University researcher proud.

“It’s our tradition in September,” said wine program manager April Reddout. “It’s student wine month, and when you tell people that, the look on their faces is one of suspicion and they might be tempted to turn around and walk out the door, but we explain to them and then it just takes that first splash of wine in their glass. Their eyes light up and say, ‘This is really good!”

The tasting room at the Walter Clore Center creates a different theme each month, typically spotlighting one of Washington state’s 13 American Viticultural Areas. “Back to School” wines means they are made by students in the enology and viticulture programs at South Seattle Community College, Walla Walla Community College, Washington State University and Yakima Valley Community College. These students are future winemakers, and they learn at the elbow of some skilled winemakers and grape growers.

Each day from 11 a.m. to 5 p.m., Clore Center visitors can taste the wines from the Northwest Wine Academy (SSCC), College Cellars (WWCC), Yakima Valley Vintners (YVCC) and WSU Blended Learning for a $5 tasting fee. The wines  are available for purchase by the glass and the bottle. Those funds not only support the college programs but also the Clore Center, a nonprofit organization created to showcase the Washington state wine industry, provide education and display the state’s agricultural diversity. 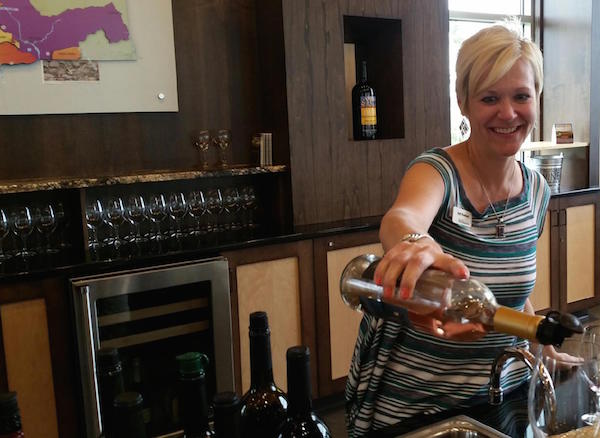 April Reddout, wine program manager of the Walter Clore Wine and Culinary Center in Prosser, Wash., pours a sample for a visitor. (Photo by Donna Tudor/courtesy of the Clore Center)

When guests find a wine they want to immediately sit down and enjoy in the Clore Center, they can purchase a glass. Chances are that student-made wine has won a medal in a West Coast wine competition.

“The No. 1 point is that people are very impressed with the high quality and budget-friendly combination these wines offer,” Reddout said. “So much of the time, these schools get grapes donated to them — and they don’t pass along that cost to the customer.”

It’s worth noting that the quality coming out of these programs means they earn year-round representation in the Walter Clore Center tasting room.

“College Cellars and Yakima Valley Vintners make it so easy to bring their wines in that we’ll sometimes have four to six different varieties or blends — even if it’s not September,” Reddout said. “We like to offer education to our customers and expose them to wines they don’t normally see, and these student-made wines are a great talking point at the tasting bar.” 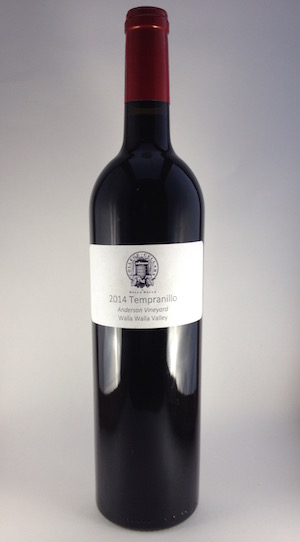 Reddout and her team point out the bond that some vineyard owners have with a particular college program.

“A lot of the growers in the area are very generous in donating high-quality fruit to these students so they can make a great bottle of wine,” Reddout said.

Last year, Phil Cline of Naches Heights Vineyard donated some Gewürztraminer to Yakima Valley Vintners. Those grapes went on to earn a double gold medal for Yakima Valley Vintners at the 2015 Seattle Wine Awards. Cline chuckles when he tells the story because the Guinevere Gewürz under his NHV brand received only a gold medal, which he chalks up to a last-minute acid adjustment he ordered.

“Scott’s been donating fruit for years, but he’s just happy to stay in the background,” Reddout said.

And there’s the Yakima Valley Vintners Full Circle Cabernet Sauvignon. The vineyard is owned by Doug Robert, a grad of the YVCC viticulture program who planted the site in 2009 and gave his alma mater a ton of Cab from his first commercial vintage.

“That’s the story behind the name — how it came full circle,” Reddout said. “There’s so much support among these growers.”

Another fascinating wine in the tasting room is the Zinfandel from Volcano Ridge Vineyard in the Columbia Gorge, a project spearheaded by Alan Busacca, a retired WSU geology professor.

“You can smell the terroir — the soil in the glass — along with the strawberry jam,” Reddout said. “It’s phenomenal and a great bottle of wine.”

It takes months to organize and orchestrate the lineup of wines to be featured each month at the Clore Center tasting room, and there’s also time spent educating staff. Reddout does the research and the outreach, then she shares the background of the wines with her team.

Among the easiest sells on a regular basis at the Clore tasting room are the WSU wines.

“We have a pretty exclusive corner on the market to sell them,” Reddout said. “It’s Cougar Country. And if their best friend is a Husky, they’ll often buy a bottle of WSU wine to give them and show them what WSU is doing and their school is not.”

Reddout joined the Walter Clore Center in March 2014, three months prior to the opening of the 15,000-square-foot facility.

“The months just fly by. It’s been a blur,” Reddout said. “It feels like it’s been just six months.”

This year has been a bit easier on Reddout because many of the wineries throughout the state are familiar with the retail process, which includes the Clore Center buying the wines at wholesale and selling them at a tasting center in the middle of wine country and less than a minute off Interstate 82.

“A lot of times the wineries said it sounded too good to be true, so it took a lot of time to explain it to them,” Reddout said. 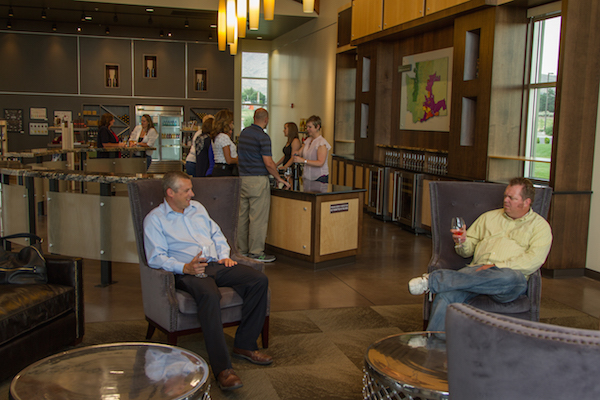 A group of visitors relaxes at the bar in the Walter Clore Wine and Culinary Center tasting room in Prosser, Wash. (Photo by PixelSoft Films/courtesy of the Clore Center)

There is a process, though, and the wines go through a tasting panel that includes some non-professionals.

“They represent customers,” Reddout said. “Not every wine that we sell is one that I’ve recommended, but the tasting panel has, so it’s not an April Reddout Palate Wine Shop. My tastes might not overlap with someone else’s, which allows me to be really honest with the guests.”

In September, the Back to School promotion dominates the Clore Center tasting room, but visitors can still taste other wines. On the shelves are several examples each of rosé, Merlot, Malbec, Cabernet Franc, Carménère, Pinot Noir and even a Souzão. 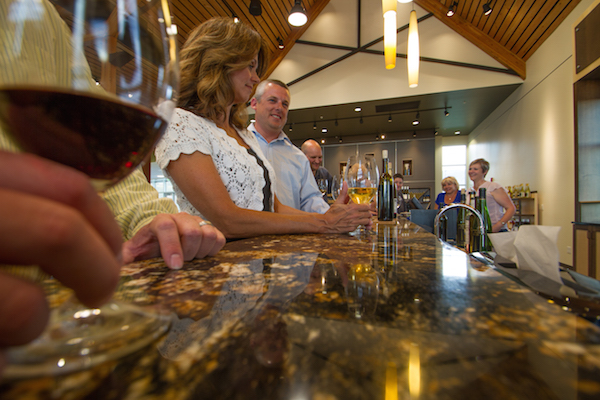 A group of visitors relaxes at the bar in the Walter Clore Wine and Culinary Center tasting room in Prosser, Wash. (Photo by Pixelsoft Films/courtesy of the Clore Center)

Next month, the focus in the Clore Center tasting room will be on wines of the Yakima Valley, but all four schools still will be represented. The Columbia Crest Walter Clore Private Reserve Red Wine also always is available, and Reddout makes sure there is at least one bottling of Lemberger on hand, a grape that makes delicious and affordable wine but is even less fashionable than Merlot became.

“My new quest is to debunk the whole Sideways effect,” Reddout said. “We always have a Lemberger on our shelf, which gives us an opportunity to provide some education about a fantastic grape.”

And for those who miss out on Back to School month at the Clore Center, each of the community colleges operate their own tasting rooms on their respective campuses. The WSU Blended Learning wines are available at the WSU Visitor’s Center in Pullman and at WSU Connections in Seattle.

The Clore Center is open daily from 11 a.m.-5 p.m. It regularly offers small plates of food for purchase, but the Fresh Fare menu is available Friday through Sunday from noon to 4 p.m.

Clore Center’s 2015 Back to School lineup