ALDERDALE, Wash. – A young Washington winery focused on producing great Cabernet Sauvignon from the Horse Heaven Hills is taking its brand to the national level.

Double Canyon is heading into a dozen new markets across the country, with General Manager Will Beightol leading the charge. The wine already has penetration in Western states, but this year the focus is to get Double Canyon’s Cabernet Sauvignon into such regions as Minneapolis, Chicago, Miami, New York, Boston and parts of Texas, among others.

Double Canyon is owned by Crimson Wine Group in California. That relationship will help Double Canyon become established nationally, thanks to the company’s sales force and distribution channels.

“It helps to have a lot of those relationships already in place,” Beightol told Great Northwest Wine. “We have people on the streets out there selling wines from our other wineries, and now they’re going to have a Double Canyon product to sell.”

Crimson Wine Group is well established in the Pacific Northwest with its ownership of Double Canyon in the Horse Heaven Hills and Archery Summit in Oregon’s Dundee Hills. Last week, it added venerable Seven Hills Winery in Walla Walla to its portfolio.

In addition, Crimson Wine Group opened the Great Estates Wine Room in December in Seattle’s Pioneer Square district, where it features the wines of Double Canyon and Archery Summit. Soon, Seven Hills will be added to that mix. The tasting room is open from 10 a.m. to 7 p.m. daily and serves tastes, as well as wine by the glass or bottle. It also offers small bites, as well as cheese plates.

The history of Double Canyon goes back barely a decade, when Crimson Wine Group purchased land from the Mercer family next to famed Champoux Vineyards in the Horse Heaven Hills town of Alderdale just north of the Columbia River. 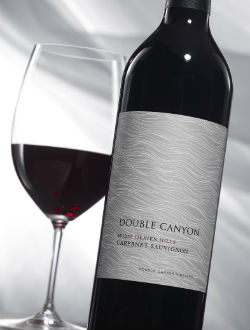 Beightol, who grew up in Alderdale, joined the team in 2006, and the vineyard was planted in 2007 and 2008. It is just more than 90 acres in size, with 65 percent planted to Cabernet Sauvignon, 15 percent to Syrah and the remainder to other Bordeaux varieties. Famed Horse Heaven Hills grape grower Paul Champoux served as a consultant for the vineyard planting.

The name comes from two canyons – deep ravines, really – on the property.

“When you talk to Mercer family members, that’s what they referred to it as,” Beightol said.

The first vintage of Double Canyon Cabernet Sauvignon arrived with the cool 2010 vintage – a mere 250 cases. In 2011, Beightol got no crop off Double Canyon because of a killer freeze in November 2010 that devastated that area of Washington wine country. So he went next door to talk to the owners of highly regarded Phinny Hill Vineyard about acquiring grapes.

“It’s a lot easier conversation when you’re just asking Mom and Dad if you can borrow some fruit,” Beightol said with a laugh. His parents own Phinny Hill, where he grew up.

Its 2013 Cabernet Sauvignon is a $25 blend of grapes from Double Canyon, Champoux Vineyards and Phinny Hill. This 4,500-case Cab is the wine going into national distribution. The 2014 version will expand to more than 10,000 cases.

“You need a certain amount of wine to spread it across the United States,” Beightol said.

In addition, Double Canyon has released a reserve-level 2012 Estate Vineyard Cabernet Sauvignon that retails for $65.

While Double Canyon’s focus will remain on crafting great Cabernet Sauvignon in the Horse Heaven Hills, Beightol said the winery team will always be on the lookout for small lots of other wines that could be made available to wine club members and in the tasting room.

Beightol grew up next to what now is Double Canyon. He likes to tell the story of how he, his parents and his brother made up more than 10 percent of the population of Alderdale. He went to school in Prosser to the north, then to Washington State University in Pullman after high school.

While he had no intention of getting into agriculture after college, Beightol ended up working for Hogue Ranches upon graduation and was instrumental in establishing Zephyr Ridge Vineyard in the Horse Heaven Hills and working with such Washington wine luminaries as Wade Wolfe, David Forsyth, Mike Hogue and Jarrod Boyle.

In the meantime, his parents planted Phinny Hill across the road from Double Canyon, and their grapes have become some of the most-sought reds in the region. In fact, that corner of Washington wine country is pretty special, as shown by such vineyards as Champoux, Phinny Hill, Coyote Canyon, Discovery, Alder Ridge and Andrews Horse Heaven Ranch, with Zephyr Ridge and Destiny Ridge not far up the Columbia River.

“It is the sweet spot for Cabernet Sauvignon,” Beightol said. “I think you see that with the old guard and the up-and-coming wineries.”

Certainly with the new push for Double Canyon to reach far beyond the Pacific Northwest, more wine consumers are likely to discover that, too.