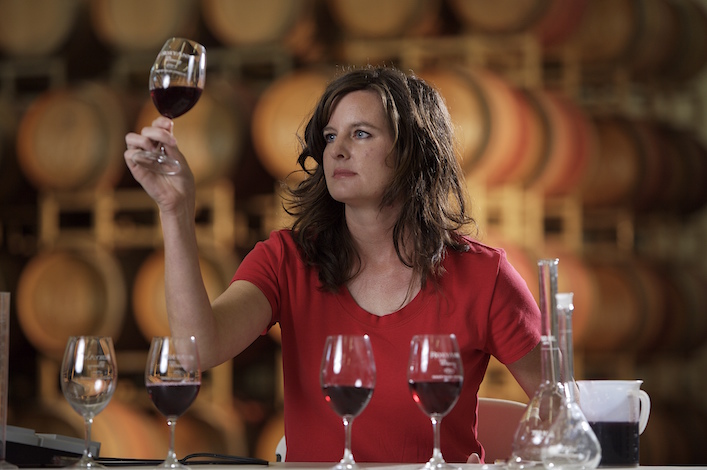 RUCH, Ore. – Based her recent string of successes, it would almost be a crime for Rachael Martin to do anything other than make Tempranillo in Southern Oregon.

Her odyssey began in 2001 with some fatherly advice, which sparked the transformation of a basil farm into wine grapes and the creation of Red Lily Vineyards near the historic town of Jacksonville.

“I have a degree in something totally unrelated – criminal law – so that’s a perfect transition into winemaking, right?” she said.

“It’s been fun,” she said. “I’m so in love with Tempranillo and all the ways it can express itself.”

Recently, we sat down to chat with Martin at her tasting room along the Applegate River in the Rogue Valley. Here’s the interview. 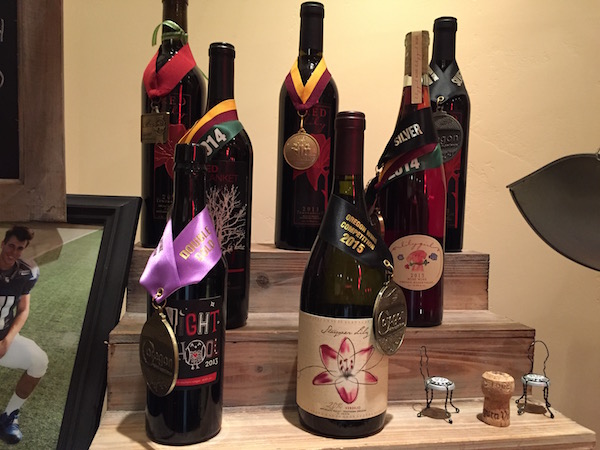 “We thought, ‘If we’re going to go in for this, we might as well go all in with a variety we love. And if the whole business falls apart, we’ll still have wine that we love to drink,” she said.

Their 22 acres of plantings span two vineyards seven miles apart in the Applegate Valley and include Graciano, Grenache and Verdejo — grapes all native to the Iberian Peninsula. The Martins began their courtship in Reno a few years after she graduated from the University of Nevada. However, that passion for Tempranillo took root in Southern Oregon.

“Les and I have always had a real appreciation for wine, and about 15 years ago we fell in love with some of those 100 percent Tempranillos coming from Spain, but I grew up in Medford and my family all lives here,” she said. “Les really fell in love with the area. I never had to do the ‘Let’s move to Southern Oregon’ sales pitch, so to speak,” she chuckled.

“We started looking for property, and we found some land in the Applegate a few miles from here — an organic basil farm,” she continued. “We took my very Irish dad out there to look at it with us and I said, ‘Gosh, well, maybe I could grow basil.’ And he looked at me and said, ‘Why would you grow basil. Why wouldn’t you grow wine grapes?’

“That story sounds silly, but it was as simple as that.” 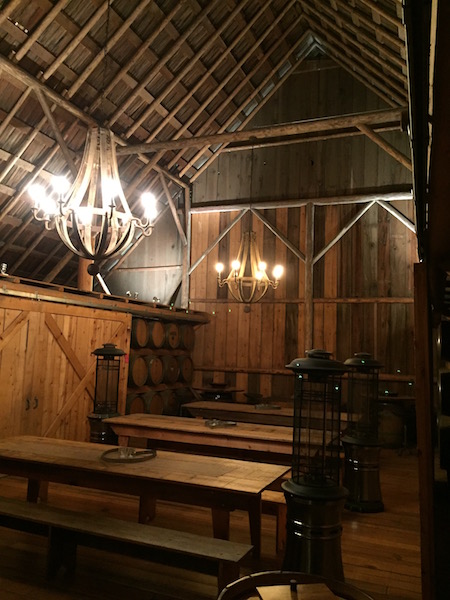 The Martin family features the 80-year-old barn that came with the 250-acre cattle ranch they bought in 2007 to serve as the home of Red Lily Vineyards near Jacksonville, Ore. (Photo by Eric Degerman/Great Northwest Wine)

It wasn’t until 2007 when the Martins really dug deep, buying a 250-acre cattle ranch that came with an 80-year-old barn. A small but sturdy concrete bridge over the Applegate River leads to the winery, tasting room, vineyard and a special events hall that capitalizes on that steeply roofed barn.

“It was such an incredible opportunity for grape growing because of the hilly vineyard sites that were possible and also from a tasting room sense by being near the water,” she said. “We thought it would have a lot of appeal for people coming out to wine taste.”

Ironically, the building closest to the Applegate River serves as home to their conference room, offices, barrel room and production facility. Their home looks out over the grounds and the river.

“I always laugh that it’s good to be stuck on this side of the river with all the wine when the bridge does go underwater,” she chuckled. 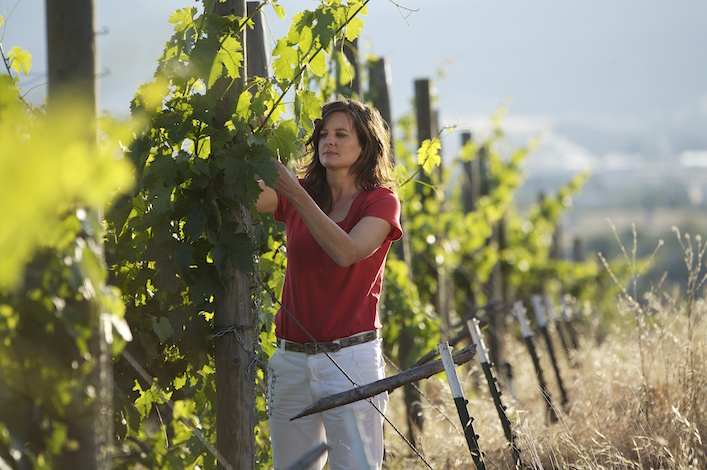 She made her double gold 2012 Temp with Duero clone and clone 1 fruit, both of which have helped Abacela make headlines internationally and allowed other Southern Oregon producers to follow the lead of Earl Jones. At the San Francisco Chronicle judging, six entries earned a double gold in the $25 and over class, half of them from the Pacific Northwest.

“For winemakers, the Chronicle has a lot of clout, and It feels good for the area because there were other producers that also got really high scores for their Tempranillos,” she said. “I think for Southern Oregon that momentum is really exciting to be a part of.”

“We’ve been really lucky in Southern Oregon weather-wise — I should knock on wood about this — but 2012, 2013, 2014 and this year (2015) we’ve had perfect growing conditions for Tempranillo, which is an early ripener, so you can really get it exactly how you want it,” she said. “You are not pressured by any kind of weather.”

Martin, 44, said her sites tend to produce smaller berries, which helps her craft Tempranillos with depth, complexity and balance.

“Tempranillo can be a very big-berried grape,” she said. “I feel like the ratio of skin to juice has been really advantageous to us.”

Martin began as apprentice to the late Sarah Powell 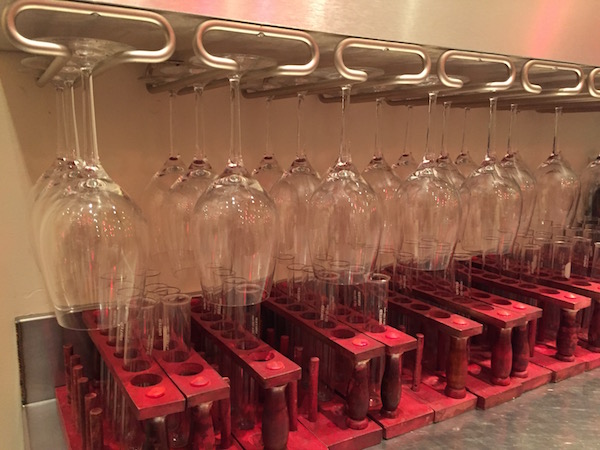 The wines emerging from Martin’s well-appointed and meticulous lab got their start with her apprenticeship for the late Sarah Powell. The respected Southern Oregon winemaker graduated from the University of California-Davis and worked at Hogue Cellars in Washington’s Columbia Valley before taking over first at Foris Vineyards near the Oregon Caves and later RoxyAnn Winery in Medford before dying of cancer in 2004.

“You put on your boots, worked hard and learned on the job,” Martin said. “I hadn’t had chemistry since I was 15, and I didn’t particularly love it in high school, but I’ve really worked hard at that piece to be able to not only bring the artistic side but also the chemistry and the science.”

And while many wineries struggle to develop a name for their brand, the concept came rather naturally to the Martins.

“A night of lot of wine drinking,” Martin said with a chuckle. “Bolander’s lily is a small red lily that grows in this area, and with our daughter being named Lily, it has a dual meaning to us.”

Some of Lily’s artwork appears on labels and throughout the tasting room. Their son, Riley, a junior who plays basketball for state-ranked South Medford High School, also is represented.

“Riley’s got his own wine label which depicts his basketball court, his hoop by the barn and his jersey number,” Mom said. 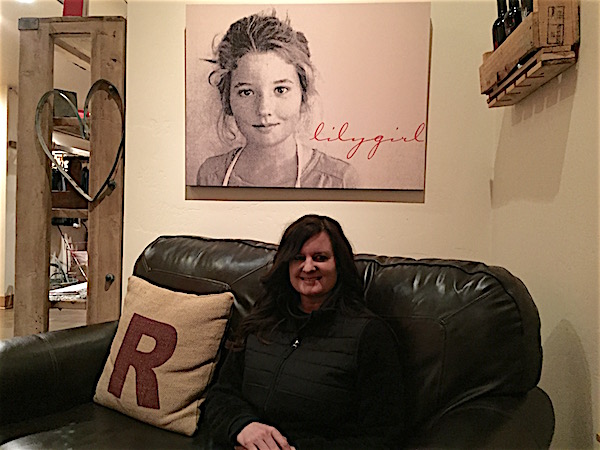 Red Lily Vineyards’ spot along the banks of the Applegate River offers a bucolic setting for tourists who meander along the peaceful country roads of the Applegate Valley beyond Jacksonville. Upon arrival to the Martins’ winery, guests likely will come across an event on the lawn near the river, under the huge barn or in the tasting room that’s wholesome, fun and without pretense. There could also be a concert accompanied by food trucks and other local vendors.

“We really wanted to create place that was approachable,” she said. “People with no wine knowledge at all can come come here, taste the wines and be educated. They wouldn’t feel as if they couldn’t ask questions.

“At the end of the day, if they felt like they still weren’t fans of wine, they could buy a cold beer and we’d be happy to serve it to them,” she added. “That’s the philosophy here.”

And to think that if not for an Irishman, the Martins might have started off a path of basil rather than award-winning Tempranillo.

“I would have tried to make the best pesto I could have,” she chuckled.