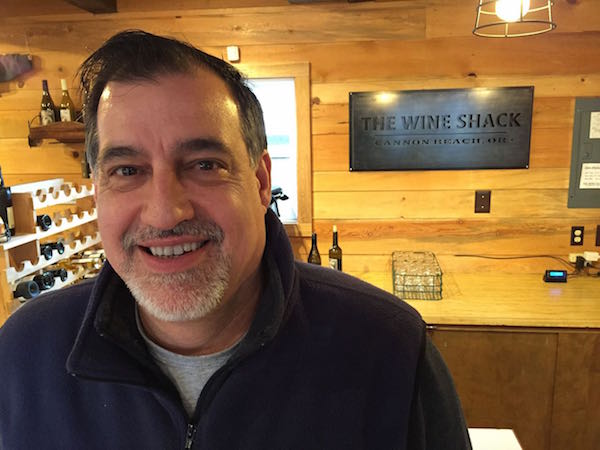 Steven Sinkler grew up in the Midwest but moved to the Oregon coast four years ago to buy The Wine Shack in Cannon Beach. (Photo by Andy Perdue/Great Northwest Wine)

And nothing goes better with seafood than a great bottle of wine. Steven Sinkler, owner of The Wine Shack in this coastal community, carries hundreds of wines in his shop just off the main drag through town and is expanding all the time.

We recently caught up with Sinkler while we were on the coast and chatted with him about The Wine Shack, Cannon Beach and Northwest wine. 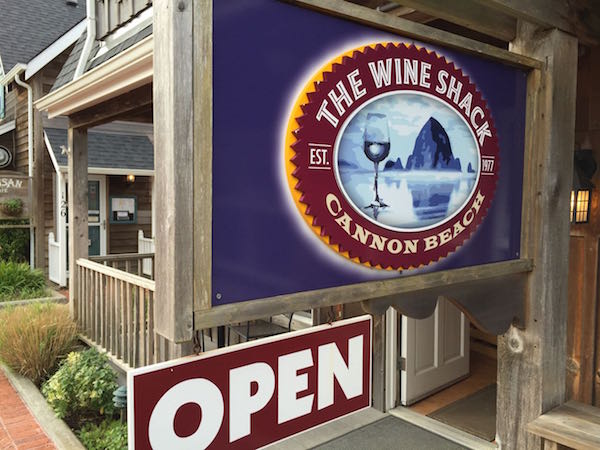 The Wine Shack has been a part of Cannon Beach since the 1970s, making it one of the oldest wine shops on the Oregon coast. (Photo by Andy Perdue/Great Northwest Wine)

Sinkler grew up in Iowa then moved to Georgia. He and his wife discovered the Oregon coast and often would make it their vacation destination. When his wife had the opportunity to move to Oregon for her job with the Red Cross, they began to scout out where to locate and discovered The Wine Shack was for sale.

It didn’t take long for them to decide on Cannon Beach over Portland (about two hours to the east) and to purchase The Wine Shack while they were at it.

The Wine Shack is one of the oldest wine shops on the Oregon coast – and perhaps in Oregon. It opened for business in 1977 and continues to draw rave reviews from its customers.

When Sinkler took over the shop, the emphasis was European selections mixed in with Northwest wines. He quickly decided to change that focus to primarily wines from Oregon and Washington, particularly Pinot Noir. His customers appreciate it.

“The mix is about 90 percent tourist and 10 percent local,” he said. “For a lot of our customers, it’s the first time they’ve been into our store. It really opens their eyes when they see the selections that we have for such a small wine store. We try and blow them away with the selections from Walla Walla and the Willamette Valley.”

Sinkler and his staff make decisions about what wines to carry through a number of channels. They participate in trade tastings, they bring in regional distributors for tastings, and Sinkler judges a fair number of competitions around the Northwest, including Savor Northwest, the Great Northwest Invitational Wine Competition and others. He keeps a close eye on regional judgings to get leads on what the next great bottle of wine is.

In fact, his wine of the year in 2015 was Reustle-Prayer Rock Vineyards‘ Syrah. The 2012 was the No. 1 Syrah in the world at the Six Nations Wine Challenge in Australia, and he thinks the 2013 is even better.

“We carry a lot of Reustle and a lot of other fantastic wines from the Rogue and Umpqua,” he said. 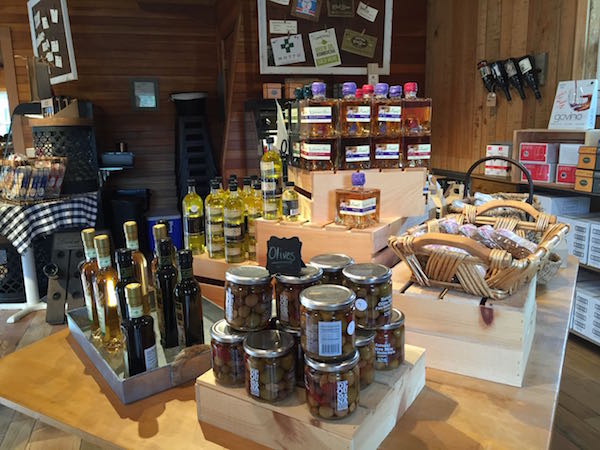 In the past year, Sinkler has put The Wine Shack through a big remodel. Not only has the store been completely reorganized to make it feel more open and airy, but Sinkler also acquired the business next door, took down a wall and added Provisions 124, a gourmet food market.

Inside, Sinkler provides cheeses, meats, fresh bread, crackers, mustards and other gourmet food products. The emphasis is on local, right down to olive oil that comes from the Oregon Olive Mill in the Dundee Hills. He also carries Joe’s Bigfoot Barbecue Sauce, a business owned and operated by one of his employees.

“What we’re trying to do with that space is offer local foods, locally produced salamis and crackers and cheeses,” Sinkler said. “It’s the same concept that we’re following on The Wine Shack side: locally driven offerings.”

Sinkler said it’s important for visitors coming from Texas or the East Coast to show up and find regional products, rather than something they can find back home. Provisions has the feel of the grocery side of the Red Hills Market in Dundee and just a little feel of the famous Oakville Grocery in Napa Valley.

“They’re looking for something that’s locally produced and delicious at the same time,” he said. “That’s what we’re trying to do here.”

Provisions has the added benefit of facing Hemlock, which is the main street through tourist-heavy downtown Cannon Beach, and that’s important for luring in customers.

When visitors do pick up a bottle of wine and fun things to eat, they can head to the beach without concern, as Cannon Beach has no open-container restrictions.

“If they’re having their bonfire, they don’t have to worry about being busted for a bottle of wine or bottle of beer,” he said.

Also in the store is Puffin Wines, a brand Sinkler owns. The 600-case winery includes five wines: Pinot Noir, Pinot Gris, rosé, Chardonnay and Cabernet Sauvignon. The wines are available primarily at The Wine Shack and online, but Sinkler also has distribution up and down the coast and soon will be statewide.

When to come to Cannon Beach 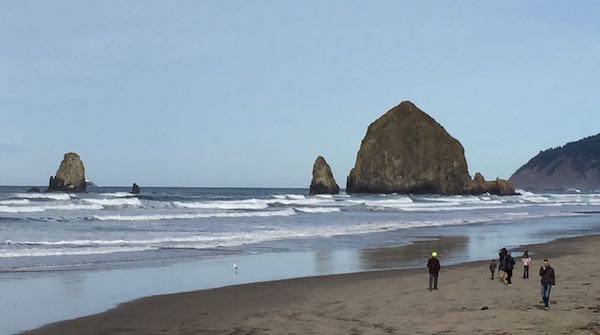 Cannon Beach , Ore., is one of the iconic destinations in the Pacific Northwest and is home to The Wine Shack, a great downtown wine shop. (Photo by Andy Perdue/Great Northwest Wine)

Cannon Beach is, first and foremost, a tourist town. That is where nearly all of its revenue is generated. Sinkler said high season is July through September, and he sells most of his wine during the summer.

“Those three months are really fantastic,” he said. “The town is busy and just has a great vibe.”

But he pointed out that there are other times when the community isn’t quite so busy.

For example, Sinkler said October’s weather can be fantastic and Cannon Beach is much quieter.

“The room rates are still expensive, but there are no crowds and the weather’s still beautiful,” he said.

He also thinks January is an overlooked time. Room rates, he said, are about half of what they are during high season, and visitors pretty much have the town to themselves.

But there is the weather.

“The downside is the weather is a little bit sketchy,” he said. “But if you like storms and you like watching the waves crash, it’s a fantastic time.”