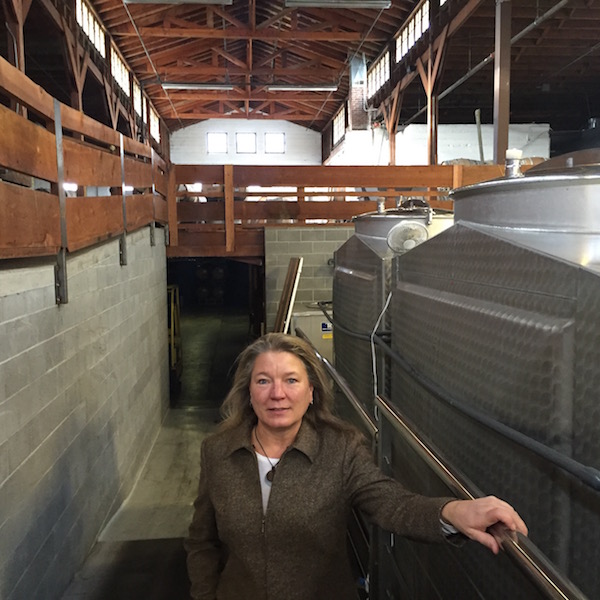 MEDFORD, Ore. – There are a number of examples throughout Oregon of how the wine industry has helped revitalize business districts in Carlton, McMinnville and Portland.

Linda Donovan might be doing the heaviest lifting of anyone, using her award-winning Pallet Wine Co. inside the historic Cooley-Neff Building to help rejuvenate downtown Medford.

“It’s not the best tourist destination but with Lithia (Motors) is doing and all the improvements going on, it feels like the Pearl District (in Portland) to me,” Donovan said. “I’ve been here for seven years and seen so much improvement. We’re also centrally located. It’s easy to get to off of I-5.”

Few wine tourist realize it, but Donovan is arguably the most prolific winemaker in Southern Oregon. She and her team are responsible for more than 25 brands. In 2015, she crushed the equivalent of 32,000 cases. And she will bottle more than 42,000 cases in the Liberty Park District for her myriad customers.

“I have clients who do one or two barrels of wine, and I have one client who does 5,000 cases of wine,” Donovan said.

We recently visited with Donovan, who gave us on a tour Pallet Wine Co., and her future tasting gallery.

UC-Davis grad lands in Ashland in 2000 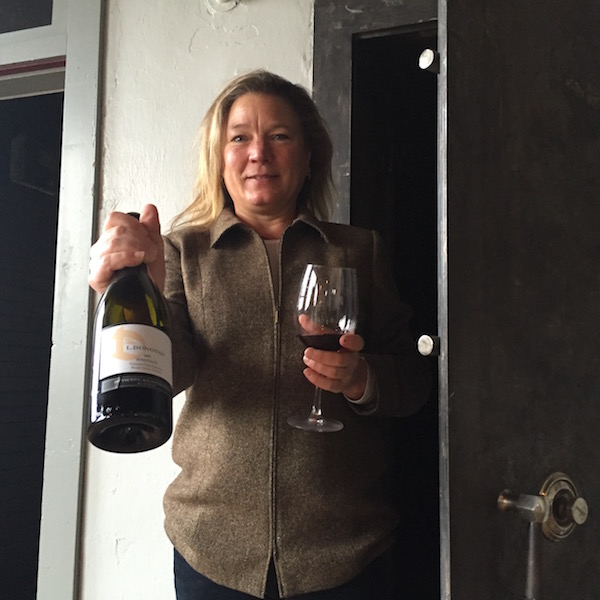 It’s been a rather remarkable ride for Donovan, a University of California-Davis enology grad, whose résumé includes Beaulieu, Robert Mondavi and Schramsberg. In 2000, she moved to Ashland from California and planted a 15-acre vineyard at Valley View Orchard for her sister.

“I managed the orchard for several years, but I missed making wine,” she said.

She helped Agate Ridge and Cowhorn get their start in Southern Oregon, which led to more consulting work.

“That’s about when I decided to start doing something on my own,” Donovan said.

Winery clients from Texas, Daniel Sullivan and his wife, Olivia, helped provide the spark of capital in 2008 and remain her partner in Pallet. She also gathered assistance from the Southern Oregon Regional Economic Development Inc., and Business Oregon, a state agency.

“We had several investors, most of whom we’ve bought out,” she said.

Her roots, however, are in Sonoma with Pinot Noir.

“I make all of my wines in a Pinot Noir style – indigenous yeast and bacteria, gentle punchdowns,” she said. “I’m not looking for something that doesn’t come naturally in a wine. No enzymes or over-manipulations.” 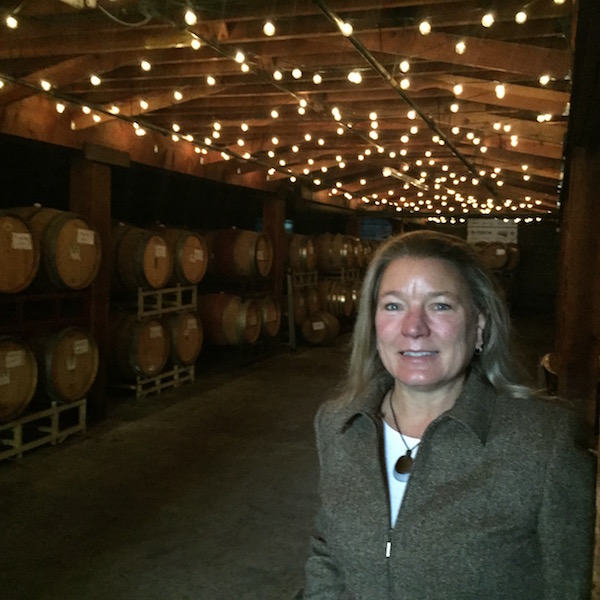 Linda Donovan crushed the equivalent of 32,000 cases of wine from the 2015 vintage at Pallet Wine Co., in Medford, Ore., but she will bottle about 45,000 cases for her custom-crush clients throughout the state. (Photo by Eric Degerman/Great Northwest Wine)

Bats fluttering inside made the dilapidated building on corner of Third and Fir reminiscent of 1313 Mockingbird Lane – not a winemaker’s dream.

“Every window was broken. Everything was boarded up. The plumbing and the electricity hadn’t been used for years and years and years, and it was all out of code,” Donovan said. “There were four layers of flooring, including carpet underneath plywood, but we found our beautiful floor.”

The next year, by May 2009, Donovan was ready to start making wine at Pallet.

“We did about a 150 tons, and we started going from there,” she said. “In 2011, we became Oregon’s 18th-largest winery based on production. That kind of proved that the engine could go, and we’ve been going strong ever since.”

Thanks to the acquisition of the adjacent building in 2015, Donovan pulled in 550 tons. She estimates the crushing capacity of the entire vinification facility now could stretch to 750 tons.

“We do all of our own analysis in-house, aside from TCA testing for the environment,” she said. “And I test for that every six months. Fortunately, this was built in 1924 – before a lot of the preservatives starting going into wood.” 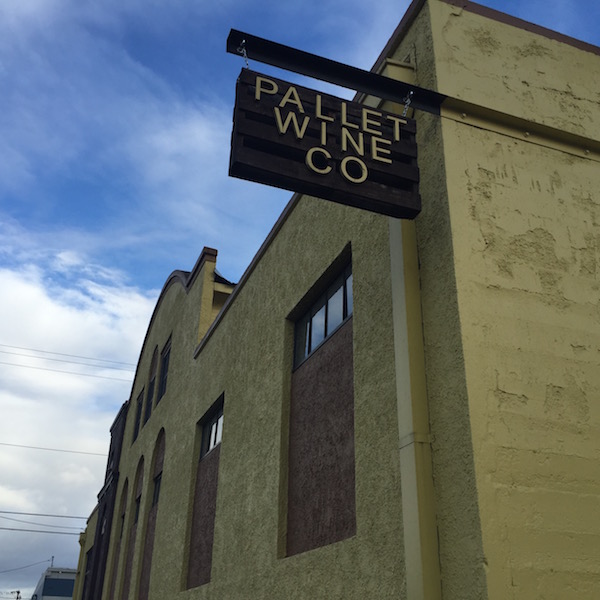 Pallet Wine Co. is a custom-crush facility created in 2009 in downtown Medford, Ore., but owner/winemaker Linda Donovan plans to open a tasting room next door this year for her own brand and 20 clients. (Photo by Eric Degerman/Great Northwest Wine)

Work on her eponymous brand – L Donovan Wines – is just a thimbleful for Pallet at 600 cases. However, it will get a share of the spotlight inside the newly added building next door, which will feature the tasting room and lounge for Donovan and her clients.

“We’re going to have 20 brands here, and some of them have as many as 10 different varietals,” she said. “Grizzly Peak does Tempranillo four ways.”

That building was established in 1942, so there are none of the National Historic Register restrictions she faced with Pallet. If all goes well, she will open the tasting room in April.

“I have so many clients who don’t have tasting rooms and don’t have distribution in this area,” Donovan said. “This will be a place where you can come and try wines from brands you’ve never heard of.

“It will just further the education of the people here about what we’re doing because the wine industry is booming right now in Southern Oregon,” she continued. “It’s only going to help get my clients recognized for some great wines that they don’t submit to judges and they don’t market and promote. I think it’s going to help my clients sell more wine – which is going to entice them to produce more wine, which is going to be just a big, big happy win-win.”

Her tasting room manager also will be able to seat patrons in a separate lounge.

“It will be a quiet place to get away from the crowds, I’m hoping,” Donovan said with a smile. “My big long-term goal is to have a rooftop bar here as the positive growth of Medford moves this way – which it is. It will have that urban feel I love. The tracks are right here behind us, so trains are going by all the time.” 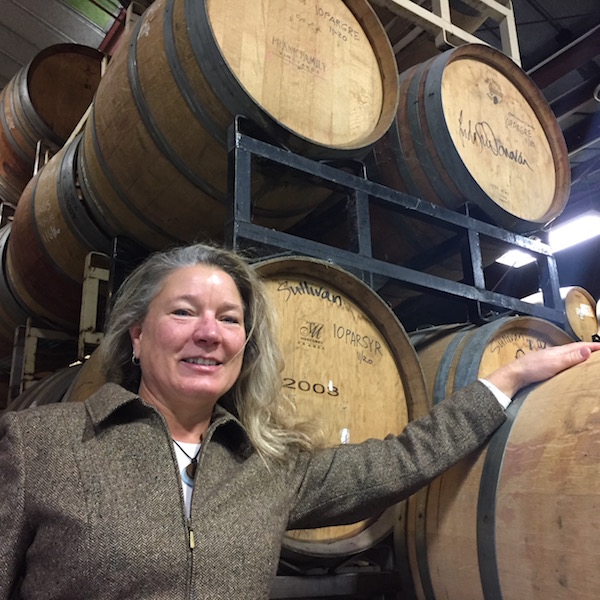 Linda Donovan has been making wine in Oregon since 2000, and she launched Pallet Wine Co., in downtown Medford in 2009. (Photo by Eric Degerman/Great Northwest Wine)

Donovan has watched and helped elevate the quality of Southern Oregon wines since she arrived 16 years ago to work for her sister.

“I would go back to Napa almost every month just to hang out with friends and drink good wine,” Donovan said.

Now, she’s working with as many as 36 grape varieties, including Pinot Noir and Pinotage.

“A real standout year after year is Merlot,” Donovan said. “Tempranillo does really well here, too, and Chardonnay, I think is a really good varietal for people to plant and make.”

Now, Pallet and Donovan’s peers are doing their part to help the Medford Urban Renewal Agency. It collaborated with Lithia Motors to establish The Commons, a building that earned a LEED award and serves as the national motor company’s headquarters.

Pallet Wine Co. is within a tee shot of The Commons. In the other direction, the Medford Gospel Mission and Goodwill store are a little more than a block away.

“I didn’t choose Medford. This building chose me,” Donovan said. “When I saw this building, it just hit me. Even with the state that the building was in, I saw its potential.”

Her location also offers convenience for wine tourists driving on Interstate 5 and truck drivers who bring her bins of grapes.

“With the fruit coming from all over Southern Oregon, it’s an easy place to get to,” she said. “I never thought we’d fill this building up. In the beginning, I was looking to lease out space to other businesses, but in two years, we outgrew it.”

With a measure of confidence and sense of pride, Donovan walks the mile from her home to Pallet Wine Co. Her hobbies are nearby and wholesome,  a round of golf or a hike with Finnigan, her friendly and faithful yellow Lab.

“I love what I do so it doesn’t feel like I need to get away from it,” Donovan said. “I can’t wait to get here in the morning.”