The 2016 vintage in Pacific Northwest vineyards has simmered down a touch in the past few weeks, but it’s still tracking on the heels of the historically hot 2015 growing season.

“Well, here we are in July, and it feels and looks like April!” Greg Jones, the wine industry’s leader in climate research, wrote in his latest weather update and forecast. “The cool-down in the middle of June is similar to what we are seeing right now over the western U.S., a rare low pressure area and trough bringing unseasonably cool temperatures and relatively rare rain for this period of the year.”

What this recent cool weather has done is dropped the growing-degree day totals from its record-setting territory.

“While GDD accumulations are still running roughly 15-25 days ahead of the long-term average, the cool-down through the middle of June brought 2016 down to similar values seen the last two warm years,” Jones wrote late Friday in preparation for the 11th International Terroir Congress he is leading this week in McMinnville, Ore. 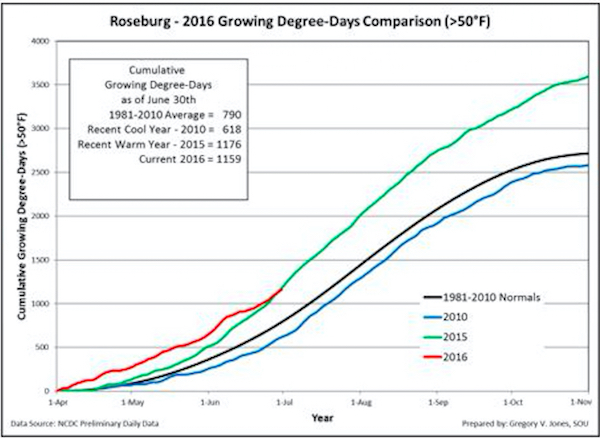 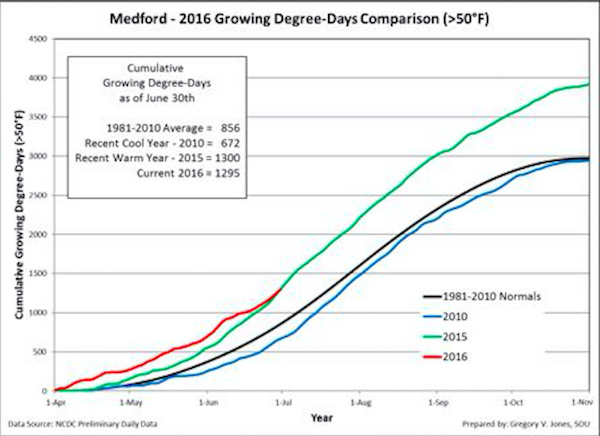 For example, the Southern Oregon University professor’s weather station in the Pinot Noir producing city of McMinnville stood at 907 GDD on June 30, just a few ticks ahead of the pace of 898 from the record 2015 vintage.

In the Walla Walla Valley, Jones’ station checked in with 1,163 GDD. Last year at the same date, the Milton-Freewater device stood at 1,381.

Washington State University’s AgWeatherNet charts growing degree days throughout the Evergreen State as well as parts of Oregon. Through June 30, there were 1,419 growing degrees days recorded at the Wahluke Slope station. A year ago, it charted 1,556 GDD.

The Pullman school’s station in Woodinville stood at 723 GDD, compared with 781 GDD in 2015. In the Columbia Gorge, Oregon’s Hood River County station already notched 950 GDD. A year ago, it stood at 1,001.

A look at the sea surface temperatures across Pacific Ocean would seem to indicate the transition from El Nino to La Nina is under way.

“My hunch is that the interesting June and now July trough conditions and slightly cooler air flow are a result of this shifting SST and the resulting circulation adjustments over the North Pacific,” Jones wrote. “Long-range forecasts are typically driven by conditions in the North Pacific and the state of El Niño in the tropics. If we continue to see a shift to cooler waters in the North Pacific AND the tropics continue to transition to La Niña, the western U.S. will likely shift into a cooler regime, especially into the fall and winter.”

Jones, however, points out that June came in as warmer than normal –  generally 2-6° Fahrenheit – for most of the West Coast with precipitation amounts mixed. The U.S. seasonal drought outlook forecasts that drought development is likely into the Pacific Northwest.

“Prediction models are in agreement that La Niña development is extremely likely by fall,” Jones wrote. “If the transition into La Niña conditions by fall materializes, the western U.S. would likely experience a colder and snowier winter.”

Despite the cool stretch in the past few days, the forecast is for the rest of the 2016 to return to higher-than-normal temperatures while much of the interior of the Pacific Northwest also is projected to be drier than normal, Jones wrote.

6-10 day: The short-term forecast is being driven by a rare break from heat in the month of July. A trough of low pressure that looks more like an April or May event will allow onshore flow and one or two frontal passages out of the Gulf of Alaska. The result is that temperatures during this period are forecast to be cooler than normal across the Pacific Northwest.

8-14 day: Similar to the 6-10 day forecast with the overall pattern driven by the lingering cool down in the western United States and much warmer than average conditions throughout the vast majority of the rest of the country. Again this is very unusual temperature pattern for July.

30 day: Once the unusual short-term cool-down ends mid-month, the forecast through the rest of the month of July calls for warmer-than-average conditions through the western U.S.

90 day: The July-August-September forecast continues the 30-day July forecast as given above. The majority of the continental United States has elevated chances of well above average summer temperatures, according to the latest outlook from National Oceanic and Atmospheric Administration’s Climate Prediction Center.