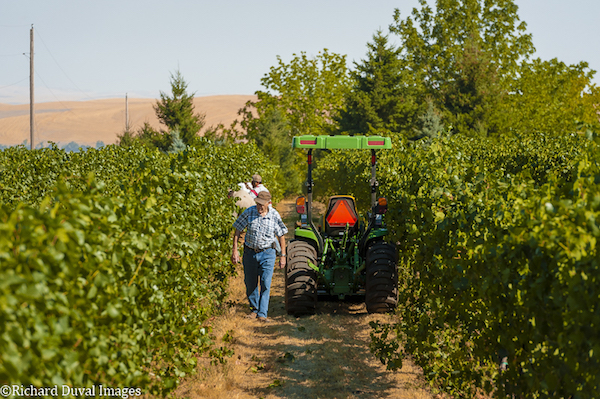 WALLA WALLA, Wash. – It’s fresh and sparkling in your glass, perhaps with flavors of peach, baked apple, honey and nougat. It’s a little richer in flavor than most sparkling wines, with just a hint of color. You’ve popped the cork, and most likely the bottle is from Champagne itself. The label says Blanc de Noirs.

It’s a rare bird, this blanc de noirs. A white wine made from red grapes, hence its name: “white from black.” It’s effervescent, often with a faint coppery tinge or a pale salmon hue enveloping the bubbles. Although widely appreciated in France, where a Champagne can be made only from Chardonnay, Pinot Noir, Pinot Meunier or a blend of these grapes, blanc de noirs is not often made in the United States.

The process of making this wine is unlike those for making still whites and reds, and it goes back a long way. Sparkling wines were known in England as early as 1660, and although Dom Perignon is often called the inventor of Champagne, this is considered to be a marketing tale created by Moët et Chandon when it acquired the right to use Dom Perignon’s name in 1927. The allegedly blind monk is, however, credited with inventing the idea of making white wines from red grapes.

Northwest winemakers that have taken the plunge into the alchemy of turning black into white, include Washington wineries Michelle Sparkling Wines in Paterson and Treveri Cellars in Wapato, as well as Oregon’s Edgefield Winery in Troutdale, Lundeen in McMinnville, King Estate in Eugene and Analemma in Mosier. 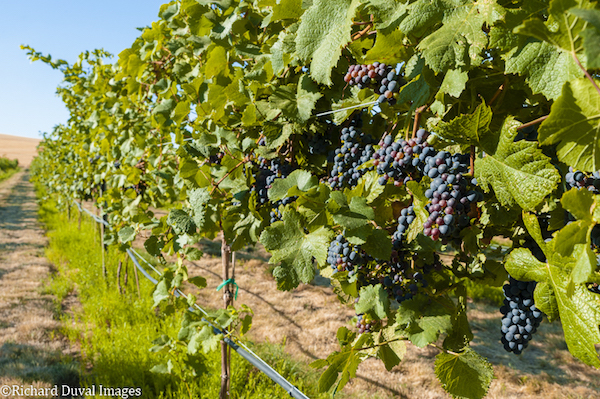 Pinot Noir is ready to be harvested at Breezy Slope Vineyard on the Oregon side of the Walla Walla Valley. The grapes are destined for a blanc de noirs sparkling wine produced by College Cellars. (Photo by Richard Duval/Great Northwest Wine)

This year, Walla Walla Community College aims to break ground and has begun production of its first blanc de noirs, made in the traditional méthode champénoise. On a warm and sunny August morning, a half-ton of Pinot Noir grapes on the tart side at a brisk 21 Brix, was hand-harvested at Breezy Slope Vineyard near Milton-Freewater.

Grower Jack DeWitt planted the Pinot Noir in 2009, growing on a gentle slope at 1,750 feet, and the grapes enjoy the cooler temperatures at that elevation. Pinot Noir is a cool-climate grape, which is why so much is grown in Western Oregon’s Willamette Valley – and so little in the hotter vineyards of Eastern Washington’s Columbia Valley.

Once harvested, the grapes were hastily driven to Walla Walla Community College’s College Cellars. There, a handful of students watched intently as the purple bunches were pressed ever so gently, so as to extract as little color as possible from the skins.

The excitement on the crush pad was palpable. The first crush of the season is always a thrill, and besides, “This is a fun opportunity for us and for our students to learn more about the special quality that Pinot Noir lends to a sparkling wine,” said enology instructor Sabrina Lueck. “We’re especially excited about this specific wine because it is such a unique experience for our students. There is little Pinot Noir grown here and little sparkling wine produced in the Walla Walla Valley.”

Since the process of making the blanc de noirs takes about a year and a half, the students who are entering the program this fall will disgorge this wine the week before they graduate in 2018.

“This is our way of toasting our graduates,” Lueck said.

If you are fortunate enough to acquire a bottle, serve with charcuterie, as well as all sorts of patés and terrines, game birds or wild mushrooms in a cream sauce or a light wine sauce. The special power of blanc de noirs is that it combines delicacy with sturdiness, and is able to stand up to food as easily as it lends itself to enjoyment on its own. 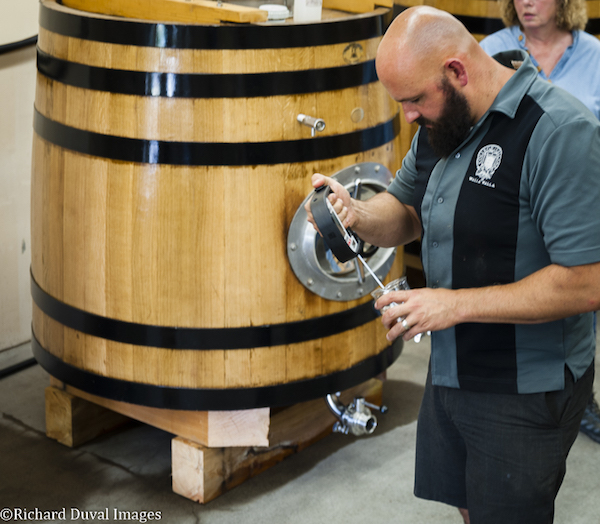 In méthode champenoise, after a gentle pressing of the whole clusters, the wine is fermented to dryness. The goal of this first fermentation is to produce a “base wine” with as few primary fruit flavors as possible.

Once dry, the base wine is inoculated with a mixture of a second yeast culture and sugar to feed the yeast. It’s then bottled immediately, closed with a crown cap much like the cap on an old-fashioned bottle of soda. It’s that second fermentation in the bottle that produces the bubbles when the yeast cells release carbon dioxide as they metabolize the sugar.

The wine is then aged in the bottle for about 18 months with the remains of the spent yeast, known as the lees. It is the lees that imparts much of the flavor of sparkling wines. To prevent the lees from sticking to the sides of the bottles they are placed, angled with the neck downwards, on a riddling rack, where they are turned frequently to allow the lees to settle into the neck of the bottle. Once all the lees is settled against the crown cap, the neck of each bottle is frozen, allowing the crown cap to be removed and the plug of spent lees to be expelled in a process called disgorgement.

The now-empty space at the top of the bottle is then re-filled, in the case of the College Cellars blanc de noirs, with a bit of Riesling juice, a touch of brandy, and a trace of sulfur to preserve it.

The transfer method follows the early steps of the méthode champenoise but avoids the time-consuming riddling process by transferring the wine to a tank, filtering out the lees, and then putting it back into bottles.

In the charmat method, the wine is fermented in tanks instead of in the bottle.