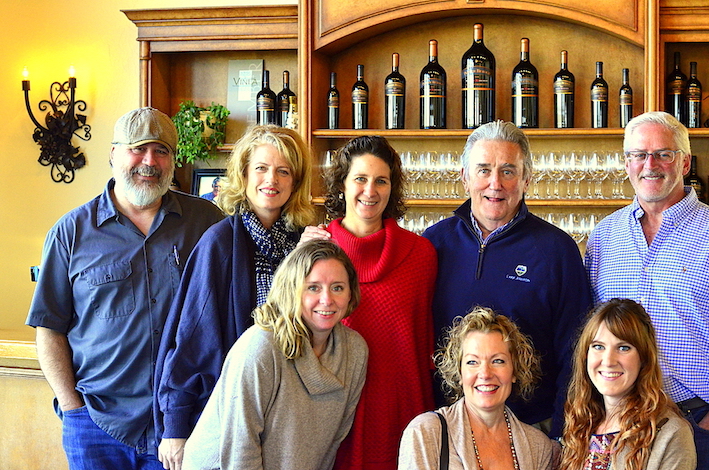 WALLA WALLA, Wash. — You’ve been in those crowded tasting rooms, where folks are elbow to elbow, everyone waiting for their next pour. A few people are loud, having visited several other tastings before this one.

Perhaps there are a few crackers or nuts on offer as palate cleansers, perhaps not. The person pouring would love to answer your questions about the growing conditions during the particular vintage in your glass, but doesn’t have time for more than a word or two. If you knew more about these wines you might enjoy them more, but there’s no easy way to find out. You leave disappointed, having maybe bought one bottle, just to be polite or to have the tasting fee waived.

Now contrast that experience with this one.

You’re in a hushed wine library. You’re deep under the cellar, where the lights are dim, and you’re surrounded by old bottles. You’re comfortably seated with six or eight other people, and you have a sommelier all to yourselves. The wines in front of you have been thoughtfully paired with gourmet bites. There’s no pressure to buy, no pressure of any sort. For the next hour and a half or so, you are there to do nothing but nibble, sip, discuss and learn. 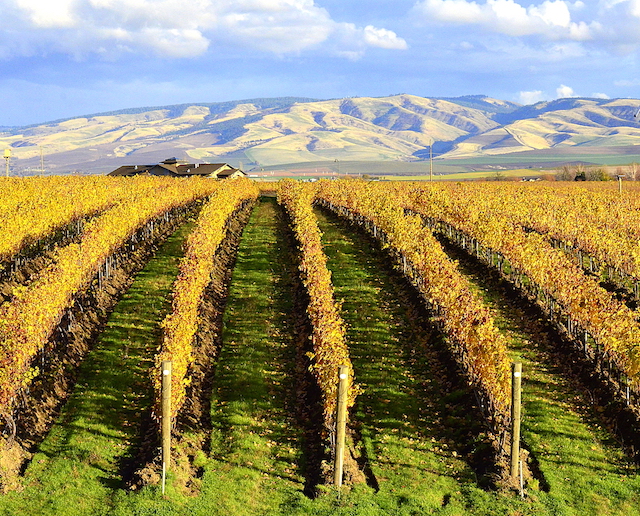 It sounds idyllic, but this is the food and wine pairing experience developed at Pepper Bridge Winery by Jean-François Pellet and director of consumer sales Jennifer Clapp. Pellet is the winemaker. Clapp conducts the sessions, and the food is prepared by Rich Koby, executive chef at Walla Walla’s Fat Duck Inn.

Pellet is a third-generation winemaker from Switzerland and founding winemaker at Pepper Bridge, which launched in 1998. Clapp is a certified sommelier, and Koby is a classically trained chef, so you can rest assured that you are in good hands.

Your experience begins with a tour of the estate vineyards, all done from the tasting room’s balcony with its panoramic view of the vines against the lovely backdrop of the Blue Mountains. Clapp explains that Pepper Bridge is a 100 percent estate winery, using only grapes they grow in their own vineyards. She adds that their farming methods are 100 percent sustainable, and that they use no pesticides or herbicides. She points out the perches they have set up to encourage hawks to keep vineyard rodents in check and the boxes they have set up for barn owls “to take the rodent night shift.”

“J-F (as Pellet is called) is a firm believer in letting the vineyards take care of themselves” Clapp says. “But we do help things along by bringing in beneficial insects like ladybugs and by using compost tea to fertilize our vines.”

Next, Clapp walks you through the winery, stopping to point out the optical grape sorter that Pellet had a hand in designing in 2010. This is a purpose-built machine that does four times the work that humans could do. Normally, sorting the incoming fruit is a mind-numbing task, as harvest workers sort through the grapes by hand, removing leaves, twigs and other MOG, short for “matter other than grapes” that can include insects, rodents and birds.

The optical sorter employs 130 HD cameras that scan the incoming fruit every 1/300th of a second, then uses 120 air nozzles to blast away detritus based on the parameters the winemaker has programmed in. For example, if you want all of your grapes to be perfectly round, the sorter will detect any grape that is even minutely squashed and reject it. Here too Pepper Bridge strives for sustainability; all of the fruit rejected by the sorter gets fed to local cattle.

You will also learn about the operation of the gravity flow wine production system, which Pepper Bridge claims was the first one in the state. Not using pumps during the early stages of winemaking is gentler on the juice, Clapp tells the group.

Passing through the oak-scented barrel rooms, she’ll lead you to the wine library where poured glasses and lovely plates await you. Clapp steps before the group, ready to conduct the tasting. 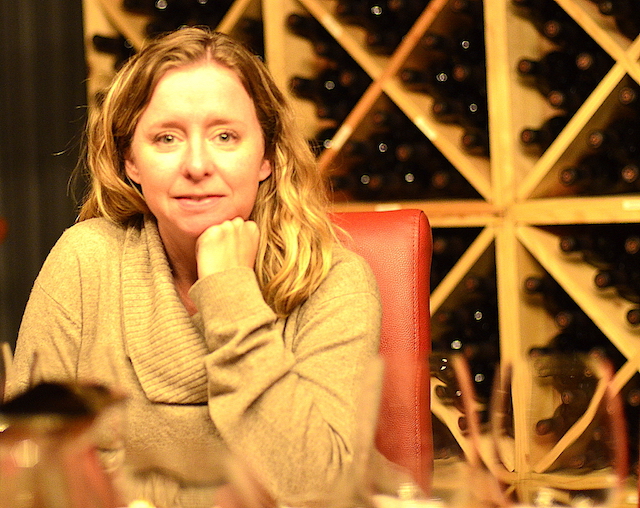 Once a graphics designer, Clapp was laid off during the economic crash of 2008. After spending a year regrouping in South America, she decided that her future was in wine. She took wine classes at South Seattle Community College while working on her sommelier certification, working at Seastar restaurant in Bellevue and serving as the tasting room manager at Pepper Bridge’s Woodinville tasting room.

Meanwhile, Pellet was looking for a way to showcase his wines with food. He created a new position at Pepper Bridge in Walla Walla for someone with both a food and wine background. Clapp made the move.

“Just to pair red wine with a steak is kind of low-hanging fruit, if you ask me,” Clapp says as she introduces the food pairings. “So one of the challenges with this class is to do pairings that aren’t red meat. It’s also important to have a little bit of quiet with the wine. When you serve wine at a party at home, everyone’s in the kitchen and there’s music and talking and lots of open bottles of wine, and it’s all great, but kind of all mixed up together. But here you get the opportunity to smell and taste the wines next to each other and think about why you like the wines, and whether you like them with certain foods.”

The pairing menu is refined and elegant. Pepper Bridge’s three red wines are matched with pretty much everything but red meat. Clapp tells the group the story of how the food pairings came to be.

“Cynthia and Rich Koby run the Fat Duck Inn, and I partnered with them this season to pair their food with our wine. When we started, Rich asked me to show up at the Fat Duck with three bottles of wine. When I walked in there was a huge board laid out with about 300 different dishes on it. There were spices in little jars, loose leaf teas, different salts, raw nuts, roasted nuts, salted nuts, raw fruit, dried fruit, anything you could possibly imagine was on that table in little dishes. Then he and Cynthia and I dove right in, and we had so much fun tasting blueberries with the wine, and tasting the spices, and the cheeses. It was really a great experience to try all the different components with the wines.”

Paté to beets to pastrami 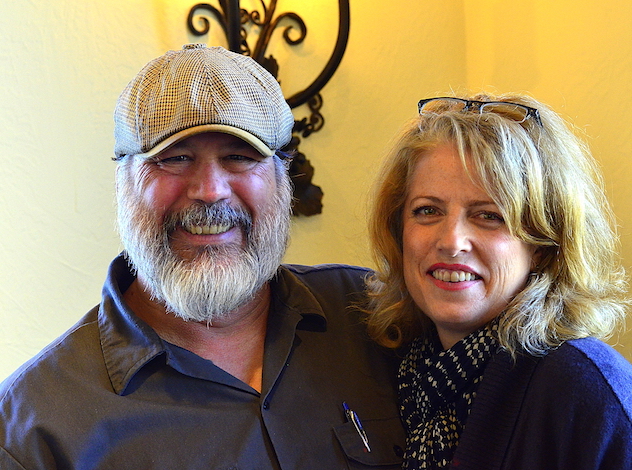 From that work session came the following menu:

Welcoming all comments with “nothing is stupid, nothing is trivial,” she has the class start by smelling all the wines. She has the group swirl and sniff, going back and forth through the wines several times as she points out aroma notes that are becoming apparent with the passage of time and describes the contrasts between the wines. She uses the Merlot as the opportunity to point out the effects of the tannins and the acid, and discusses their role in aging the wine.

She mentions that the U.S. has actually surpassed France in wine consumption per capita because the French drink wine with dinner, “and not before, during and after like we do. We tend to open a bottle of wine at 4 o’clock,” she says.

A guest interrupts with, “Are we supposed to be waiting for 4 o’clock?”

“I meant 4 o’clock East Coast time,” she quips as the group dissolves in laughter.

Pairings focus on complementary, not contrast

As the participants move on to the food, Clapp cautions them.

“Don’t expect that these are the Holy Grail of pairings. Perfect pairings are very hard to find. I encourage you to experiment, take a little bite of the pâté with the Merlot, and then try it with the other wines and see how they differ. Try a dab of mustard with each of the wines.”

Clapp’s philosophy about food pairings is to pair like with like, as opposed to pairing wines that contrast with the food. She also discusses the importance of choosing food with a fat component when drinking tannic wine, saying that the fat tempers your taste buds and makes the wine smoother.

Following her lead, the guests apply dabs of the various ingredients to their forks and try them with each of the wines, sometimes grimacing, sometimes humming contentedly. As they eat and drink, Clapp stresses the importance of educating your palate, using herself as an example.

“The more you learn the more your tastes change,” she says. “I grew up drinking the 50s and 60s Bordeaux wines that my Dad served, so Pinot and Chardonnay tasted stupid to me when I first tasted them.

“At first, Pinot was like the Coors Light of wine to me — watery and just silly,” Clapp continues. “But then I learned how it’s such a finicky grape, so temperamental and hard to grow, and how it’s hard to extract its beautiful flavors. Now I could spend an entire day just smelling a glass of Pinot without ever even drinking it. And it goes with everything. So because I’ve educated myself about it, I have such a different perspective about it now.”

If you would like to further the education of your own palate and gain a new perspective, send an email to jennifer@pepperbridge.com. Advance reservations are required, and there must be a minimum of two participants. The fee is $50 per person.