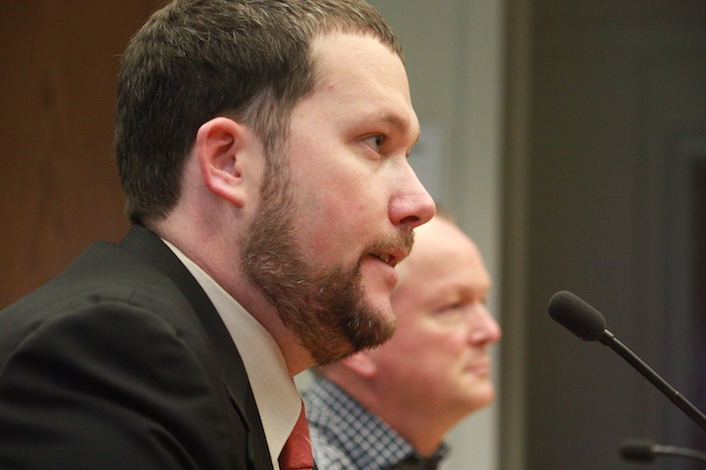 Josh McDonald of the Washington Wine Institute, and Seattle attorney Paul Beveridge, owner/winemaker of Wilridge Winery in Yakima, testify in support of Senate Bill 5427, which would eliminate the state wine tax imposed on wineries that produce less than 8,000 cases. (Photo by John Stang/Special to Great Northwest Wine)

OLYMPIA, Wash. — A bill is in motion to make small Washington wineries exempt from paying the Evergreen State’s wine tax.

Currently, wine producers are taxed at a rate of almost 23 cents a liter for table wines and a little more than 45 cents a liter for fortified wine. Warnick’s bill would remove the tax on the first 20,000 gallons that a winery produces annually. That equates to about 8,400 cases of wine.

If the bill becomes law, the tax break would cost the state about $2 million each year.

Washington wineries pay one of the higher tax rates in the nation, testified Josh McDonald, executive director of the Washington Wine Institute.

Seattle attorney Paul Beveridge, owner of Wilridge Winery, said such a break would eliminate the wine tax for roughly 80 percent of the state’s wineries.

“Wineries are one of the small businesses in Washington that don’t get any tax relief,” he said.

Despite the overall number of Washington wineries growing, at least 20 small wineries have shut down since the Great Recession of 2008, with the state wine taxes becoming a significant burden on small wineries, Beveridge estimated.

Beveridge tried to get exact numbers of wineries that have gone out of business, but said the Washington State Liquor & Cannabis Board could not provide him the figures.

Paddles are raised during the Winemaker Gala, which is the signature event for the Auction of Washington Wines in Woodinville. (Photo by Richard Duval Images)

Also in the past couple weeks in Olympia:

• A public hearing was held by the House Commerce & Gaming Committee on House Bill 1718 to make it easier for wineries to participate in private auctions for charities and to promote the state’s wine industry.

Right now, when private auctions are held, each participating winery must fill out paperwork and pay a $25 fee to the state Liquor & Cannabis Board. That can get complicated and unwieldy if 70 wineries are participating, bill sponsor Rep. Bill Jenkin, R-Prosser, said at a hearing last week. Jenkin also owns the Prosser Vineyards & Winery.

His bill would change that requirement. Only the nonprofit organization staging the private auction would be required to fill out the permit and pay the $27 fee to the state.

“It has become a bit cumbersome and time-consuming,” said Martine Kulesa, development coordinator for Auction of Washington Wines about the current permit system.

The Auction of Washington Wines is a nonprofit organization that stages funding-raising auctions for Seattle Children’s Hospital and the Washington State University viticulture program.

Grocers, restaurants and private collectors buy the wines at its auctions — which are also marketing Washington wines to out-of-state buyers.

• The same committee held a public hearing on House Bill 1893 by Rep. Brandon Vick, R-Vancouver, that would allow a licensed distributor of spirits or wine to impose a credit card fee on a purchaser licensed to sell spirits or wine.

A distributor’s small profit margin, coupled with swallowing an reimbursed credit card fee, is what prompted the bill, Vick said.