Santo takes over for Munnell at Mercer Estates 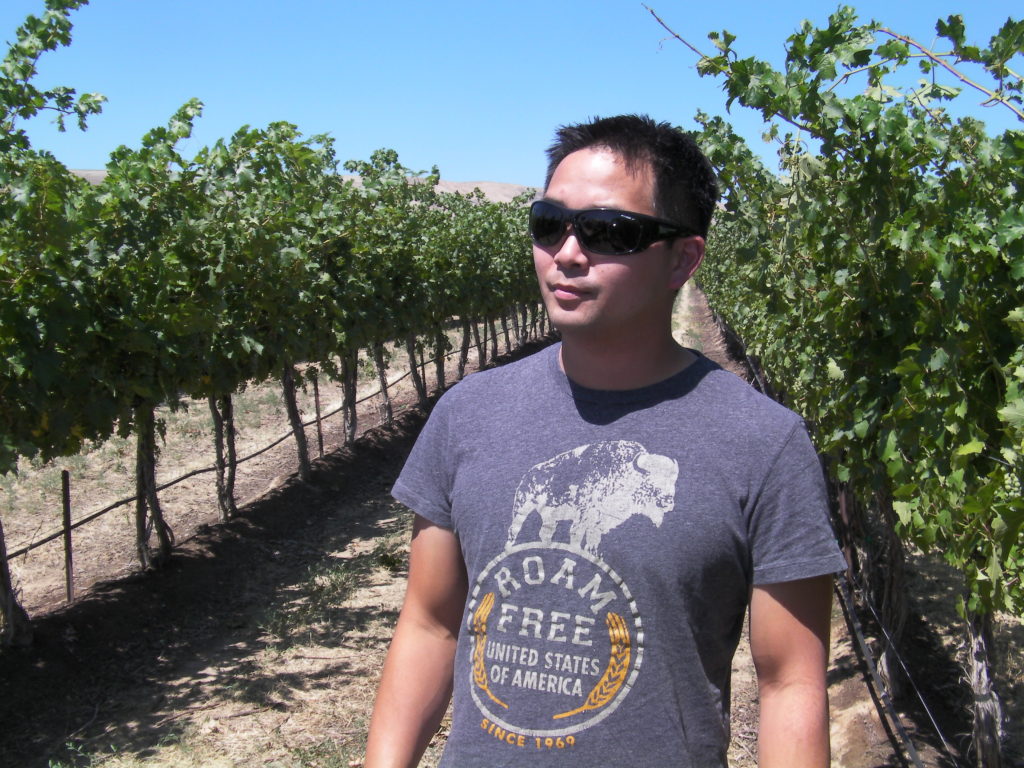 Jeremy Santo, a product of Washington State University and the Yakima Valley town of Prosser, is the new head winemaker for Mercer Estates. (Photo by Eric Degerman/Great Northwest Wine)

PROSSER, Wash. – One product of Washington State University and Ste. Michelle Wine Estates is taking over for another at Mercer Estates as Jeremy Santo has replaced Jessica Munnell as head winemaker.

Munnell took Mercer to new heights during her 5 1/2 years as winemaker, using estate fruit from the Horse Heaven Hills to wow judges at international competitions and helped to grow the brand from 22,000 cases to 70,000 cases. She’s also the younger half of one of Washington’s most dynamic winemaking couples as the wife of Columbia Crest’s Juan Muñoz Oca.

“I’ve been very proud to say that I’ve been the winemaker for Mercer, and it is going to be bittersweet to not able to say that I make the wine for Mercer,” Munnell told Great Northwest Wine. “It just got to be too much. Life is flying by too quickly, and our kids are very vocal about Juan and I being on the road as much as we both have been.”

Rob Mercer, owner of Mercer Wine Estates, said, “We’re sorry to see Jessica go, but we totally understand with the responsibilities that come with family.

“At the same time, Jeremy is a Prosser boy who is coming back to his roots. He’s a good fit culturally for us and a good fit with our wines. He’s got all the right credentials and has a great attitude.” 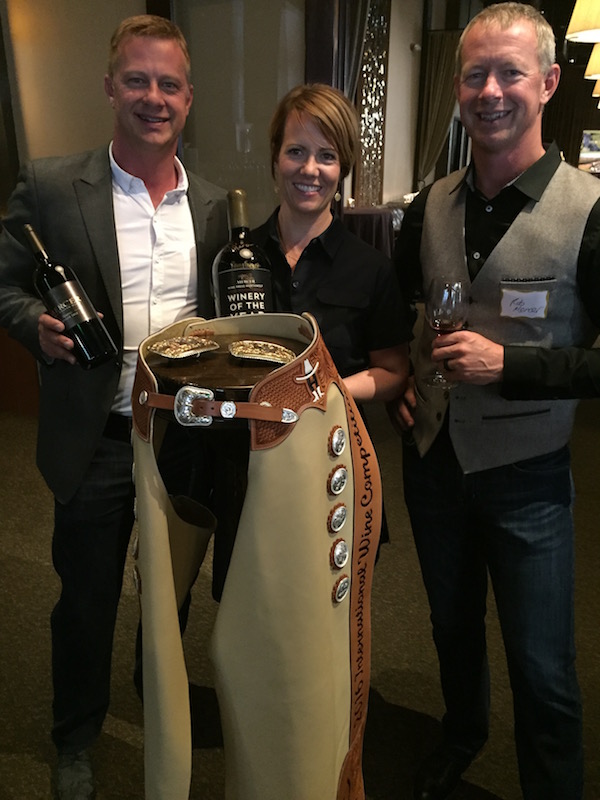 National sales director Will Mercer, winemaker Jessica Munnell, and owner Rob Mercer celebrate some of their successes, which include Wine Press Northwest magazine’s 2016 Washington Winery of the Year and a pair of championship chaps from the 2016 Houston Livestock Show and Rodeo International Wine Competition. (Photo by Eric Degerman/Great Northwest Wine)

Santo, 38, has years of experience working for immense companies such as Ste. Michelle and Wahluke Wine Co. He leaves a legacy of award-winning wines he made for Butch Milbrandt’s Ryan Patrick brand.

“This came as a surprise, but it’s an awesome opportunity for me,” Santo said. “Growing in up Prosser you know of the Mercer family, their history and the tradition. It feels like a dream come true.”

He steps into a situation many winemakers would envy. In 2016, Wine Press Northwest magazine named Mercer Estates as its Washington Winery of the Year. This year, the Mercer Canyons 2014 Cabernet Sauvignon, a $17 wine, won best of show at the Indy International Wine Competition, a judging staged at Purdue University.

“There’s no doubt that I’ve got some big shoes to fill,” Santo said.

This summer, Mercer Estates joined the burgeoning wine scene in Seattle’s industrial Georgetown neighborhood, opening a satellite tasting room. Their wines can be found in 47 states, and they recently partnered with the Sonoma-based V2 Wine Group and the Delicato family of Napa to assist with sales, marketing and distribution.

“Jeremy is a Coug, a great guy and a talented winemaker, which makes my decision to leave easier,” Munnell said. “He’s not a jerk. He’s not demanding. He’s not someone to throw his weight around. He’s easy to get along with. There’s a good team that he’s taking over, and we all had not very dry eyes when I told them that I was leaving.”

Mercer said, “She was definitely instrumental in our success and helped define our style, and we’re not planning on changing that style. She did a great job of expressing the terroir of our vineyards.”

The Mercer job signals a full-fledged homecoming for Santo, a graduate of Prosser High School, and the transition should be an easy one. Munnell hired him earlier this summer on a part-time basis to spearhead Mercer’s growing custom-crush operation. It was the third time in 15 years that Santo worked with Munnell, first as a lab tech at Snoqualmie Vineyards when he was fresh out of WSU with a biology degree. Several years later, she brought him on as an enologist at Ste. Michelle’s Canoe Ridge Estate facility. Munnell, with an eight-month-old daughter, would resign from Ste. Michelle soon after.

“I told her, ‘Do you not like me? Every time I show up you leave,’ ” Santo said with a chuckle. “I was really looking forward to working with her, but she’s still with us through harvest.”

Mercer said the plan is for Munnell to also remain involved in blending the wines for a period of time.

“That’s no problem, and I’m happy to do it,” Munnell said, “but Jeremy has so much experience and talent that he certainly doesn’t need me to hold his hand.

“I can’t begin to tell you how much I have enjoyed working with the Mercers, and I’m glad that my leaving seemed to be the perfect time for everybody,” she added. “Jeremy was going to be working part-time for Mercer and part-time for Ryan Patrick. Now he’ll be at Mercer full-time.” 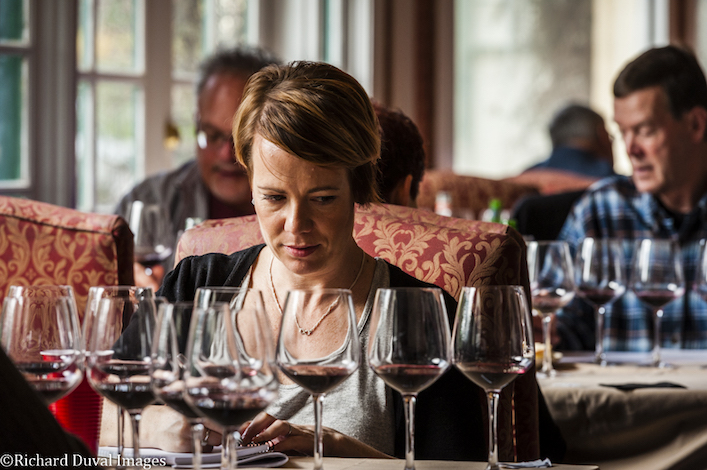 Munnell will continue making wine on a substantial level. She just won’t need to travel across the country working the market. The Richland High School grad will be making wine for Buried Cane, a 30,000-case brand that Sonoma-based Vintage Wine Estates bought from the Middleton family. She will work on those wines at the Pacific Rim Winemakers facility near Double Canyon’s new winery in West Richland.

“That was the perfect offer for me,” she said. “I get to keep working in the wine industry without having to run a winery, and once the wines are all in tank, it’s not a full-time job.

“And it is eight miles from our house to Pacific Rim,” she chuckled.

Ironically, the Buried Cane wines have been made by Kendall Mix, who left Walla Walla, the Middletons and Cadaretta this summer to head up the Milbrandt-owned Wahluke Wine Co. Milbrandt spokeswoman Stacy Bellew confirmed that Mix will take over the winemaking for Ryan Patrick.

“It’s really tough to leave that behind,” Santo said. “I’m helping with this harvest and collaborating with Butch and Kendall. Butch is a great man and was so supportive about this opportunity with Mercer. That made me feel so much better. I’ve been very fortunate for all the opportunities that have come to me.”

Milbrandt afforded Santo the time and space to develop his Schlagel Santo label, an ultra-boutique project he owns with longtime friend/viticulturist Jason Schlagel. Mercer said those few barrels of the Rhône-inspired blend of Grenache, Syrah and Mourvèdre by Schlagel Santo will be welcome under the Mercer roof.

The project that Munnell and the Mercers initially hired Santo for is their growing custom-crush operation fueled by the family’s extensive vineyards that are expanding in the Horse Heaven Hills. Santo helped process as many as 13,000 tons of grapes a year at Wahluke Wine Co. – the equivalent of 850,000 cases of wine.

“I’ll have a role in that as part of the management team, and that’s another two years out, but we’ll need a whole new crew,” Santo said. “When it’s in full production, we’ll produce the large majority of the Mercer Ranch Vineyards fruit.”

On Friday, Sept. 8, the first grapes he brought in as head winemaker at Mercer Estates were Sauvignon Blanc from the family’s Culloden Vineyard.

“That was kind of cool,” he said. “One of the things I’m looking forward to working with is Spice Cabinet Grenache for rosé – trying to get that color out of the Grenache.

“It’s been a few years for me, but we worked with a lot of Horse Heaven Hills fruit when I was at Canoe Ridge Estate. The Cabs are amazing, and I can’t wait to work with the Syrah and the great small blocks the Mercers have. And Malbec, which is definitely fun to work with, is a real passion of Rob’s.”

Santo’s parents were born and raised in Hawaii, graduating from the University of Hawaii with science degrees. His father, a plant pathologist, earned his doctorate at University of California-Davis before landing a position as nematologist at the WSU research station in Prosser. Jeremy’s older brother, Daron, is the head girls basketball coach at Kennewick High School. All the Santo boys starred in varsity sports year-round at Prosser.

“I don’t think I’ll be playing as much golf or snowboarding with this job,” said Santo, who is raising two small children in Pasco with his wife, Michelle. 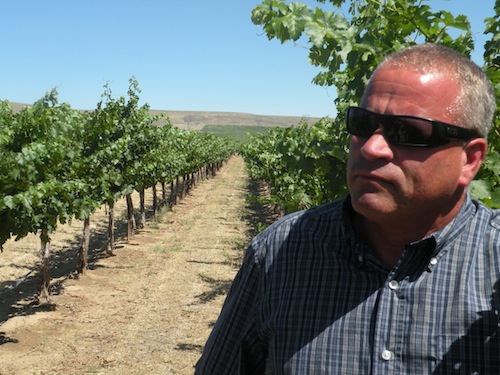 And now Munnell, 41, can dote on her own Wautoma Wines, a 200-case brand she co-owns with vineyard manager Tom Merkle, whose holdings include Wautoma Springs Vineyard in the Cold Creek District west of the Wahluke Slope.

“Working full-time at Mercer never afforded me the time to focus on Wautoma,” she said. “Now I can try to grow that rather than turning it over to a wine broker. I’ve never had the time to go outside of Washington with Wautoma.”

“Yup, two legends of the Washington wine industry,” Munnell smirked. “We get to try to fill their shoes.”

Fortunately, meetings for Auction of Washington Wines mean car rides rather than waking up the family for pre-dawn trips to the airport.

“I tell people that I have three kids — my oldest is 42,” Munnell chuckled.