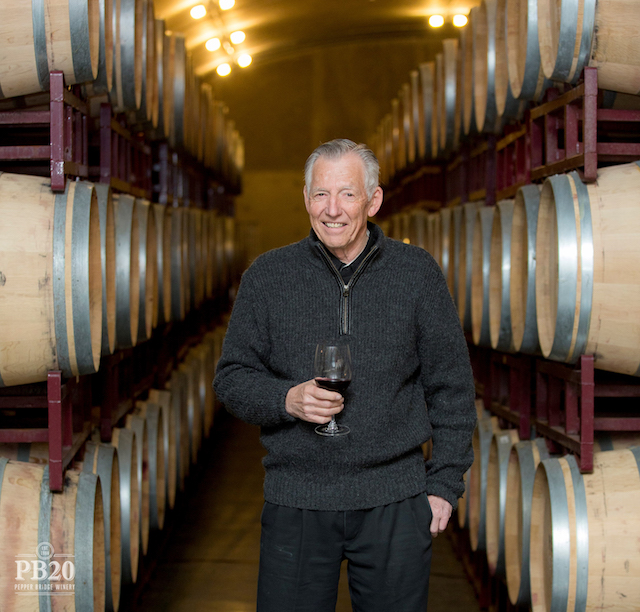 Respected grower/vintner Norm McKibben of Pepper Bridge Winery in Walla Walla, Wash., the only person to have served as a director on both the Washington State Wine Commission and the Oregon Wine Board, headlines the third annual Northwest Wine Encounter on June 1-3 in Bellingham, Wash. (Photo courtesy of Pepper Bridge Winery)

The Northwest Wine Encounter is a weekend wine event that’s moving to the the Four Points Sheraton Bellingham Hotel and Conference Center. Cost of $399 per person based on double occupancy includes: 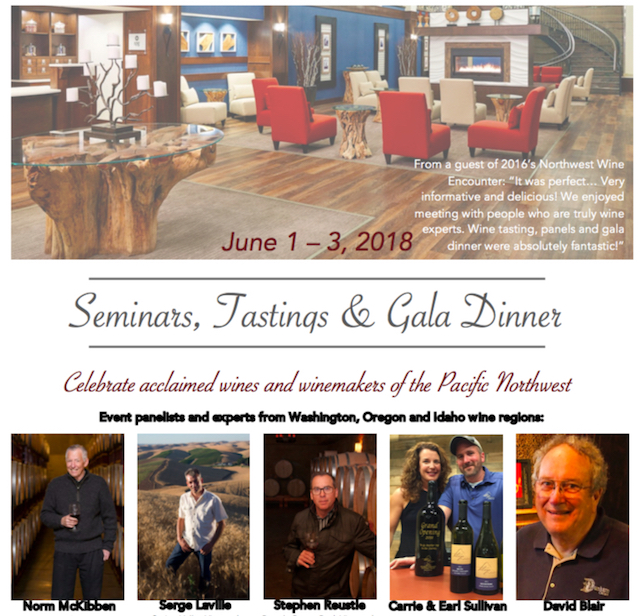 The third annual Northwest Wine Encounter is a weekend-long series of seminars and tastings. (Photo courtesy of DS Vintners)

Norm McKibben, managing partner, Pepper Bridge Winery, Walla Walla, Wash. He moved to the Walla Walla Valley in 1985 after spending 25 years as a civil engineer in the Bay Area. Four years later, he invested in Hogue Cellars. By 1997, he’d planted Pepper Bridge Winery and partnered with Gary Figgins of Leonetti Cellar and Marty Clubb of L’Ecole No. 41 on expanding Seven Hills Vineyard. In 2002, he and his son, Shane, established Les Collines Vineyard. Two years, later, their group purchased 2,000 acres to create the SeVein project. McKibben has the unique distinction of serving on the Washington State Wine Commission and the Oregon Wine Board. Last year, he received the Washington Winegrowers Lifetime Achievement Award.

Serge Laville, winemaker, Spring Valley Vineyard, Walla Walla, Wash. Laville, born in France’s Rhône Valley, began at Spring Valley in 2002 as assistant winemaker for Devin Derby and took over the winemaking when Derby died in a car accident. Soon after, Ste. Michelle Wine Estates purchased the winery but retained Laville as the winemaker. He’s turned the Derby family’s 111 acres of award-winning reds, the latest being the 2014 Frederick, which ended up at No. 39 on Wine Spectator’s Top 100 wines of 2017. In 2009, the 2006 Merlot-based Uriah ranked No. 60. In 2006, the 2003 Uriah was listed No. 25th. The 2018 vintage will mark the 25th anniversary of the Derby family’s first sale of grapes, which went into the cellars of Leonetti, Tamarack, Reininger and Walla Walla Vintners.

Stephen Reustle, owner/grower/winemaker, Reustle-Prayer Rock Vineyard, Roseburg, Ore. Reustle, a CPA on the East Coast, sold a successful marketing company and moved to the West Coast to grow and make wine, initially Tempranillo. In 2001, he found his Umpqua Valley vineyard site on the web. He’s since become the U.S. pioneer for Grüner Veltliner, an Austrian grape, and Reustle also earned the title of Best New World Syrah at the exclusive Six Nations Challenge in Australia. In 2017, Wine Press Northwest named Reustle-Prayer Rock Vineyard as its Pacific Northwest Winery of the Year. This year, his wines earned seven gold medals at the San Francisco Chronicle Wine Competition.

Earl & Carrie Sullivan, owners/winemakers, Telaya Wine Co., Garden City, Idaho. College sweethearts in Kentucky, their successful careers led them to Boise, Carrie as a veterinary surgeon and Earl as a biochemist for pharmaceutical company. The hectic nature of both jobs prompted them to start a business that one day could involve their two sons. By 2015, they were winning gold medals in West Coast competitions for their red wines. They use fruit from Idaho’s Snake River Valley as well some of Washington’s top vineyards, including Boushey, Discovery and Quintessence. Wine Press Northwest magazine selected Telaya — pronounced tuh-LIE-uh — as its 2016 Idaho Winery of the Year. Last year, they built a multi-million dollar winery/tasting room along the Boise River.

David Blair, owner, Dunham Cellars, Walla Walla, Wash. Blair and his son, John, operate Dunham Cellars, one of the Washington’s most recognizable brands not only because of the award-winning juice but also its founders, Mike and Eric Dunham. In 2008, Wine Press Northwest named Dunham Cellars as its Pacific Northwest Winery of they year. Sadly, Mike died in 2013 and Eric in 2014, but Mike’s widow, Joanne and the Blair family — which is based in Bellingham — continue to produce award-winning wines from their 25,000-case production. In 2016, their Syrah won best of show and their Riesling took best white at the Walla Walla Valley Wine Competition. Their 2014 Trutina earned at gold medal at the 2017 Great Northwest Invitational.

For more information about the third annual Northwest Wine Encounter, or to reserve your spot, contact Suresh Rao of DS Vintners online or call (650) 270-8791.