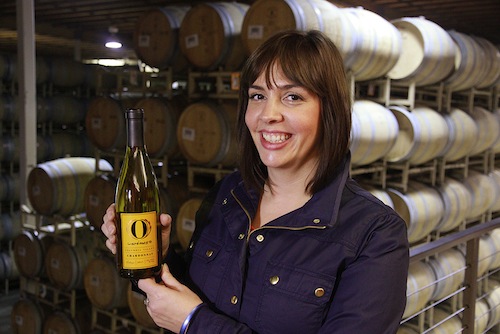 Katie Nelson and her husband already were among “the power couples” in the Washington state wine industry.

On Tuesday, they became arguably the most powerful when Ste. Michelle Wine Estates named Katie as senior director of winemaking for Columbia Crest in Prosser, putting her in charge of more than 1 million cases annually. Her husband, Flint, works in Mattawa at Wahluke Wine Co., where a similar amount is produced.

She replaces Juan Muñoz Oca, who will shift his focus to Ste. Michelle’s young and fascinating INTRINSIC Wine Co., and Borne of Fire projects. He maintains the title as Vice-President of winemaking for Ste. Michelle Wine Estates, which he received this spring, and will continue to collaborate with other SMWE winemakers.

“As a winemaker who’s traveled the world, and one of the leading female voices in our industry, Katie brings a unique and diverse take on winemaking to a 35-year-old winery,” Muñoz Oca said in a statement. “Her dedication, experience and leadership will take our team of young, talented winemakers to new heights; I can’t wait to see the results.”

She spent 17 years as a winemaker for Ste. Michelle Wine Estates prior to overseeing the Eastern Washington winemaking for Charles Smith and his Wines of Substance project.

“My winemaking approach is bold and explores variety with a gentle hand, aiming to create wines which are elegant, but exciting,” Nelson said. “When starting out, making the wrong decision and taking risks scared me. With 22 years of experience in Washington, I take those chances and have never been disappointed. Somewhere along the way, I tossed my nerdiness aside and have learned to be bold.”

Nelson grew up in Anaheim, Calif., before studying chemistry and enology at Sonoma State University. Not long after she turned 21, Nelson landed a job as a harvest intern in Healdsburg, Calif. In 1999, Ste. Michelle Wine Estates hired her.

She left in 2015 to become associate winemaker for K Vintners, Charles Smith Wines and Wines of Substance. Her work résumé spans 150 wines of 90 or more points and nine 95+ scores from publications such as Wine Spectator, Wine Advocate, Wine Enthusiast and Wine & Spirits.

“Katie Nelson is always concerned with quality and attention to detail,” renowned grower Dick Boushey said. “Her enthusiastic, all-inclusive approach makes it a pleasure to work with her. She brings an extensive range of experience both in the vineyard and in the winery. It is hard to imagine a more qualified person for this job.”

In addition to serving as a homecoming for her, Ste. Michelle pointed out that Tuesday’s announcement marks just the third winemaking change in the Paterson winery’s history. Doug Gore served as head winemaker from 1982 until 2003, when Ray Einberger took over. Eight years later, Muñoz Oca was selected as Einberger’s replacement.

Nelson will be responsible for all winemaking decisions across the range of the Columbia Crest wines including the Reserve, H3 and Grand Estates tiers. She also will manage innovation projects at Columbia Crest.

“We are lucky she calls Washington wine country home and even luckier that she has decided to take over the winemaking of one of the oldest, most acclaimed wineries in the state’s rich winemaking history,” Muñoz Oca said.

Einberger and Muñoz Oca took Columbia Crest to new heights in 2009 when Wine Spectator selected the Columbia Crest 2005 Reserve Cabernet Sauvignon as its No. 1 wine in the world – an achievement that remains unmatched in the Washington wine industry.