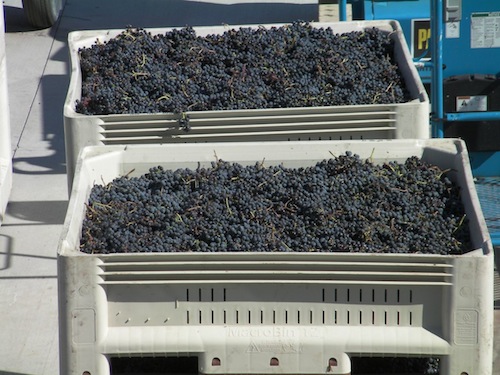 Washington state is expected to harvest more than 200,000 tons of wine grapes this fall, exceeding the record of 188,000 tons. (Photo by Andy Perdue/Great Northwest Wine)

The 2013 vintage will most likely go down in the record books as the first harvest with at least 200,000 tons of Washington wine grapes harvested.

Vicky Scharlau, WAWGG’s executive director, said the grape growers use the estimate for planning purposes, so the final totals of Washington wine grapes announced in January never end up exactly the same as the pre-harvest prognostications.

Scharlau said Washington now has 50,259 acres of wine grapes, up from about 43,000 just a couple of years ago. Of that number, 28,815 acres are for red wine grapes. The acreage was not broken down by American Viticultural Area. 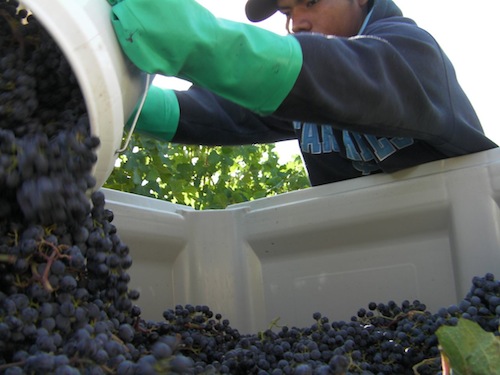 Washington state now has more than 50,000 acres of wine grapes. As a result, 2013 should be a record crop. (Photo by Andy Perdue/Great Northwest Wine)

Charlie Hoppes, winemaker/owner of Fidelitas Wines on Red Mountain, said this year’s warm weather has the industry set up for an early harvest. He said excessive heat has left cluster weight and berry size down, which he thinks might reduce the crop a bit from what the estimates indicate. Hoppes added that smaller berries are a good thing.

“From a winemaking perspective, it’s great,” he told Great Northwest Wine. “We can make great wine from small berries” because the juice-to-skin ratio is closer and wine flavors will be more concentrated.

Kevin Corliss, vineyard operations director for Ste. Michelle Wine Estates, said he agrees smaller clusters will bring in a slightly smaller-than-expected crop, though he isn’t too concerned. He said his viticultural crews went through their vineyards re-estimate crop levels and found them to be the same because newer vines have more fruit on them than expected.

Dick Boushey, owner of Boushey Vineyards in the Yakima Valley, said many vineyards in the Horse Heaven Hills were still getting back to normal production after a freeze in 2010 damaged the vines. He also pointed out that hail damage last year caused him to lose nearly half his grapes.

Ryan Flanagan, who manages Evergreen Vineyard for Milbrandt Vineyards in the Ancient Lakes, said a storm that came through Saturday evening left about 5-10 percent hail damage.

Boushey said the new plantings that have boosted Washington’s vineyards past 50,000 acres are primarily Cabernet Sauvignon, Chardonnay and Merlot. New plantings, he said, are heavy, and that is keeping nurseries hopping.

“You can’t hardly buy a plant right now,” he said.

He noted that the buds for the 2014 harvest formed this summer without incident.

“The vines are set up for next year, too,” he said with a grin.