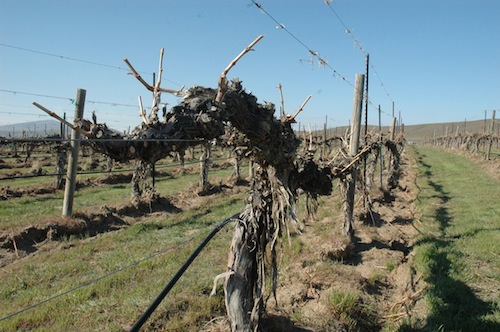 Vines from Ciel du Cheval Vineyard on Red Mountain date back to the mid-1970s. (Photo by Andy Perdue/Great Northwest Wine)

BENTON CITY, Wash. – If Jim Holmes had been better at playing the stock market, he might not have ever gotten into the wine industry.

Thank goodness because then he might not have discovered Red Mountain, one of the best places anywhere to grow wine grapes.

Holmes worked at Hanford, where he was a nuclear engineer. There he met John Williams, and the two became friends.

“Being engineers, John and I knew we were smarter than anyone else,” Holmes said. “So we decided we would get rich by investing in the stock market. It took us six months to lose all of our money.”

After that failure, they decided to get into real estate, and Williams’ father-in-law owned 80 acres of scrubby land above the Yakima River near the town of Benton City. He’d paid $100 per acre, so the two bought it from him in 1972 for $200 per acre. Everyone thought it was a good deal.

A few months later, the pair read a report by Walter Clore of Washington State University about the viticultural viability of the area.

“My God, we can grow grapes here,” Holmes said. “Let’s grow some grapes!”

They spent the next three years drilling a well and bringing in electricity, then they planted wine grapes on what would become Kiona Vineyards.

While it was Holmes’ first venture into the grape industry, the allure of wine had permeated his life long before. He grew up in the Bay Area city of Vallejo, just 15 miles from Napa Valley. Many Italian immigrants lived in the area, so great wine and food were a natural part of life.

“When it’s all around you, you don’t have the wine bug,” he said. “It’s like mowing the lawn.”

When he moved to Washington state in 1959, there was no wine culture to speak of, and he ended up traveling to Europe and learning more and more about wine. All of that set him up for the adventure of being a Red Mountain pioneer. 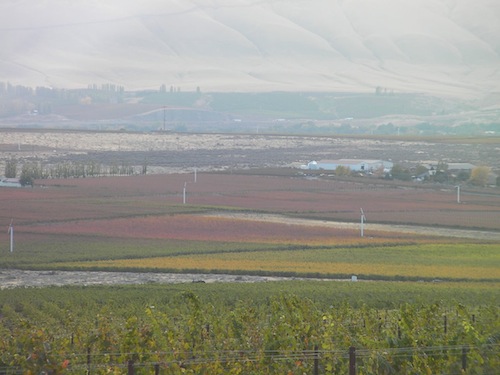 Ciel du Cheval Vineyards is one of Red Mountain’s oldest. Today, more than 1,300 acres of wine grapes are planted there. (Photo by Andy Perdue/Great Northwest Wine)

At the same time Holmes and Williams planted Kiona, they also put together a group of investors to plant another vineyard across the road.

“We were all a community of friends,” he said.

Part of that group were David and Patricia Gelles, two wine enthusiasts who were interested in getting their hands dirty. A decade later, they would launch Klipsun Vineyards on Red Mountain.

One of the folks in the group had taken some high school French and decided “Ciel du Cheval” was a good name. It was a translation of “Horse Heaven Hills,” the ridge that forms the southern border of the Yakima Valley and faces Red Mountain. It turns out the translation was loose at best, and today French visitors chuckle at the vineyard’s name, which actually means “sky of the horse.”

In 1980, Williams and Holmes launched a winery to go with the grapes, and Kiona has gone on to become one of Washington’s most celebrated producers.

By 1991, Holmes and Williams bought out the other partners in Ciel du Cheval Vineyard. Three years later, they decided to go their separate ways.

“We were looking to the future,” Holmes said. “We were growing older. I had an adventurous spirit and wanted to try new things with new varieties, while John was satisfied with the direction things were going.”

They also realized that if one of them died, the other might not want to be partners with the other’s kids. So they parted amicably and remain best of friends, with Williams taking Kiona and Holmes taking Ciel du Cheval Vineyard. Both have made the best of their opportunities.

Ciel du Cheval Vineyards is one of the oldest plantings on Washington’s Red Mountain. (Photo by Andy Perdue/Great Northwest Wine)

The first is Galitzine Vineyard, a 17-acre vineyard that is a partnership between Holmes and the Golitzin family, owners of famed Quilceda Creek Vintners in Snohomish near Everett. Holmes had been selling grapes to Alex Golitzin since 1980.

The second is Grand Ciel, a partnership with DeLille Cellars in Woodinville. Holmes has been selling grapes to DeLille since 1990.

Holmes said both of these partnership vineyards are farmed to the wineries’ specifications, which allows him to grow grapes in a way that would not necessarily be commercially viable for anyone other than top-tier producers who are crafting some of the world’s greatest red wines.

In addition to Galitzine and Grand Ciel – whose grapes go to the partner wineries – Holmes sells grapes to about 25 wineries, including Fidelitas, Cadence, Mark Ryan, Seven Hills, Tamarack, Ken Wright and Cana’s Feast.

Charlie Hoppes, owner and winemaker at Fidelitas Wines on Red Mountain, calls Ciel du Cheval Vineyard one of the treasures of the Washington wine industry.

“How many people have been growing wine grapes in Washington for 40 years?” he said. “It’s so great to be able to have access to that fruit. It’s fabulous stuff.”

And Fidelitas’ fans recognize its greatness, too.

“We have no trouble selling our Ciel du Cheval Cab in our Woodinville tasting room for $60,” he said. “People don’t even bat an eye.”

Hoppes said Ciel du Cheval’s site is different than other vineyards, even Red Mountain Vineyard, which is adjacent to it. He believes it goes back to the Ice Age floods some 12,000 years ago, which swirled around Red Mountain and created eddies that dispersed the soil unevenly.

“Jim has a clay layer going through part of his vineyard,” Hoppes said.

Holmes said the soil on Red Mountain in general and at Ciel du Cheval Vineyard in particular is high in pH and loaded with calcium carbonate. He believes that might make for the Red Mountain difference.

Holmes, 76, is thinking about slowing down a bit. Ryan Johnson, his vineyard manager, has been working with him for more than a dozen years. And now Holmes’ son Richard has returned to the family farm after leaving the dot-com world.

Holmes has long harbored ambitions to launch a winery but has never pulled the trigger. Richard is now moving forward slowly, using different blocks within the vineyard to produce small amounts of wine made by Hoppes under the brand Ciel du Cheval. The brand began with the 2012 vintage, and some of the white wines already are in the Seattle market under the brand Côtes du Ciel.

Now, more than 40 years after purchasing the ground for the original Kiona Vineyard, the pair’s investment is looking better than ever, as land these days on Red Mountain can go for as high as $50,000 per acre.

Not bad for a couple of guys who didn’t know how to play the stock market.