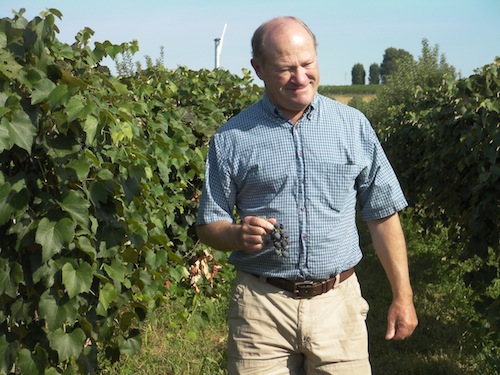 GRANDVIEW, Wash. – Dick Boushey’s plan was to live in the Yakima Valley for one year. That was in 1975.

Like many from the west side of Washington, the wide-open spaces and near-constant blue skies attracted him and have kept Boushey here for near 40 years.

Today, Boushey, 62, is one of the top viticulturists in the United States. Not bad for a kid from the Tacoma suburb of Sumner who wanted to be a banker.

“I had an uncle who farmed over here,” he said. “Dad always liked the Yakima Valley and wanted to move here.”

The family bought an apple orchard, and Boushey, who graduated from the University of Puget Sound, moved over first, planning to stay for just one year.

“The one year turned into four years,” he told Great Northwest Wine. “Then I met Luanne (his wife). She grew up in Bellevue and moved here for two years for a teaching job. We’re still here.” 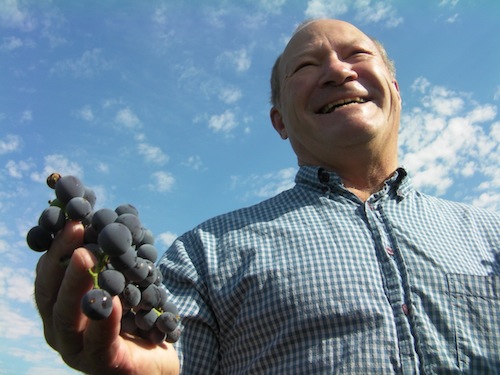 Dick Boushey holds a cluster of grapes in his vineyard. Boushey was inspired to grow grapes after moving to the Yakima Valley in 1975. (Photo by Andy Perdue/Great Northwest Wine)

Back then, there wasn’t much to the Washington wine industry. But Boushey, who already had cultivated a love for wine, met many of the legends of the industry, including Dr. Walter Clore, a Washington State University researcher known as “the father of Washington wine.” He also met Mike Wallace, who was just starting Hinzerling Winery in nearby Prosser, as well as Chaz Nagel, a WSU scientist who worked closely with Clore.

But Boushey wasn’t so sure the Washington wine industry was really viable until he tasted the legendary Chateau Ste. Michelle 1975 Cabernet Sauvignon, a wine that proved great reds could be made here.

Boushey began planting wine grapes on his farm north of Grandview. It wasn’t – and still isn’t – the most sexy area of Washington to grow wine grapes, but it has turned out to be one of the best.

“There was a grape culture here, and there wasn’t in other places,” he said. “It was almost all row crops in Mattawa and the Horse Heavens.”

Otis Vineyard, planted in 1957 by Otis Harlan, is not far from Boushey Vineyard, and that also attracted him to planting wine grapes.

In 1980, Boushey put his first vines in the ground, including Cabernet Sauvignon, Merlot, Cabernet Franc and Chenin Blanc.

“Nobody wanted Chenin Blanc, and it got botrytis,” Boushey said, so he pulled it out and stuck exclusively with red grapes for the next two decades. 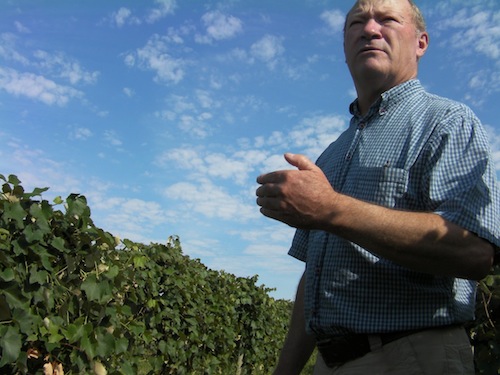 Dick Boushey is one of the most important Syrah growers in Washington, selling fruit to such wineries as Betz Family Winery, DeLille Cellars and Efeste. (Photo by Andy Perdue/Great Northwest Wine)

After a few years, Boushey became interested in Syrah.

“What hooked me was I was over at Columbia Winery, and I wanted to try David Lake’s 1988 Syrah,” Boushey said. “This was the best wine I’d had in a long time, and I wanted to grow some of it.”

He couldn’t get any plants, but by 1993, he convinced Mike Sauer, owner of Red Willow Vineyard, to provide him with some cuttings. Sauer had planted the first Syrah in the state in 1985, and that is what made the 1988 Syrah that Boushey tasted at Columbia.

“It has done really well,” he said.

Boushey Vineyard’s site is much cooler than Red Mountain, which is less than 30 miles to the east. The difference in ripening time can be two to three weeks, which winemakers love for flavor development.

“Everybody tells me Syrah is overdone, but I’m always short in Syrah,” he said.

Overall, Boushey has planted 160 acres of wine grapes, of which 15 percent is white varieties. Starting in 2003, he began planting such Rhône whites as Marsanne, Roussanne, Picpoul, Grenache Blanc and Viognier. He also grows Sauvignon Blanc and Semillon, which he sells primarily to DeLille.

Boushey also grows another 140 acres of apples, cherries and juice grapes. He is a big deal in juice grapes, sitting on the board of directors for National Grape, the farmers cooperative that has owned Welch’s since 1952. With about 200,000 tons harvested annually, Washington is the nation’s largest grower of Concord grapes. 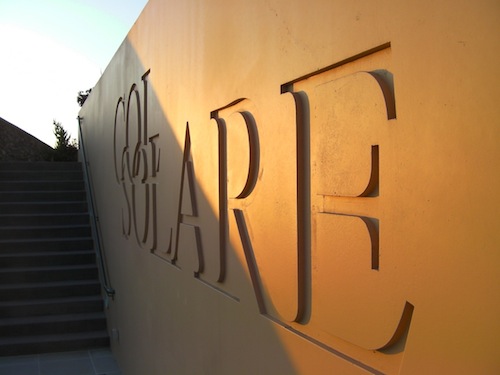 In addition to his home vineyard, Boushey also has branched into other areas of the Yakima Valley. A few years ago, Ste. Michelle Wine Estates recruited him to manage its Col Solare estate vineyard on Red Mountain. Now he also manages Red Mountain vineyards for Fidelitas Wines, Ambassador, Upchurch, Efeste and Thurtle – a total of 175 acres of grapes in the most premium region of Washington wine country. He’s also working with Hamilton Cellars to pull out an orchard on Red Mountain and replant it next spring with wine grapes.

“Dick has a great ability to balance crop and canopy,” Hoppes said. “He knows he’s in a cooler site, and he’s patient. He has a lot of wisdom, and he’s not one to panic. He just lets things get ripe.”

Hoppes said Boushey loves the winemaking side of the business, and that helps make him a superior grower.

“More than any other grower, Dick understands wine,” Hoppes said. “He drinks wine. He has a different perspective than other people. He’s pretty dialed in on the wine side.”

Boushey has been a home winemaker since 1975, and he loves sitting in on blending sessions with winemakers.

“That’s really helped me to be a better grower,” Boushey said. “I understand the chemistry. That’s why I like working with the winemaker – you can go back and tweak things in the vineyard.”

So might there be a Boushey Winery one day? The thought crosses his mind constantly.

Plus, Boushey loves what he does now.

“I’m going to farm until I fall off the tractor.”