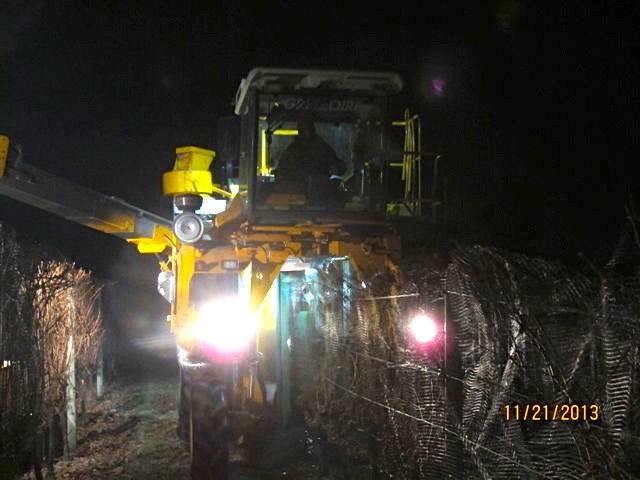 Record-breaking low temperatures in portions of the Pacific Northwest made it a hot time for the picking grapes for ice wine this week.

On Thursday morning, Ste. Michelle Wine Estates harvested and began crushing grapes for the syrupy nectar at Columbia Crest in Paterson, Wash., after temperatures in the Horse Heaven Hills dipped to 10 degrees. 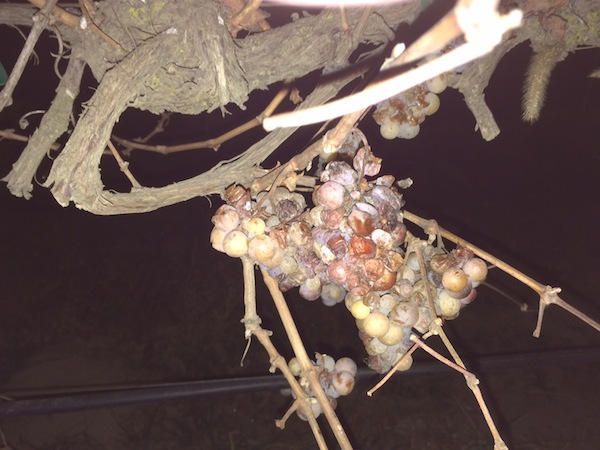 Frozen berries of Riesling on the vine are about to be picked early Thursday, Nov. 21, 2013, near Paterson, Wash. (Photo courtesy of Ste. Michelle Wine Estates)

It began a day earlier in British Columbia’s Okanagan Valley, where conditions made for one of the earliest harvest of government-approved ice wine. It came during the same vintage that saw picking begin Aug. 27 — the province’s earliest harvest of vinifera on record.

Lindsay Kelm, communications manager for the B.C. Wine Institute, said Little Straw Vineyards in West Kelowna was the first in the province to pick for ice wine. It began to harvest frozen Auxerrois and Lemberger grapes just before at 7 a.m. Wednesday, soon after temperatures dropped to minus-10.

Kelm said 29 wineries have made plans to produce ice wine from the 2013 vintage. With the early harvest, the projected harvest record of 1,000 tons of fruit for ice wine has a better chance to coming true. The institute reported 624 tons of ice wine grapes had been harvested after picks on Wednesday night and Thursday night.

The harvest of ice wine is monitored by the Canadian government, which certifies that picking for ice wine must take place in conditions at or below minus-9 Celsius (16 degrees Fahrenheit). Consumers can expect to pay more than twice as much for a bottle ice wine vs. a bottle of late harvest wine.

Temperatures in Oliver dipped to minus-10 by 7 p.m. Wednesday, and picking began at 12:45 a.m. Thursday in Whitetail Vineyard. The low temperature Thursday reached minus-12 Celsius.

Whitetail Vineyard, a 200-acre site planted in 2003, is just north of Oroville, Wash., and the Canadian lake resort town of Osoyoos.  Harvest took four hours by machine, and each winery received 7 tons of Riesling with a sugar level of 45 brix.

“Picking exceptionally early like this is the icing on the cake for what has been a stellar year,” Osborne said in a news release. “A hot dry summer combined with this earlier than normal arctic outflow has given us icewine grapes in outstanding condition. An added benefit from harvesting icewine in November is the nice quantity, as we don’t lose as near as much to wildlife and birds.”

Winemakers said crop loss can be as much as 25 percent for each month the dessert grapes hang on the vine after November.