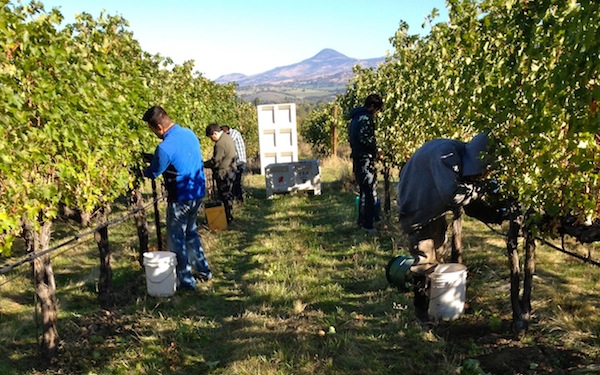 The weather outlook for the first 10 days of October bodes well for the Pacific Northwest wine industry as many vineyards enter the home stretch of harvest and winemakers focus more of their attention on fermentations rather than crush.

“As we move into October and completing the harvest period, the general flow of the atmosphere has not changed significantly, however, shorter days and lower sun angle are bringing nighttime temperatures down,” reported renowned climatologist Greg Jones, a professor at Southern Oregon University in Ashland. “Current short term forecasts are pointing to mild conditions over the West, but little to no rain for the foreseeable future (at least into the middle to end of next week).”

The forecast for the Columbia Valley matches that, according to Gerrit Hoogenboom, director and professor of agrometeorology at Washington State University. His forecast through Oct. 10 is available at the school’s AgWeatherNet.

“Late summer-like conditions are expected for much of the outlook period, as a ridge of high pressure assumes residence over the Northwest,” Hoogenboom wrote. “Aside from some clouds, and perhaps some light rain clipping the north coast at times, mainly sunny and benign weather is likely through at least early next week. Temperatures in the east should peak around Monday, when many areas could reach into the low 80s. Later in the period, a very weak system may pass through Washington, although its effects should be minimal. Despite a degree of cooling around the middle of next week, temperatures should remain above normal for the near future.”

The Climate Prediction Center indicates the current 6-10 and 8-14 day outlooks for California, Oregon and Washington are projected to stay seasonally average or above normal through at least mid-October, Jones said. Rainfall outlooks over the same time period indicate a greater likelihood of dry conditions over most of the West with some indication of continued, but subsiding, monsoon flow in the Southwest.

“In summary, all evidence continues to point to seasonally mild conditions over the next couple of weeks,” Jones predicted. “There’s the possible chance of rain for the middle to end of next week, but there’s nothing substantial on the forecast horizon.”

There are expectations for that trend to extend into November.

“The 30-day outlook through the month of October is not much different, with a greater likelihood of warmer and drier conditions along most of the West Coast with a greater chance of rain into extreme southern California from the lingering monsoon flow,” Jones predicted.

Summer of 2014 sets records in Northwest 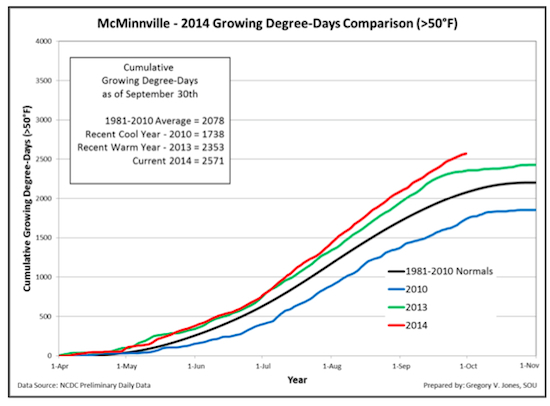 Weather data confirms what Pacific Northwest wine country believed to be true, that the summer of 2014 was the warmest of our lifetime. 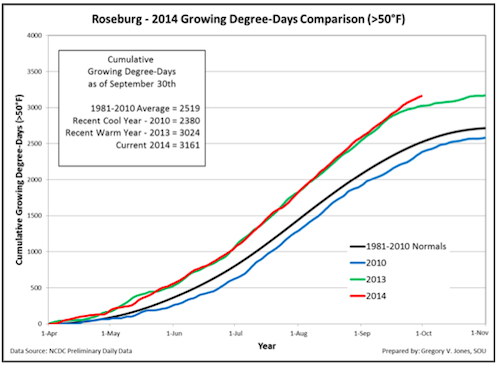 “The three-month period from July through September continued the run of warmer-than-average conditions over the western U.S.,” Jones wrote. “Much of the West has just experienced its warmest summer on record.” 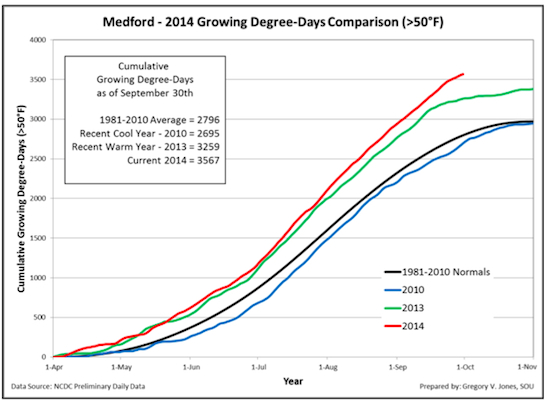 That’s especially true in Oregon wine country where Jones’ weather stations in McMinnville, Roseburg and Medford tracking growing degree days were well above the 40-year average of 1981 to 2010. 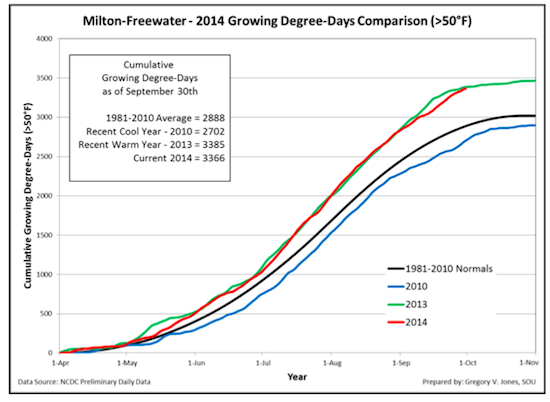 “September temperatures in Oregon continued above normal with McMinnville, Milton-Freewater, Roseburg and Medford ranging from 2.6 to 4.5°F warmer than average,” Jones wrote in his latest report to the wine industry. “The September conditions brought the 2014 growing degree-day accumulations to record numbers for three of the four locations. Degree-days are similar or above the 2013 values on this date (the same in Milton-Freewater and to 10 percent up in McMinnville and Medford). All four locations in the attached plot are running above their 2004-2013 average (11-24%) and their 1981-2010 average (17-28%) for the April through September growing season.”

A September to remember for Northwest wine industry

“While fall is clearly here with crisp nights and glorious blue skies, September 2014 has been entered into the record books in the western U.S.,” Jones wrote. “The month will be remembered both for record warmth and a single storm event that brought fall’s first precipitation … in record amounts to many areas.”

Hoogenboom wrote, “September marks the seventh consecutive month of abnormal warmth in Washington. Although last month’s heat was hardly record breaking, conditions were nonetheless appreciably warmer than normal for both the day-time and night-time periods. Locations west of the Cascades such as Mount Vernon were especially balmy, with temperatures of more than 2 degree above normal. Thus, 2014 continues the recent trend, though to a lesser degree, of unusually hot Septembers.”

West Coast temperatures were 1 to 6 degrees above normal, while most of the Midwest was cooler than normal in September, another example of why most scientists reference “global climate change” rather than “global warming.”

In September, precipitation was mixed, Jones noted, with above-normal recordings in the Puget Sound and the northern Cascades, continued moderately dry conditions in the Willamette Valley and the record-breaking rains of 1-6 inches that drenched Southern Oregon and northern California from Sept. 23-25. The Southwest felt the remnants of Hurricane Odile, which led to a rainfall totals ranging from 200 to 600 percent of normal.

“While monsoon rainfall did bring some relief to parts of the western U.S., severe-to-exceptional drought conditions continue for much of California, Oregon and parts of Washington,” he wrote.

Along the way, there were some remarkable events in Washington state. Hoogenboom pointed that Mount Vernon received 1.58 inches of rain on Sept. 2. Four days later and 225 miles to the south, Vancouver reported a high of 95 degrees.

“One of the more notable weather episodes of September was the shot of dry air that arrived during the second week of the month, and produced some chilly low temperatures on the mornings of the 11th to the 13th,” Hoogenboom reported. “On September 11th, the low at Pullman was 26 degrees, which was their coldest reading since April 13th. Increasingly unsettled conditions arrived later in September, and a slow moving front spawned 2.34 inches of rain at Tokeland on the 23rd. After a brief dry spell, rain returned to western areas on the 29th and 30th, as a fast-moving clipper-type disturbance passed through the state. Overall, September was a typically variable and relatively unremarkable weather month.”

Little chance of drought recovery in 2014

“The longer term forecast extended out to 90 days (October-November-December) from the Climate Prediction Center forecast continues the 30-day pattern … likely warm and dry,” Jones wrote. “While we will clearly get our seasonal push of storms and some rain, the chance of drought recovery does not look good right now. That could change as we move further into the winter, but no further developments in El Niño conditions in the tropical Pacific warrant significant forecast changes at this time.”

Washington State University reported a new weather station was installed on Phinny Hill in the Horse Heaven Hills north of Alderdale. The station is sponsored by Champoux Vineyard.

AgWeatherNet now had 155 reporting stations in its network.