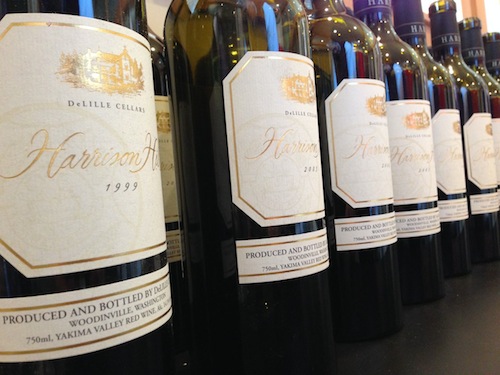 BENTON CITY, Wash. — It’s a wine rarely seen because of its small case production and premium price, and it’s a Washington classic, a Bordeaux-style red made by Chris Upchurch of DeLille Cellars.

Harrison Hill is a Cabernet Sauvignon-heavy blend crafted from a small Yakima Valley vineyard with a rich history. Of the vineyard’s 5 acres, an acre of Cabernet Sauvignon planted in 1962 remains from the earliest days of Associated Vintners, the first Washington winery to focus exclusively on wines made from premium European grape varieties.

In 1972, the Newhouse family began farming Harrison Hill for Associated Vintners, and later that decade, it purchased the land and began selling the grapes to Chateau Ste. Michelle.

In the early 1990s, Upchurch discovered the vines and talked to then-Ste. Michelle CEO Allen Shoup about taking over Harrison Hill. Shoup was excited about what DeLille could do with the grapes and handed over control of the vineyard.

In 1993, the Newhouses tore out all but the 1962 Cabernet Sauvignon vines and replanted to Cabernet Franc, Merlot and Petit Verdot. Upchurch made his first Harrison Hill bottling with the 1994 vintage, and it has been one of his favorite wines since. 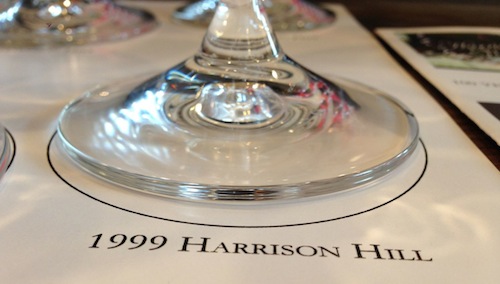 This vertical tasting of Harrison Hill started with the classic 1999 vintage, then included the 2003 through 2011 vintages. (Photo by Andy Perdue/Great Northwest Wine)

On Sunday, we had the opportunity to taste through several vintages of Harrison Hill with Upchurch at his home on Red Mountain. We started with the classic 1999 vintage, then tasted 2003 through 2011. Here are our notes:

DeLille Cellars 1999 Harrison Hill, Yakima Valley: Many consider 1999 a cool vintage with a miracle autumn that helped the grapes ripen perfectly. Upchurch remembers the cool, late spring, but he more happily recalls the even ripening from August through October that make 1999 so glorious. This wine is holding up beautifully, leading with aromas of dried cherry, pipe tobacco and minerality. On the palate, it is gorgeous, with flavors of dried cherry and ripe strawberry backed by beautiful acidity. Elegant, focused tannins make this a wine to savor. 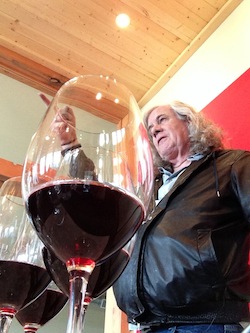 Chris Upchurch is the winemaker for DeLille Cellars and has crafted the Harrison Hill red blend each year since 1994. (Photo by Andy Perdue/Great Northwest Wine)

DeLille Cellars 2003 Harrison Hill, Yakima Valley: At 11 years old, this wine is coming into its own, though it’s still a dark, brooding and fascinating red. Aromas of sage, ripe strawberry, dried herbs and cherry pipe tobacco give way to flavors that are dark, bold and teeming with youthful intensity.

DeLille Cellars 2004 Harrison Hill, Yakima Valley: The 2004 vintage started off with a deep freeze that damaged vineyards throughout Washington’s Columbia Valley, though particularly in the Walla Walla Valley to the east. Harrison Hill, which is on a southern-facing slope, rarely has frost or freeze damage, and it certainly didn’t in 2004. This exudes aromas and flavors of sage, dried thyme and Rainier cherry. On the palate, it’s still youthful, round and luscious, backed with impressive acidity, elegant tannins and a lengthy finish.

DeLille Cellars 2005 Harrison Hill, Yakima Valley: Grown in a hot year that also witnessed a drought throughout the Columbia Valley, the 2005 Harrison Hill again benefitted from being in a cooler site, which allowed Upchurch to harvest its grapes later than just about any other site he works with. We’re starting to see a trend with this wine through the vintages, as the 2005 also reveals aromas and flavors of sage, thyme and cherry pipe tobacco, along with strawberry and ripe cherry. Bright acidity, another hallmark of Harrison Hill and its ability to age gracefully, melds with moderate tannins and impressive length.

DeLille Cellars 2006 Harrison Hill, Yakima Valley: The 2006 vintage started off poorly because of rain during the spring. But that turned into a hot summer and a long, precipitation-free harvest. Again, Harrison Hill was a beneficiary of the vintage by being in a cool area with older vines that provide perfectly balanced grapes. This is still a youthful wine, with aromas and flavors of ripe cherry, red plum, dark chocolate and a hint of smokiness dancing across the palate. The tannins are firm yet approachable and luscious.

DeLille Cellars 2007 Harrison Hill, Yakima Valley: Close to a perfect vintage for Washington, 2007 will be remembered for its long, warm summer, cooler August and ideal harvest. The result at Harrison Hill is certainly one of the best wines Upchurch has crafted – so far. Notes of strawberry, cherry and dark chocolate meld with hints of black cherry and dried sage. Firm tannins reveal themselves early on the palate, then dissolve into elegant richness through the impressive finish. It is a wine to be treasured.

DeLille Cellars 2008 Harrison Hill, Snipes Mountain: In early 2009, the federal government approved the Snipes Mountain American Viticultural Area. It is Washington’s second-smallest AVA (after Red Mountain), and while the main part of the AVA is Snipes Mountain itself, it also extends across Interstate 82 to Harrison Hill. Because this wine had not yet been bottled, Upchurch was able to legally use the Snipes Mountain designation on the label. The wine is big and bold up front, thanks to notes of plum and Bing cherry. It then resolves on the palate to notes of sweet herbs, black licorice and dark, luscious tannins.

DeLille Cellars 2009 Harrison Hill, Snipes Mountain: Harrison Hill’s grapes were brought in a few days before a historically early Oct. 10 frost that all but finished the 2009 harvest, which up to then had been gloriously warm. This was poised to be the last warm growing season until 2012. This young red shows off notes of black and red licorice, ripe dark cherry, sage and purple lavender. Its tannins are elegant yet focused through another lengthy finish. Don’t be tempted to open this quite yet. Just hide it in your cellar for another few years.

DeLille Cellars 2010 Harrison Hill, Snipes Mountain: The first of two consecutive cool vintages meant Upchurch could let his Harrison Hill Cabernet Sauvignon hang until Halloween – yet still keep his sugars below 24 brix. This is the first wine in this vertical to show any sizable tannins, but it also has the fruit to back them up. It’s a big, bold, intense red with ripe plum, dark chocolate, minerality and impressive acidity. This is only going to get more interesting.

DeLille Cellars 2011 Harrison Hill, Snipes Mountain, $85: This is the current release of Harrison Hill, and it is already sold out at the winery. Indeed, those who want to collect Harrison Hill should get on the DeLille mailing list to ensure the wines are available to them. This youthful wine is tightly wound at first, but it begins to open up after about 30 minutes. Aromas of sage, dark fruit, dark chocolate and black olive lead to flavors of blackberry, black cherry and plum. Sweet, elegant tannins lead to a lengthy finish. Tuck this wine away in your cellar for a minimum of five years.