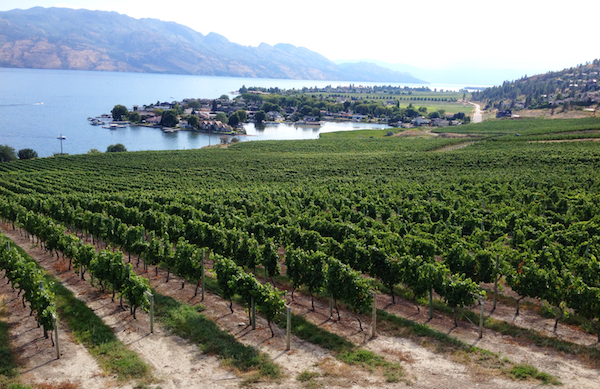 KELOWNA, British Columbia – British Columbia’s wine industry grew slowly in terms of vineyard plantings during the past three years, yet the modest 4 percent increase since 2011 is actually good news, according to the BC Wine Institute.

Last week’s report, prepared by Lynn Bremmer of Mount Kobau Wine Services in conjunction with the BC Grapegrowers Association, showed the province with 10,260 acres of wine grapes and 254 wineries.

In 2011, there were 9,854 acres of vineyards for Canada’s second-largest wine-producing region and the B.C. Vintners Quality Alliance program. Nine years ago, there were 6,632 acres of wine grapes and 118 wineries.

“The 2014 acreage report is a testament to the British Columbia wine industry’s commitment to producing quality wines rather than to increasing volume of wine,” Miles Prodan, BC Wine Institute President/CEO, said in a news release. “This focus on the continual improvement in the quality of the wines of British Columbia can be measured in the record level of BC VQA market share here in BC and the overwhelming recognition in international competitions. Overall, this evidence demonstrates a definite maturity of our local industry and its evolution as a global wine producing region.”

British Columbia trails Ontario (17,000 acres) in terms of vineyards, but Ontario has 19 fewer wineries. To place British Columbia in perspective among its Pacific Northwest neighbors, Washington state has planted more than 50,000 acres, with Oregon surpassing 22,000 acres. Idaho remains at about 1,200 acres.

The previous BC grape acreage report — generated in 2011 — showed a vineyard growth of 8.7 percent over 2008, and double-digit growth in the preceding six years. The number of vineyards has grown to 929 in 2014, an increase of 65 vineyards in the past three years, with 67 percent of the acreage winery-owned or leased. It will be several months before the BCWI completes its crop report from the 2014 vintage, but the 2013 data published by BDO Canada showed a record 31,383 tons crushed last year — a 15 percent increase over the 2012 harvest.

“Harvest tonnage continues to increase in some of BC’s earlier-established vineyards due to the maturation of vines re-planted three to four years ago, after hard frosts in 2008 and 2009,” said Manfred Freese, President of the BC Grapegrowers Association. “These plants are finally able to produce the normal quantities of fruit.”

While they weren’t cited in the report, land scarcity and economics in the Okanagan Valley — the source for 84 percent of the province’s wine grapes — also factor into the slowing of plantings. The region continues to serve as one of Canada’s destinations for vacation and retirement property, and parcels with a potential for vines are being purchased for residential use. Prime vineyard land in wine country can fetch north of $100,000 per acre. A recent example is a listing for 19 acres of orchard near Kelowna with an asking price of $1.52 million.

Two noble varieties that are so important to the Washington state wine industry are down on the list in British Columbia. Cabernet Sauvignon vines are a distant fifth at 755 acres, while Riesling ranks No. 9 at 511 acres.

Last week’s report also showed a growing interest in Muscat, a reflection of industry’s desire to slake consumers’ recent thirst for Moscato. In 2011, there were 59 acres of Muscat vines planted. This year, Muscats represented 90 acres, moving from 11th to eighth among the plantings of white varieties during the past three years. 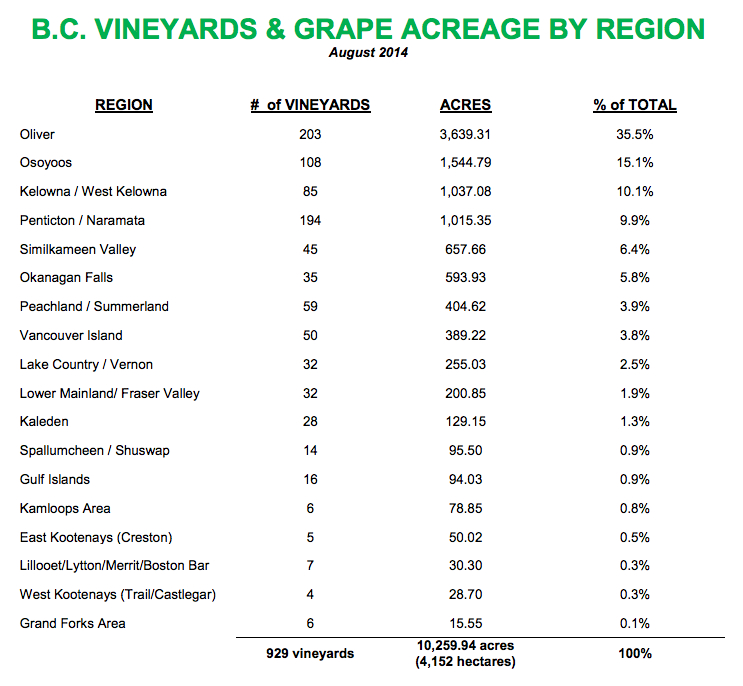 The Okanagan Valley region of Oliver affirmed its unofficial claim as “The Wine Capital of Canada” in the acreage report. There are 203 vineyards in the Oliver region, accounting for 3,639 acres — nearly 36 percent of province’s vineyards. Osoyoos, just across the border from Oroville, Wash., is next with 108 sites and 1,545 acres.

The proposed Golden Mile Bench Designated Viticultural Area is just south of the town of Oliver and would be the province’s first sub-appellation.

Data gathering for the report, which encompasses an estimated 95 percent of the industry, ended in July 2014 and includes last spring’s plantings. Funding for the study was provided by Agri-Food Canada, the BC Ministry of Agriculture via the Investment Agriculture Foundation, the BC Grapegrowers Association, the BC Wine Grape Council and the BC Wine Institute.

The BCWI represents 134 member wineries, supports and markets wines produced under VQA standards, which certifies those wines are made entirely with BC grapes. BCWI membership represents 95 percent of total grape wine sales. The institute also serves as an advocate in government issues.