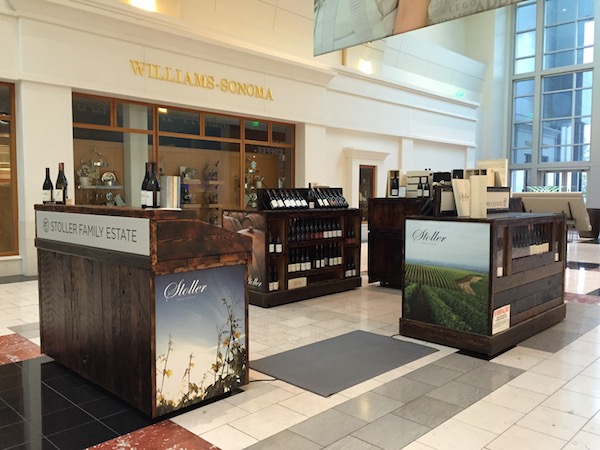 PORTLAND, Ore. — Starting today, Stoller Family Estate will sell Oregon wine at Washington Square, and the Dundee Hills winery couldn’t be happier with its unique opportunity and prime location inside one of the Pacific Northwest’s largest shopping centers.

“During the holidays, it’s harder to get out to wine country, so we’re going to bring the tasting room experience to Washington Square,” Gary Mortensen, president of Stoller Family Estate, told Great Northwest Wine. “We’ll be right there by Williams-Sonoma and Nordstrom, so it should be a good fit with good synergy.”

Thomas Randall, senior property manager for Washington Square, said in a statement issued through Stoller, “We are always focused on how we can enhance the center and bring new energy to our merchandise mix. The addition of an award-winning vineyard will certainly complement Washington Square’s retailer mix and offer guests greater selection at the shopping center.”

While the Stoller kiosk breaks ground for a winery at Washington Square, it is not the first for Macerich, a company based in Santa Monica, Calif., that manages 60 shopping centers nationwide.

Last year, Scottsdale (Ariz.) Fashion Square launched V95 Wine Lounge and Coffee Bar, which serves and sells wine. Randall described V95 as an example of an “emerging trend in the retail industry.” That would indicate the possibility of a long-term wine presence at Washington Square, perhaps with Stoller.

“The agreement is through the end of the year,” Mortensen said. “If things continue as we hope, who knows? We’ll need to see how it goes.”

Parameters developed by the shopping center and Stoller will discourage loitering, and there won’t be long lines of patrons waiting to pay a tasting fee or going through a flight of wine.

“We will be featuring just one wine each day, and we can provide one free sample of half-ounces,” Mortensen said. “That makes it really easy to manage.”

Stoller’s hours will be consistent with the mall’s regular opening and closing times. When it comes to late-night holiday shopping events, the kiosks are not required to be open during those hours, Mortensen said, and Stoller must close in accordance with Oregon Liquor Control Commission regulations. 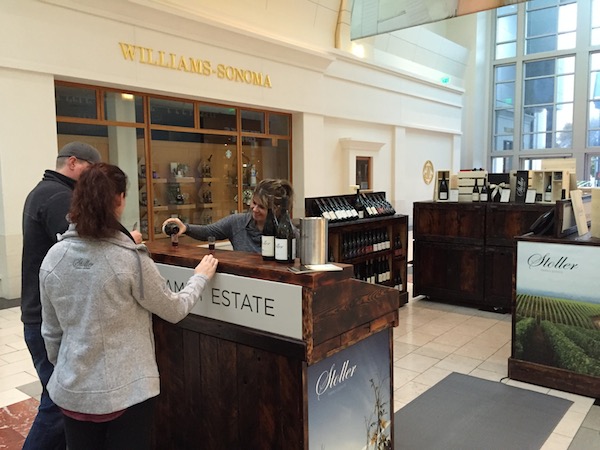 Stoller’s kiosk is 10 feet by 10 feet, and the diagram had to be approved by Macerich officials, Mortensen said.

“They don’t want to see a big giant clown with wine coming out of its mouth,” Mortensen deadpanned. “But they seem really excited about it.”

Stoller worked closely with the OLCC on its license for a second tasting room — a first for Stoller — and city of Tigard officials, Mortensen said.

“There’s a lot of learning to do at the end of the day because of not having done it before or knowing anyone else who has, but it’s a cool opportunity to extend the brand beyond the tasting room,” Mortensen said. “We’ll see how people react to it.” 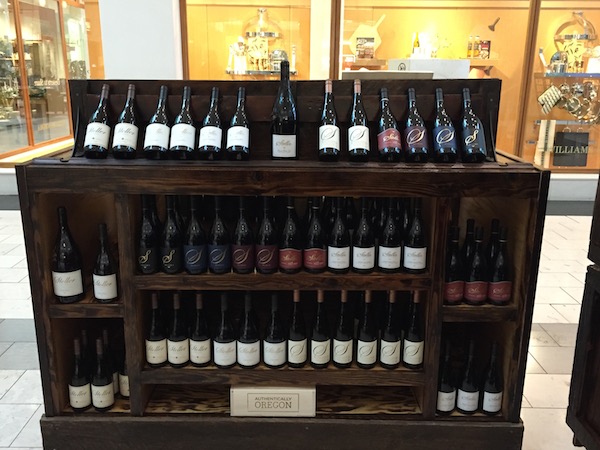 The initial move and setup of the kiosk began at 6 a.m. Saturday. Winery staff built the kiosk, which features touches of farm wood in keeping with the image founder/owner Bill Stoller created for his winery at the erstwhile turkey farm he was raised on. Now, it’s a veritable portable tasting room that could be used for other projects, Mortensen said.

“We will feature our Legacy tier, our reserves and our Single Acre wines,” Mortensen said. “We’ll also have some large-format bottles, some older vintages, special gift boxes and other nice packages. We’re really trying to bring a lot of the things you can’t find in stores and can only get in our tasting room — things that should make for really good gift-giving ideas during the holiday season.”

Only members of Stoller’s team will operate the kiosk.

“For those people who have been out to Stoller, they will see a lot of familiar faces at the kiosk,” he said.

There will also be large, high-definition photographs of the 190-acre vineyard, winemaker Melissa Burr and vineyard manager Rob Schultz. Those shoppers visiting the Stoller kiosk looking for apparel or other types of merchandise will be disappointed.

“We will keep the focus on the wine,” he said. 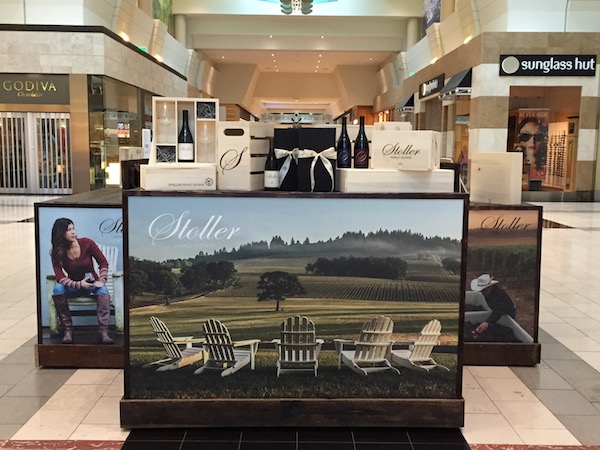 A brainstorming idea that began with a notion of Stoller participating in a Black Friday event soon gathered momentum, Mortensen said.

“One of our guys, James Falvey, who heads up business development, heard that Washington Square might be looking for a winery presence, so we just jumped in,” Mortensen said. “We like to be fairly entrepreneurial and find new things and push the envelope.”

Mortensen, who returned the Oregon wine industry in March 2012 when Stoller hired him to manage the winery, said the kiosk project has been fun in part because of the complexities and the synergy it inspired throughout the LEED Gold certified winery and Salmon-Safe vineyard.

“It was just exciting for us,” he said. “It was a unique opportunity, and everybody on the team was coming together and saying, ‘Let’s do this.’ And what was cool for me is that the brand is so well thought of that Washington Square was telling us, ‘You guys are perfect.’ We are really honored to be that winery.“

The new kiosk will cap a remarkable year for Stoller. Burr’s long list of award-winning wines in 2013 prompted Wine Press Northwest magazine to name Stoller as its 2014 Pacific Northwest Winery of the Year. Stoller also played host to the Oregon Chardonnay Symposium and the Summertime Salud! Big Dinner, a fundraiser to support healthcare for seasonal vineyard workers.

“And we’ve been done picking since the third week in September,” Mortensen said. “What a compressed harvest and what a great harvest. The fruit looks fabulous.”