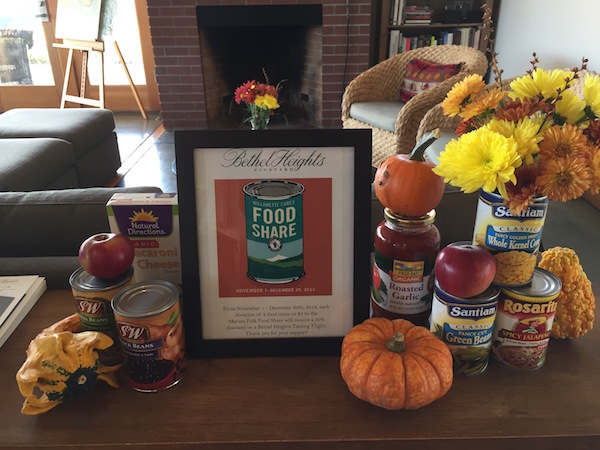 Wine Yakima Valley partners with Northwest Harvest — a statewide hunger relief agency — to help feed those who are struggling. Participating tasting rooms during the Thanksgiving weekend will feature a Thanksgiving in Wine Country Taste to Fight Hunger donation box.

For example, Gilbert Cellars in Yakima plans to donate all proceeds from its featured tastings to the Taste to Fight Hunger campaign. Knight Hill in Zillah has earmarked proceeds from the sales of its Syrah jelly to Northwest Harvest. In Benton City, Terra Blanca will be among those Red Mountain wineries to set up the Taste to Fight Hunger collection box.

Of course, food and wine pairings will be a theme at many Yakima Valley wineries. On Saturday, Dineen Vineyards features Chris Guerra of Guerra’s Gourmet who will be baking fresh tamales and Neopolitan-style pizza in its wood-fired oven. Red Mountain’s Tapteil Vineyard Winery includes samples of imported olive oils, balsamic vinegars and gourmet salts alongside their wines.

Lake Chelan Wine Valley will kick off the holiday season with a weekend of barrel tasting as wine lovers can explore the influence of oak in wine at the 21 member wineries near the shores of the 51-mile lake. Among the more provocative tastings scheduled include the Cairdeas Winery 2014 Port-style Petite Sirah, Lake Chelan Winery 2013 Malbec from the the Lake Chelan American Viticultural Area and Tunnel Hill Winery’s 2013 Estate Pinot Noir.

Woodinville Wine Country is gearing up for its annual St. Nick’s Holiday Tasting festival next weekend, but several of its wineries have scheduled Thanksgiving weekend events, including Efeste, which will celebrate Small Business Saturday by offering logo corkscrews and foil cutters with qualifying purchases and linking with American Express’ Shop Small money-back campaign. 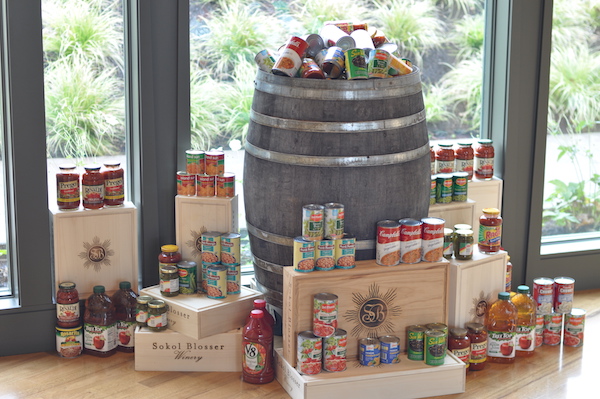 There are more than 600 wineries in Oregon, but most of them are small Willamette Valley producers devoted to the pursuit of Pinot Noir. These grapes are difficult to grow, and the wines are expensive to make. They also are often produced in small quantities, and while many of the wineries don’t have regular tasting room hours, most of the Willamette Valley wineries open their doors on two weekends each year — the three days surrounding both Memorial Day and Thanksgiving.

This weekend, Willamette Valley Wineries Association and its 205 winery/tasting room members will be open, and nearly half of them are participating in the inaugural Willamette Cares Food Share food drive. 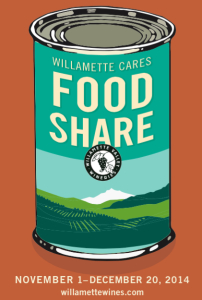 The program began Nov. 1 and concludes Dec. 20 with a goal of delivering 200,000 pounds of of non-perishable food to the statewide Oregon Food Bank. Participating wineries are offering incentives such as discounted tastings, raffle tickets and special pricing to those making a donation on behalf of Willamette Cares Food Share.

“Tasters traveling through the Willamette Valley for Wine Country Thanksgiving will be able to donate food and make cash contributions at over 80 wineries,” Sue Horstmann, executive director of the Willamette Valley Wineries Association, said in a news release. “Visitors are invited to help give back to the community during the food drive, representing an exciting collaboration between wineries to support a cause that is important to us all.”

Among those participating wineries is Duck Pond Cellars in Dundee, which uses the weekend to roll out several of its new Pinot Noirs, including its Conservation Cuvée that raises money for the Oregon Department of Fish and Wildlife.

The Columbia Gorge Winegrowers Association celebrates its 10th anniversary as an AVA with its Thanksgiving Open House Weekend, which includes a series of events spread out among its more than 30 members. They refer to their weekend of nonprofit support as Gorge Wine Gives Back, and wineries promote causes ranging from fighting domestic violence and hunger, donations of clothing for homeless shelters, fundraising for hospice and donations of food and toys for the Humane Society.

A number of Southern Oregon wineries also are using the Thanksgiving weekend to help others. Abacela’s annual Open House Celebration will give visitors the opportunity to leave donations to Toys for Tots. The Elkton Oregon AVA group also is using the weekend to support the local food bank and promote Small Business Saturday, led by Brandborg Vineyard & Winery with its new wood-fired pizza oven and growlers of its 2014 Nouveau.

Bitner Vineyards in Caldwell, Idaho, spans 16 acres and sells most of its fruit to Koenig Vineyards and Fujishin Family Cellars. (Photo by Eric Degerman/Great Northwest Wine)

More than 20 Idaho wineries — representing nearly half of the state’s industry — will be open during Thanksgiving weekend. The Idaho Wine Commission promotes it as a fun way to show off the Snake River Valley and Idaho Panhandle to family and friends. All Idaho wineries are closed Thanksgiving Day, and tasting fees apply at nearly every winery.

Bitner Vineyards is providing appetizers and on Black Friday, the purchase one case of reds at full price will include one case of Chardonnay at no cost. Fujishin Family Cellars will offer complimentary soup from the nearby Orchard House Restaurant, releases of library wines and introduce its growler program to “keep weeknight wine on your table and help keep wine bottles out of the landfill.”

Hat Ranch Winery will be celebrating the birthday of winemaker/co-owner Tim Harless on Black Friday with wine, cheese and birthday cake. Koenig Vineyards serves up complimentary housemade soup along with new releases of its award-winning lineup. Hells Canyon Winery and Zhoo Zhoo stages its annual wine sale and holiday open house to feature new release wines and older vintages. Huston Vineyards offers pairings of three finished wines and small bites, along with samples from the 2014 vintage. Williamson Orchards & Vineyards will be open all three afternoons for barrel tasting, music, cheese and chocolate.

In nearby Kuna, Indian Creek Winery will be releasing its 2012 Primitivo and offering wine samples, music, appetizers, photo booth and barrel tastings with winemaker Mike McClure. The local Humane Society will receive 50 percent of tasting fees collected during the weekend.

In the Boise suburb of Garden City, Cinder, Coiled and Telaya offer barrel tastings with all three winemakers. The mezzanine level features Surel’s Other Place art gallery and kids’ interactive art station. Cost is $15 per person, but wine club members are admitted free. Around the corner, Split Rail Winery will be open Friday and Saturday for light appetizers and barrel tastings.

Award-winning Fraser Vineyards is winding down production as owner Bev Fraser moves toward retirement, but she will be open Saturday and Sunday in downtown Boise for barrel tastings with bread, cheese and chocolate pairings. Mouvance Winery celebrates Black Friday with a happy hour promotion all day with $5 glass pours of selected wines. On Saturday, its open house features Oregon Pinot Noirs with food pairings and holiday discounts.

Angie Shaltry’s Périple Wines has moved into the University of Idaho incubator complex in Caldwell, and the chemist will offer barrel tastings of her Idaho wines as well as her Russian River Valley Pinot Noir, paired with items from Dream Chocolate.

Potter Wines will be open only on Black Friday and will provide free tastings of its Syrah and Riesling as well as its pumpkin and jalapeno wines.

Snake River Winery winemaker Scott DeSeelhorst is scheduled to pour at his acclaimed 75-acre Arena Valley Vineyard near Parma, providing barrel samples, while offering food and wine for purchase. 3 Horse Ranch Vineyards will provide a vertical tasting its Cabernet Sauvignon — made by Greg Koenig — and paired with fruit and cheese.

In the Idaho Panhandle, Pend d’Oreille Winery in Sandpoint puts on its annual holiday barrel tasting at its vinification facility in a converted airplane hangar on the road to Schweitzer Mountain. Reservations are required.