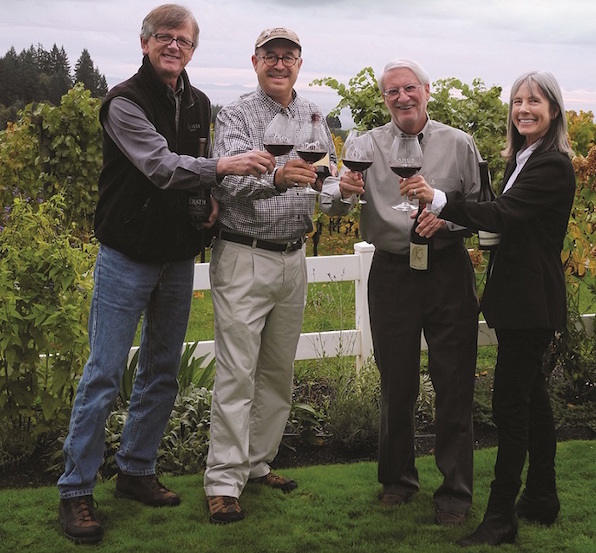 Another version of Snowmaggedon is forecast to smother the East Coast, but a group of Oregon Pinot Noir producers hopes the weather this week won’t get in the way of the Oregon Pinot Camp it has scheduled Wednesday in New Hampshire.

“They are expecting one to three feet of snow,” said Howard Rossbach, founder and president of Firesteed Cellars in Rickreall, Ore. “I doubt there will be any four-wheel drive vehicles left at the airport, so I’m hoping that once I get to the hotel that I won’t have to drive anywhere.”

Rossbach will join David Adelsheim, co-founder and president of Adelsheim Vineyard in Newberg; Wendy Lange, co-founder of Lange Estate Winery and Vineyards in Dundee; and Gary Horner, senior winemaker at Erath Winery in Dundee to spearhead a seminar in Amherst, N.H.

“Every year, the New Hampshire Liquor Commission does a series of promotional events the last week in January, and they invited us to represent Oregon and be the featured wineries for this event,” Rossbach told Great Northwest Wine. “We were asked to put on a minor Oregon Pinot Camp. In Oregon, it’s a three- or four-day event, but we’ll be doing this in about two hours.”

It’s a concept, Rossbach said, inspired by Nicole Brassard Jordan. The NHLC wine marketing specialist is a convert after having attended Oregon Pinot Camp in the Willamette Valley.

Sales of domestic Pinot Noir on rise in New Hampshire

Willakia Vineyard is an estate vineyard for Erath Winery in Dundee, Ore. It was planted in 2001. (Photo courtesy of Erath Winery)

According to the NHLC, there’s growing interest in Pinot Noir among its customers. The agency reported domestic Pinot Noir sales grew by 7 percent during the past 12 months. Sales of more than 67,000 cases of Pinot Noir accounted for $10 million in NHLC revenue.

“The NH Wine Week Pinot Camp will be a first-of-its-kind event here in New Hampshire, and it provides an incredible opportunity for wine lovers to learn about and taste this exciting variety from one of the most famous winemaking regions in the world,” Brassard Jordan said in a news release. “The Willamette Valley in Oregon has been compared to the world-renowned winemaking region of Burgundy in France. And best of all, guests have the chance to learn about this delicious and historic variety directly from four of Oregon’s top producers.”

In Oregon, the camp is by invitation only and limited to trade, so Rossbach and the other Oregon wineries will stage a unique version of Oregon Pinot Camp in New England for public and trade. This week’s event at LaBelle Winery in Amherst costs $40 at attend.

If successful, it could lead to more road shows by Oregon Pinot Noir producers. Regardless, it serves as a prime example of how inspirational Oregon Pinot Camp can be, Rossbach said.

“Nicole had never seen what Oregon and the Northwest was all about,” Rossbach said. “I think after three or four days in Oregon, she was blown away not only by content of information but by the intensely collaborative spirit of the Oregon wine industry. She wanted to bring some of the experience she had back to New Hampshire.”

Joining them from Oregon will be Rob Stuart of R. Stuart Winery in McMinnville, as well as Scott and Lisa Jenkins, part of the Fries family which owns Duck Pond Cellars in Dundee and Desert Wind Winery in Prosser, Wash.

“Our distributor — Perfecta — organized our involvement,” Lisa Jenkins said via e-mail. “We have been working with them for more than 10 years. They are a great partner and really working to see our business thrive in the state.”

inot Camp serves as just a piece of New Hampshire Wine Week, which includes the 12th annual Winter Wine Spectacular. That celebration on Thursday is billed as the largest wine event in northern New England with more 60 wine personalities, 1,500 wines, a silent auction and food from some of New Hampshire’s top restaurants.

“In the two hours of Pinot Camp, we will not be able to state massive amounts about the Oregon wine industry, but we hope to get them to think about Oregon wine and want to learn more,” Rossbach. “And we hope to get more trade to come to Pinot Camp and consumers to come out to Oregon on vacation and buy more Oregon wine.”