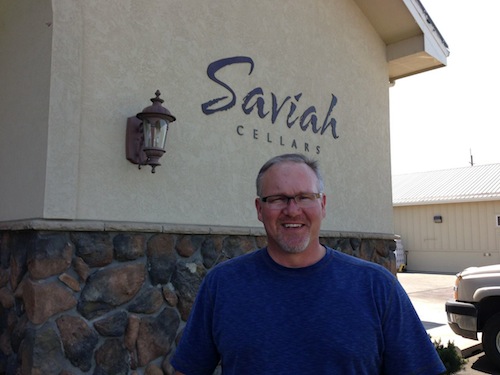 WALLA WALLA, Wash. – Montana is not an easy place to grow up. Harsh winters thicken the skin and harden the resolve. Compared with living in northern Montana, winemaking is pretty easy.

Richard Funk, who grew up in northwestern Montana and fermented his way through Montana State University in Bozeman, arrived with his wife, Anita, in the Walla Walla Valley with dreams of starting a microbrewery. But like so many before and since, once he was bitten by the wine bug, that was the inevitable path his life would take.

The Funks own Saviah Cellars, one of the finest wineries in the Walla Walla Valley, a region that is littered with some of the most glittering lights of the Pacific Northwest wine industry.

We recently had the chance to sit down with Rich Funk and talk about many aspects of his winemaking prowess and passion – including Pinot Noir. Here’s the interview:

From the health department to Saviah Cellars 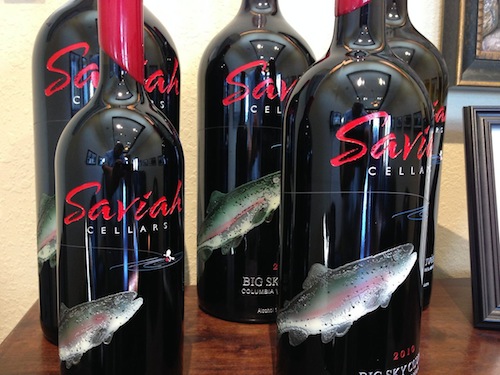 Rich Funk grew up in Montana, and his popular Big Sky Cuvee is a nod to his fond memories of the Treasure State. (Photo by Andy Perdue/Great Northwest Wine)

When Funk arrived in the Walla Walla Valley in 1991, he was an environmental health specialist for Walla Walla County, but a future in wine appeared to be in the cards, as he found himself sharing an office with Darcey Fugman-Small, wife of winemaker Rick Small and co-owner of famed Woodward Canyon Winery.

“I’d ask questions and really saw myself at some point getting into the wine industry,” Funk told Great Northwest Wine. “The more I talked to these folks, the more I realized this was something my wife and I could probably do. We didn’t have much money, but we saved every penny.”

“Mike was a dear friend of mine,” he said. “I knew Mike for 10 years before I started the winery. He was the guy who inspired me to really go with it.”

For Funk’s first two vintages, Paul rented space to launch Saviah. In the ensuing years, Funk has “paid it forward,” helping no fewer than 10 wineries to start up under his roof.

Paul never got very big, only making a few hundred cases of wine per year. As such, he never received the fame that came to Leonetti, Woodward Canyon, L’Ecole, Seven Hills or any of the other early producers of the 1970s and ’80s.

When the Funks launched Saviah Cellars in 2000, they named it after Anita’s great-grandmother, Saviah Hutchins, who had written an inspirational book called The Gift of Little Things. Saviah was married to Jack Hutchins in 1911, and the Funks later named their value-priced wines The Jack in his honor.

Saviah on the south end 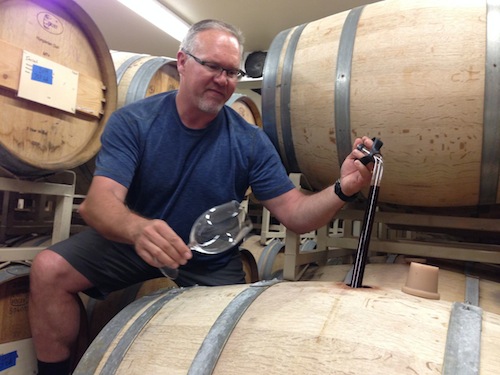 Saviah is just north of the Oregon border, in one of the few touring areas where wine lovers can find vineyards in the Walla Walla Valley. Today, the region is populated by such wineries as Pepper Bridge, Sleight of Hand, Beresan, Northstar and others. But when the Funks arrived, this area of the valley – only 10 minutes south of downtown – was lonely.

In fact, the Funks originally were looking west of town in the town of Lowden, near L’Ecole No. 41 and Woodward Canyon. But when they heard that Northstar was going to buy land south of town, they decided to gamble.

“When I first moved out here, we were the only tasting room open,” Funk said. “Pepper Bridge said, ‘We’re not going to do a tasting room out here,’ and I was thinking this could be a rocky start. Then Northstar came in and opened a tasting room. Basel, Isenhower, Rulo and then Pepper Bridge decided to do one after all, and we ended up with this beautiful little cluster out here, and it’s been nice.”

The Walla Walla Valley is relatively cool compared with other viticultural areas to the west such as the Horse Heaven Hills, Red Mountain and the Wahluke Slope, and it is regularly subjected to killing frosts and freezes that can swallow up otherwise healthy vineyards. All of this played on Funk’s mind in the early days.

“There were mornings I drove out here and went, ‘What if these vineyards froze out and there were no vines?’ The pioneering stages of viticulture in Washington were you’d see a vineyard go in, and then it would go out. People either planted the wrong thing in the wrong place or Mother Nature had just pushed you into submission.”

As it turned out, 2004 was a particularly bad year in the valley, when three-fourths of the vineyards were damaged.

“Those first five years of launching a winery are tough anyway, and then when Mother Nature scares you with one of those Arctic blasters, you start thinking,” he said. “But we just kept pressing on and keeping our nose to the grindstone and paying as we went.” 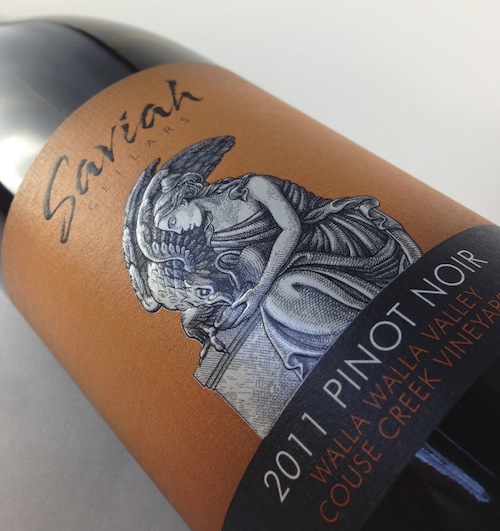 Funk’s wines have been met with critical and commercial success since his early days. This has been in great evidence the past two years during the Great Northwest Wine Competition, which is conducted at the Columbia Gorge Hotel.

“It’s always an honor to receive a medal at one of these competitions,” Funk said. “But to get best of show or a gold really means a lot to me. We celebrate these events.”

Funk credits The Jack series with his success.

“The best part of The Jack is it’s made the same way we make all of our wines,” he said. “It’s done in small barriques, hand-picked fruit. And what it allows us to do is cherry pick so we can put nearly reserve wines in all of our upper-tier wines. And The Jack is a great bottle of wine.”

The Jack spends less time in oak, is bottled under a screwcap and goes to market more quickly than the Saviah wines.

“The Jack has continued to allow us to elevate our quality,” he said.

“This is a 30-year-old vineyard up Couse Creek,” Funk said. “Rick Small used to work with the fruit years ago, and I had the good fortune in ’11 of getting my hands on 3 tons of the fruit.”

That was fortuitous because the historically cool 2011 vintage was perfect for growing Pinot Noir in the Walla Walla Valley.

“We got plenty of ripeness without things getting overripe,” Funk said.

He made another in 2013 – a historically warm vintage – that is much different but decidedly Pinot Noir in style. And all of this success has Funk searching for the perfect site for a new Pinot Noir vineyard. The Couse Creek Vineyard sits at 1,900 feet in the foothills of the Blue Mountains – just below the 2,000-foot-level that is the top of the Walla Walla Valley American Viticultural Area. As such, Funk finds himself on his computer using Google Earth to check out south-facing ridges that sit between 1,500 and 2,000 feet in elevation.

“My goal is to find someone who will either lease or sell me some acreage in those foothills where I can do something cool,” he said. “I think we have some potential in this valley to do a great Chardonnay and to do a great Pinot Noir and to do some of these varieties that need a little cooler climate.”

Saviah on The Rocks 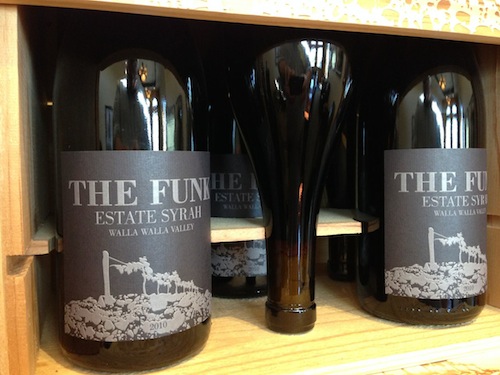 “The Funk” was not Rich Funk’s first choice for this wine from his vineyard in The Rocks District. (Photo by Andy Perdue/Great Northwest Wine)

Speaking of cooler climates, Funk has been fascinated with The Rocks District of Milton-Freewater for 15 years – ever since he tasted his first bottle of Syrah from Cayuse Vineyards.

“The Rocks captured my enthusiasm back in 2000, when I was first starting,” Funk said. “I was just smitten by this wine. In the back of my mind, I thought, ‘Wouldn’t it be cool if some day I could have a vineyard on those rocks?’ ”

That opportunity came in 2006, when the Funks bought 10 acres. They planted the first 5 acres of Funk Estate Vineyard in 2007 and plan to plant the next 5 acres next year. They also picked up a 35-year lease on a former cherry orchard adjacent to Christophe Baron’s estate vineyard in The Rocks District – which became an official AVA this winter.

The vineyard will be called “The Stones Speak.”

Funk might just have the best name for a wine from The Rocks District: It’s called The Funk. But it isn’t a name that comes easily to its owner. As a boy, Funk was picked on by other kids for his last name.

“I ended up in the principal’s office quite a bit,” he said ruefully.

So even though the name would fit perfectly on the reds from The Rocks District because they show funky aromas and flavors that are more like a delicatessen than a farmers market, Funk was reticent to go in that direction because of those painful childhood memories. Finally, his neighbor and good friend talked him into it.

“Trey Busch (owner of Sleight of Hand Cellars) finally convinced me that I should probably use it – or he was going to.”