Anthony’s at Coeur d’Alene will be the first in Idaho and the 30th restaurant in the Pacific Northwest for the group based in Kirkland, Wash. (Illustration by Miller Stauffer Architects/Courtesy of Anthony’s Restaurants)

KIRKLAND, Wash. — Anthony’s Restaurants, one of the Pacific Northwest’s biggest supporters of regional wine, announced Monday its plan to open a restaurant next year near the Spokane River in Coeur d’Alene, Idaho.

The Lake City restaurant will mark the Kirkland-based group’s entry into the Idaho market. Groundbreaking at the Riverstone development is scheduled for August, with a goal of opening in June 2016.

“We are all very excited to be building a new restaurant in Coeur d’Alene,” Anthony’s owner Budd Gould stated in a news release. “Riverstone is a unique community that captures the feel we love for our restaurant. We are excited to bring our commitment to fresh, Northwest seafood, local wine and microbrews and the freshest seasonal produce to Idaho.”

Anthony’s operates 28 restaurants — most of them ringing the Puget Sound, as well as along the Deschutes River in Bend, Ore. Next month, the collection grows to 29 with the opening of its Budd’s Broiler steakhouse in Richland, Wash., a lob wedge away from its Anthony’s at Columbia Point.

The Coeur d’Alene restaurant will be the group’s third location in the Inland Northwest, following the picturesque Anthony’s at Spokane Falls and Anthony’s Beach Café on Spokane’s South Hill. The Riverstone site is just north of the Spokane River and the famed multi-use North Idaho Centennial Trail.

Anthony’s history begins in Bellevue in 1969 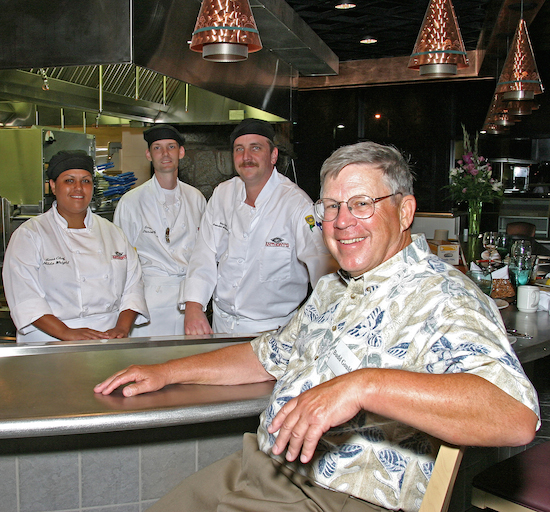 Anthony’s took home the commission’s award as Restaurant of the Year in 2004. The prior year, Lane Hoss, Anthony’s vice president of marketing and one of the West Coast’s top wine judges, received the inaugural Walter Clore Honorarium.

Anthony’s said it expects to hire a team of 80 for the Coeur d’Alene location. According to the company, more than 250 employees have been with Anthony’s more than a decade, while 70 staffers have more than 20 years of service. Anthony’s also counts 15 multigenerational families as employees, including one with three generations.

Its new restaurant in the Idaho resort city will be a 6,125-square-foot dinner house seating 150 people indoors, but it also will feature a 4,200-square-foot partially covered exterior patio with views of Riverstone Pond. It also plans to serve lunch.

“The inspiration for the design includes a subtle response to the site’s sawmill history with extensive use of exposed structural wood systems,” Monte Miller said.

The address for Anthony’s at Coeur d’Alene will be 1926 W. Riverstone Drive — which is less than two minutes from Interstate 90 off Northwest Boulevard.