WOODINVILLE, Wash. — The 28th annual Auction of Washington Wines has announced its lineup of wineries and chefs participating next month in the Picnic & Barrel Auction and Winemaker Dinner Series.

The Auction of Washington Wines, created in 1988, has raised more than $31 million, with a majority of it benefiting uncompensated care at Seattle Children’s Hospital. The auction also supports Washington State University’s viticulture and enology program.

DeLille Cellars, grower Dick Shaw and journalist Andy Perdue have been chosen as the 2015 honorees of the Auction of Washington Wines. And this year, Marty and Megan Clubb, owners of L’Ecole No. 41 Winery in Lowden, Wash., and Seattle Times Publisher Frank Blethen, and his wife, Charlene, complete their two-year terms as co-chairs.

Last year’s series of events within the Auction of Washington Wines raised a total of $1.8 million.

This year, the Auction of Washington Wines expanded the focus of its funding as proceeds will benefit three phases of the work at Seattle Children’s Hospital. Uncompensated care continues to receive funds, but efforts also will help support cancer clinical trials as well as autism.

On average, it costs $50,000 per child to go through the four phases of a cancer trial. And last year, Seattle Children’s Autism Center handled 26,076 calls and appointments for 3,680 patients. However, more than 1,000 families remain on the waiting list for help because autism is the fastest-growing developmental disability in the U.S. as 1 in 88 children are diagnosed with autism.

Those interested in volunteering at an upcoming event should contact Kira Haller at kira.haller@seattlechildrens.org. Roles needed include Class 12 wine servers, sommeliers,  greeters and picnic table movers.

The annual Picnic and Barrel Auction allows patrons to chat with Washington winemakers and bid on special releases while dining on regional appetizers from the team of chefs at Tulalip Resort Casino in Marysville.

Ticket packages start at $150 per person.

Cost for each dinner is $500 per person. 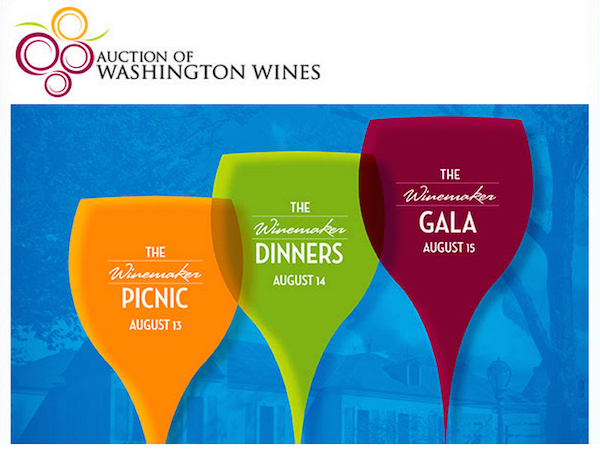 Gallo-owned Columbia Winery in Woodinville continues to play host to the start and finish of the Auction of Washington Wines’ Charity Run and Walk. Proceeds from the 10-kilometer race, 5k run/walk and Kids’ Dash help fund uncompensated care.

The event, formerly known as The Covey Run, has raised more than $300,000 since it began in 2007 when Katy Michaud served as winemaker for Covey Run Vintners.

A SIP Weekend Package includes entry to the Picnic & Barrel Auction, a winemaker dinner and the Winemaker Gala is $1,000 per person. Other packages are available.