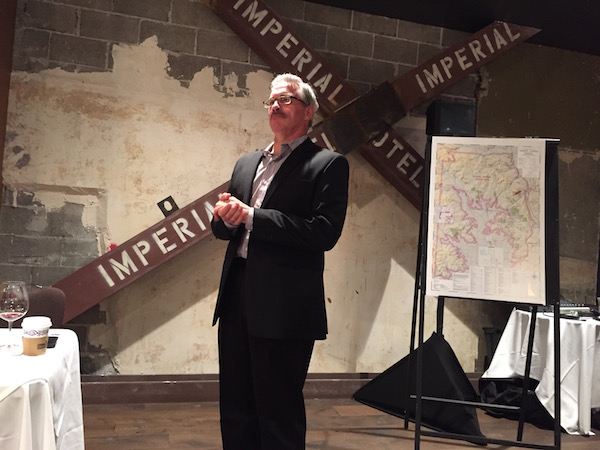 PORTLAND — It took a couple of decades, and he’s made plenty of history in between, but Tony Rynders is proud to say he’s now the winemaker for Panther Creek Cellars, a label Ken Wright created and helped Oregon Pinot Noir become famous.

“The brand is layered in Kevlar, and I’ve been given an opportunity,” Rynders told Great Northwest Wine. “Back in the day, I wanted to work at Panther Creek. It wasn’t meant to be at the time, but 20 years later …”

Twenty years ago, Rynders moved to Oregon, where he was an assistant winemaker at Argyle Winery and rooming with Dale West, Wright’s right-hand man. Within eight years, Panther Creek had become one of Oregon’s most respected wineries, yet Wright was set to start Ken Wright Cellars, so he sold the McMinnville winery in 1994.

Rynders hoped to be the one to follow in Wright’s footsteps at Panther Creek. Instead, he ended up taking a job with Hogue Cellars in Washington state. A generation later, Rynders is making wine for Panther Creek, where West recently rejoined the team in the tasting room. One of the vineyards Rynders works with is Carter Vineyard, now owned and operated by Wright.

“What’s really a trip is that two days ago when I was at the tasting room at Panther Creek introducing some of the 2013 wines, standing next to Dale, and he handed me a handwritten note by Ken to Ron Kaplan, who purchased Panther Creek, with my résumé attached from 1994,” Rynders said. “How weird is that?”

Editor’s note: This is the second of a two-part series on the progression of Panther Creek Cellars.

Bacchus brings on Rynders in time for 2013 crush 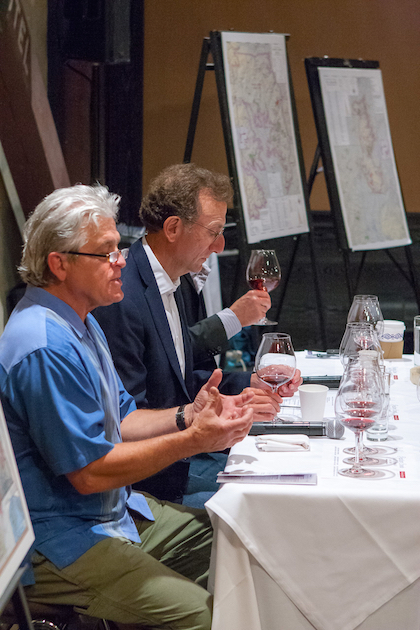 In some ways, this project appears more personal. Last month, Bacchus assembled top members of its team in downtown Portland and invited trade and media from throughout the Pacific Northwest to help celebrate the revival of Panther Creek Cellars, formally introducing Rynders as its winemaker and sampling several single-vineyard wines during a wine-themed luncheon at Imperial, operated by acclaimed chef Vitaly Paley.

“We are so proud to be involved with Panther Creek and have Tony on board as the consulting winemaker and a friend in Ken,” said Sam Bronfman, co-founder and managing partner of Bacchus Capital Management. “We want to restore Panther Creek — and I think we’re well on our way — to the highest level of Oregon Pinot Noir. We think we can do really great things to regain its status as one of the great Oregon wines.” 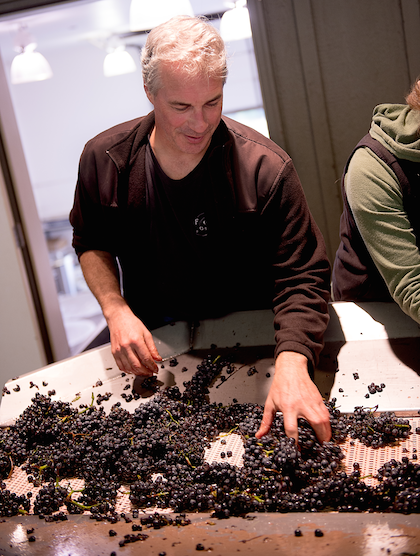 Tony Rynders returned to Oregon in 1997 to take over the winemaking at Domaine Serene for the next 10 years. (Photo courtesy of Bacchus Capital Management)

Rynders wrote a few pages of Oregon wine history with Domaine Serene in the Dundee Hills, another of the state’s great wineries Wright helped build the foundation for.

“I don’t care to do that again,” Rynders continued. “That’s not fun. It actually became un-fun for me, but we killed it. There was Sideways (in 2004) and Oregon Pinot Noir was getting cool. Who ever would have thought that Pinot Noir would be a cool grape — cool as in trendy? Who would have anticipated that? I never did.”

So in 2008, Rynders stepped back and entered the consulting world. His early clients included Swiftwater Cellars at the Cascade mountain resort Suncadia in Roslyn, Wash., and he launched his own brand, Tendril Wine Cellars. Rynders took over the reins at Panther Creek in April 2013 after being recruited by his friend Quinton Jay, who recently left Bacchus.

“Quinton was the one who told me about the opportunity, and also there was the fact that it was Panther Creek,” Rynders said. “I had a warm and fuzzy feeling about it and the relationship with Ken. I wanted to be part of this, and I felt it would be worth putting some energy into this.” 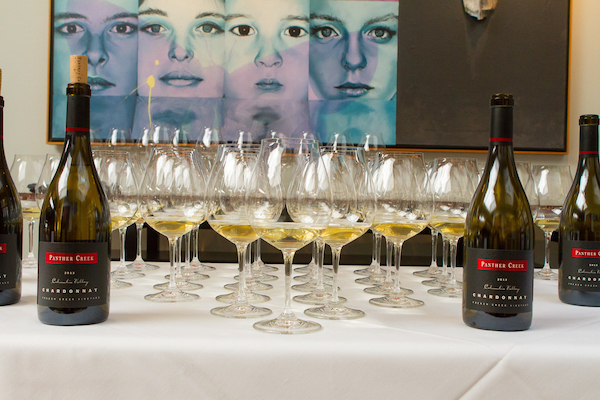 The 2013 vineyard-designate Pinot Noirs from Carter ($65), Kalita ($50) and Schindler ($50) as well as the 2013 French Creek Vineyard Chardonnay ($45) from Washington’s Yakima Valley serve as examples of the direction Bacchus is headed — a path toward national distribution and an annual production of 10,000 cases with Rynders at the wheel.

“It’s like an old, classic car,” Rynders said. “I can appreciate when the older car is restored to its former glory. It can be absolutely gorgeous. There’s some of that to this. And there’s something about the name ‘Panther Creek’ that’s still attractive to people after all these years.”

Bronfman said brand recognition is a key component as Bacchus grows its market for Panther Creek Cellars and attracts customers to the young tasting room along Highway 99 in Dundee.

“We’re no longer at the power station (in McMinnville), sorry to say, but I think we’re in a place where it’s better for customers to get to relearn Panther Creek,” Bronfman said. “And we haven’t varied the packaging. We think it’s iconic. That’s important to us.”

Officially, Rynders’ job title is consulting winemaker because he will continue to work on his own brand — Tendril — and handle custom crush for small clients via his Tour de Force Wine Co., which he orchestrates inside Laurent Montalieu’s NW Wine Company in Dundee.

In some ways, it will be easy for Rynders to keep Panther Creek separate. His preference for Tendril is on blending, while much of the focus of Panther Creek is on single-vineyard wines.

“Tony is the man,” Bronfman said. “He decides the quality of the wine. He makes the wine, and he is fully involved with the vineyard choices.

“He is our guy, and we are very proud of that,” Bronfman added. “We’ll continue to stay with Tony for as long as he’ll stay with us because he’s making great wines. And he’s a great guy.”

Bacchus to help Rynders with ‘fashion’ side of wine 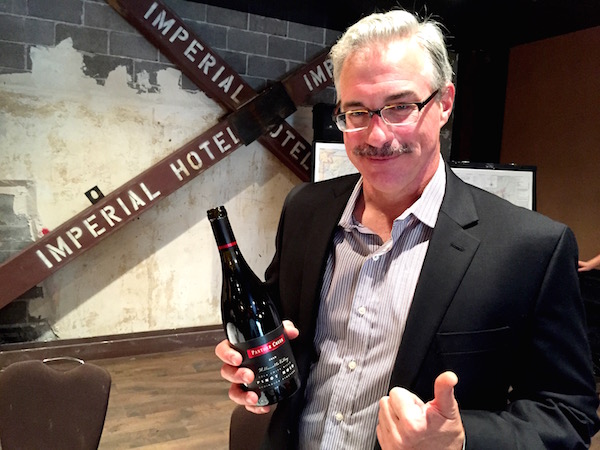 Tony Rynders has fun touting one of the 2013 single-vineyard wines he created for Panther Creek Cellars. (Photo by Eric Degerman/Great Northwest Wine)

The opportunity to associate Bacchus, complete with its financial expertise and skilled marketing team, is not lost on Rynders either.

Indeed, Rynders seems as if he’s in his element. He’s making award-winning wine in two states and renewing friendships. He can also appreciate seeing an artisan such as Paley devoting time to his craft.

“The guy is back there cooking,” Rynders said. “He’s not doing TV shows. He’s not flying around the world. That’s how you continue to keep your eye on the ball, and these are professions where you really need to have that presence, that vision, that input.”

Undoubtedly there will be some additional travel for the University of California-Davis grad as he collaborates with Bacchus on promoting the brand, but don’t expect him to him to stretch for the brass ring as far he once did.

“It made my hair turn white,” Rynders said. “Tendril is 1,000 cases, and that brand has matured. If we eclipsed 4,000 cases, I would be absolutely shocked.”

And then there are his two children.

Besides, he wants to take his time with Panther Creek Cellars and make Wright and Bacchus proud. Media events and the opportunities for culinary collaborations with the likes of Paley seem to sit well with him, too.

“This is a lot of fun for me right now,” Rynders said. “I feel like I’m making some of the best wines I’ve ever made in my career. I’m completely charged up, and I’d like to keep the ride going. You have to continue to find arrows to shove in your quiver to keep it full. We’ll see where it goes.”