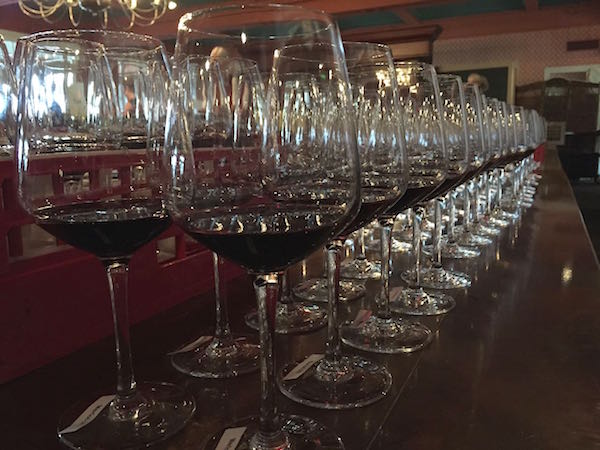 Wines await the judges at the 2015 Great Northwest Invitational Wine Competition. All wines are poured out of view of the judges, then served to them. The judges know what variety they’re tasting but neither the producer nor the price. (Photo by Andy Perdue/Great Northwest Wine)

HOOD RIVER, Ore. – A wine competition that is unique to the Pacific Northwest – and perhaps to the United States – took place last week at the historic Columbia Gorge Hotel.

The Great Northwest Invitational Wine Competition is one of two large judgings owned and operated by Great Northwest Wine. “The Invite,” as it has come to be known, spotlights wines which are nominated by the wine professionals who are then asked to evaluate them. 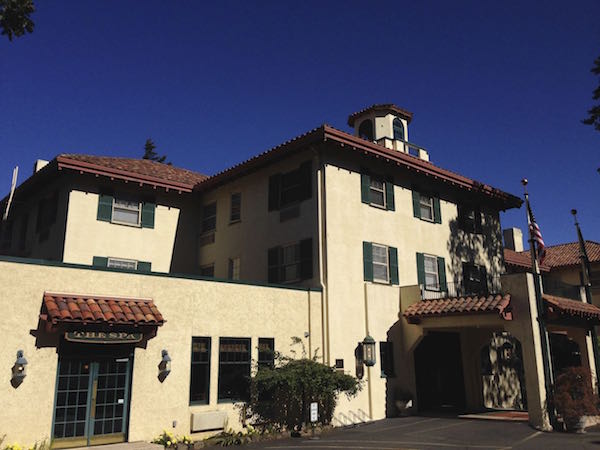 The Great Northwest Invitational Wine Competition is staged at the historic Columbia Gorge Hotel in Hood River, Ore. It is a beautiful venue in which to conduct a professional wine evaluation. (Photo by Andy Perdue/Great Northwest Wine)

The Invite came about as an idea from a wine competition held in Australia each year called the Six Nations Wine Challenge. In that competition, each of six nations is represented by a wine judge who selects and arranges for 100 representative wines to be entered.

In the case of the United States, longtime wine writer and judge Dan Berger of Santa Rosa, Calif., is the U.S. judge. He selects wines from throughout the United States, including the Pacific Northwest. In fact, wines from Maryhill Winery in Goldendale, Wash., and Reustle-Prayer Rock Vineyards in Roseburg, Ore., have won top awards from the Six Nations competition.

In our case, we ask each of our 20 judges to nominate 100 wines, then we compile a master list and send invitations to the nominated wineries. The wineries have the choice of vintage to enter so they may promote their most current — or future — releases. In rare cases, a winery might enter two vintages of the same wine.

In addition, we go through the nominations and will nominate 100 wines each that haven’t been put forward by the judges. This gives us the opportunity to put some wines in front of the judges that they might not have tasted before.

As a result of this process, all of the wines entered have been “pre-judged” in a sense because each nomination has been vetted by at least one wine professional. This tends to push the number of gold medals a few percentage points higher than one might see at most open competitions. 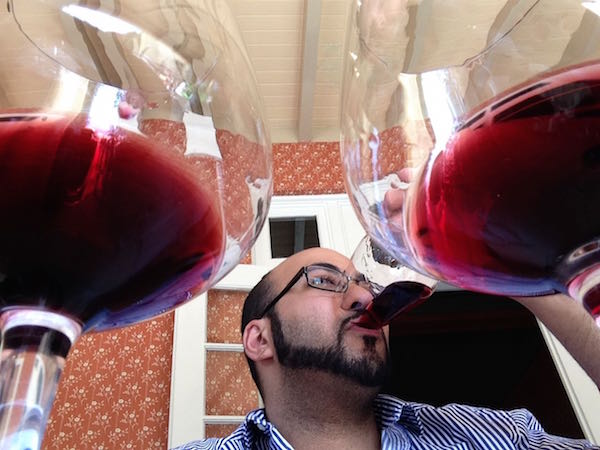 Yashar Shayan evaluates wine during the Great Northwest Invitational Wine Competition. Shayan, a certified sommelier, is owner of Impulse Wine, an online retailer in the Seattle area. During the judging, Shayan and other influential wine professionals will use the competition to consider wines they might later want to buy or sell. (Photo by Andy Perdue/Great Northwest Wine)

For the most part, the judges we include in the Invite are influential wine professionals. We define that as people who buy and sell a lot of wine – or assist in that. They include restaurant wine buyers, retailers, wholesalers, writers and consultants. They tend to buy by the pallet rather than by the case.

The purposes for focusing on such judges are twofold:

It is important for us to have a good mix of judges, so we carefully select them to make sure we have strong representation from our areas of coverage, including Washington, Oregon, British Columbia and Idaho.

We do have a solid core of judges, and we want to make sure to keep the mix fresh each year.

The judging lineup is significantly different than those who judge our spring Great Northwest Wine Competition, which draws more than twice as many entries because it is open to all wines and wineries. The spring judging generally doesn’t include as many restaurant professionals because it is difficult to get them to commit to too many competitions during the year. Instead, we have a few more winemakers as judges, who offer a different perspective.

How the judging works 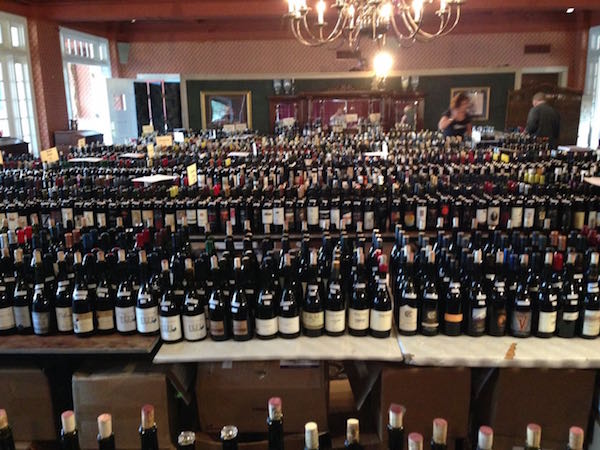 All wines at the Great Northwest Invitational Wine Competition are numbered and kept out of sight from the judges. The backroom staff deals with thousands of bottles. (Photo by Andy Perdue/Great Northwest Wine)

It is important that the judges know as little about the wines as possible, especially given the fact that they are nominating the wines. As such, the judges do not know if a winery actually entered.

Instead, when a wine is entered, it is given a random number within its category. For example, all wines labeled as Cabernet Sauvignon are randomly assigned sequential number. They are then served glasses of wines with numbers that correspond to the bottles. So a judge might receive six wines labeled “Cab-01,” “Cab-02,” etc. They know the wine is Cabernet Sauvignon, but they don’t know who made it or what the price is.

Tasting wines blind this way removes a couple of levels of natural bias, and it’s a method that most judges enjoy because it frees them of preconceived notions.

In the case of red wines, our backroom volunteers decant the wines. This is important because young red wines usually need a little oxygen to loosen up and show their best. Most larger competitions don’t take the time to do this, and we think it gives red wines their best opportunity to shine with our judges.

We do not decant white wines, as we think that could reduce some of the delicate aromatics in some varieties, particularly Riesling, Gewürztraminer, Viognier and Muscat.

The judges do not find out what wines they tasted until after the competition is completed. Then they are invited into the backroom to look through the wines. Many of the judges will spend an hour or more going through the bottles – retasting them, in some cases – and taking copious notes. Being in a room with 560 different wines – all open – is an opportunity they rarely get. A couple of days after the judging, they are sent a “decoder ring,” which gives them information on each wine judged, including price, alcohol and case production.

How the wines are scored 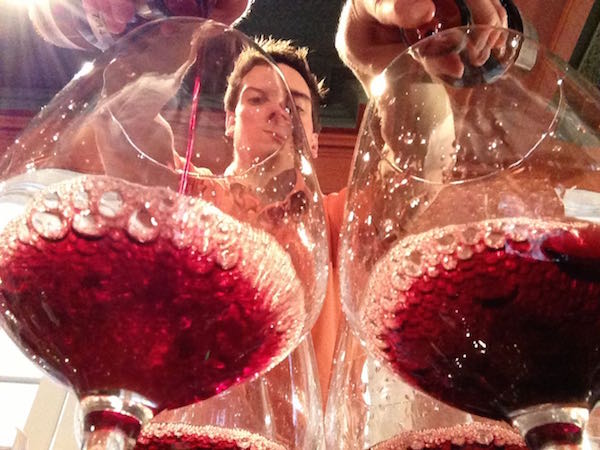 Wines are poured out of site of the judges, then served to them in a separate room, where they are evaluated under blind conditions. Red wines are decanted prior to being judged. (Photo by Andy Perdue/Great Northwest Wine)

We use a scoring system that is typical of wine competitions across North America.

Our judges work in groups of four. To start out, each judge quietly evaluates each wine by looking, swirling, sniffing, sipping and spitting. They take notes about what they do and do not like in the wine, then they award the wine one of four scores: gold, silver, bronze or no medal. Many judges will add a “plus” or “minus” sign to some of their scores to remind them if they’re sitting on the fence.

Once each judge has completed their initial evaluation, they talk about each wine and come up with an initial score. To earn a medal, a majority of the judges must agree. For example, for a wine to earn a gold medal, three of the four judges must agree it’s gold. During the discussion phase, judges are welcome to listen to others and change their scores if they are convinced to move up or down.

If all four judges award a gold medal, then the wine is deemed a unanimous double gold. We ask judges to be cautious in awarding double golds to only the finest wines they taste, as we don’t want to abuse or dilute the meaning of such an honor.

All red wines deemed best of class then will be tasted together to determine the best red wine. This is repeated for other categories, including best white, best sparkling, best rosé and best dessert.

At the end of the competition, all 20 judges will taste the five top wines and vote on the best of show. This is difficult because the five wines are all different in style. The judges are instructed to look at balance, style and varietal correctness. We vote by acclimation, meaning the judges may vote for as many of the wines as they like. The wine with the most votes wins best of show.

During the two days of the Great Northwest Wine Competition, each judge will have evaluated about 120 wines. While this sounds like a lot, it’s about half the number a judge will see at most competitions. It is not unusual for judges at large competitions to taste 100 or more wines per day.

Judging wine is a fun, exciting, rewarding and often grueling process. In the case of the Great Northwest Invitational Wine Competition, it takes 20 judges, a dozen people working in the backroom, thousands of glasses being washed by the hotel staff, more than 200 meals being served and months of organizing leading up to the event.

We hope this provides a little insight into how we operate our competitions.