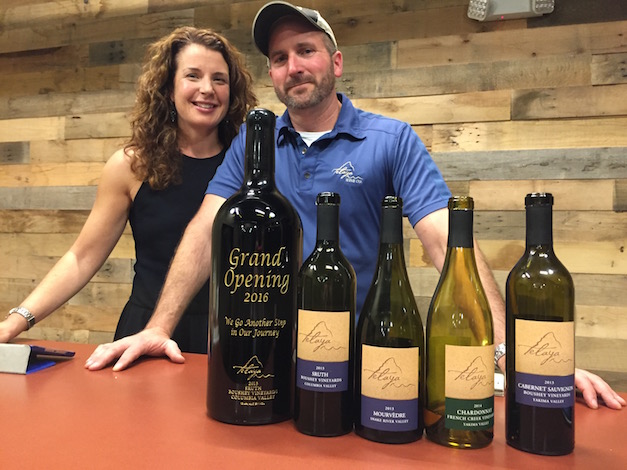 GARDEN CITY, Idaho – Earl and Carrie Sullivan opened the doors Tuesday to their dream to come true for Telaya Wine Co., a remarkable 12,000-square-foot winemaking facility and tasting room along the banks of the Boise River.

“This has been a vision for us probably from the start,” Earl said. “It wasn’t just a winery to make wine, but also working with each other and having the kids here. It was really important, and the building process has brought all that back together. It’s nice.”

During their lunch break from some final touches before the VIP opening, Carrie, a veterinary surgeon with a hands-on role in the winemaking, got in both a friendly punch on the shoulder – and moments later a warm hug.

“The punch could have been a lot harder,” she said with a smile. “It’s the way we have our relationship. We’ve been through a lot harder things than building this building, but it has brought us together.”

Moya Dolsby, executive director for the Idaho Wine Commission, told Great Northwest Wine, “I am very proud of Earl and Carrie. Their passion and drive is infectious. It has allowed them to build a beautiful winery, have hundreds of wine club members and sell out of their wine. Idaho is very lucky to have them.” 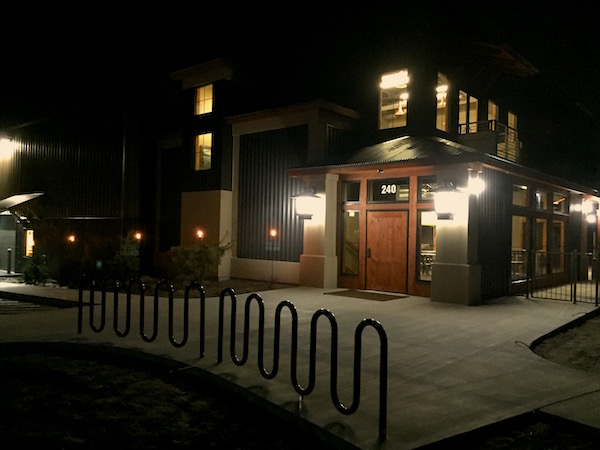 The only thing between Telaya Wine Co.’s tasting room and the Boise River is a bike and walking path known as the Greenbelt. (Photo by Eric Degerman/Great Northwest Wine)

As the weather warms and landscaping takes hold, the Sullivans’ new facility, a blend of Montana hunting lodge with industrial chic, will blossom into one of the Pacific Northwest’s top winery destinations for several reasons, starting with its setting and proximity to the revitalized 330-room Riverside Hotel.

“We have the scenic views, but we have designed this building around the process,” Earl said. “We want the approachability and accessibility of the wine, and we want people to feel like they are at home, very relaxed.”

The Sullivans declined to disclose the cost of the new building for Telaya (pronounced tuh-LIE-uh). Earl wryly described it as “approachably affordable,” and they indeed appear to poised to sell well beyond their current 3,500-case production and 700 wine club members. Even though they’ve moved only 12 blocks closer to the state Capitol, Telaya has come a long way since its launch as a tenant of Cinder Wines’ 44th Street Wineries.

“The process started a year and a half ago when Melanie Krause came to us and said, ‘We’re getting too big, and you are getting too big. This isn’t going to continue to work past your current lease,’ ” Earl said. “Fortunately, we were able to get through this past harvest without having to move. We only broke ground on this building in July. Seven months later, we’re essentially finished.” 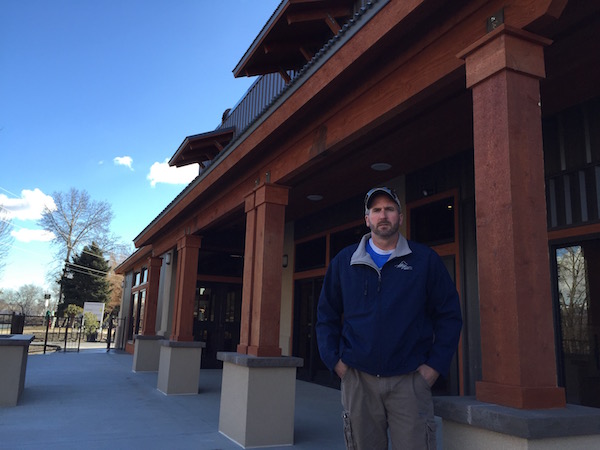 Earl Sullivan, winemaker/owner of Telaya Wine Co., moves into his new vinification facility, tasting room and events center in Garden City, Idaho. He and his wife, Carrie, own the facility along the Boise River, and they share space with Leslie Preston of Coiled Wines. (Photo by Eric Degerman/Great Northwest Wine)

Eight years ago, Telaya began with 50 cases from the 2008 vintage and a word the Sullivans created to reference two places with special meanings — the Tetons and playa – Spanish for “beach.” The Sullivans now own a 5,000-case vinification facility with working space for Leslie Preston’s award-winning Coiled Wines and Telaya assistant winemaker Hailey Minder’s budding 3100 Cellars sparkling wine project.

Most important, however, are the wines, and the Sullivans are coming off their most successful year, one that began with Telaya named as Wine Press Northwest magazine’s Idaho Winery to Watch for 2015.

Telaya’s 2012 Syrah received a double gold and 2012 Viognier a gold medal both at the Seattle Wine Awards. The 2013 Turas – a Syrah-based blend from the Snake River Valley, merited a gold at the Idaho Wine Competition.

Their most decorated bottling, however, was the Telaya 2012 Cabernet Sauvignon. It took the Chairman’s Award at the Riverside (Calif.) International Wine Competition, a gold medal at the Seattle Wine Awards and a coveted double platinum in Wine Press Northwest’s year-end Platinum “Best of the Best” judging. That Cab comes from Scooteney Flats Vineyard on Red Mountain in Washington state.

“We’ve always had the vision of making the best possible wine that we can make,” he said. “It starts with the best fruit, and we just don’t have enough fruit in Idaho for all of us to make great wine. Other winemakers were here first. They have contracts, and they have taken up a big chunk of the fruit. As things come up in Idaho, we try to get involved and make it happen.” 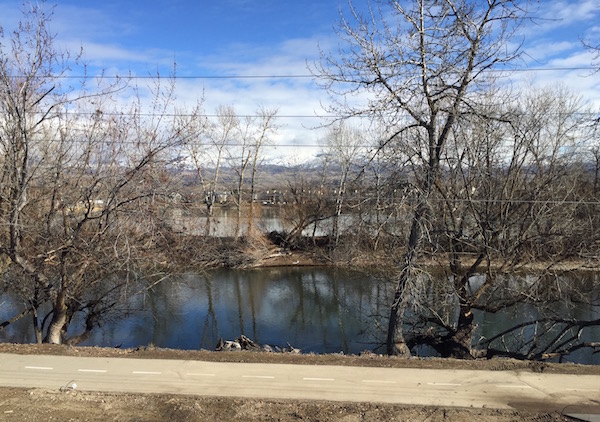 There are 51 wineries in the Gem State, and the scarcity of fruit in Idaho prompted the Sullivans to develop relationships with some of Washington’s top growers, including renowned Dick Boushey and Damon LaLonde. They handle those larger bottlings in the Columbia Valley facility owned by acclaimed Charlie Hoppes.

“We’ll continue to operate with a foot in both places,” Earl said. “I don’t particularly mind the drive between here and the Tri-Cities. I’ve gotten it down to about four hours, and Charlie’s been good to work with. He’s got a large shop.”

But now, the Sullivans will be bringing back the smaller lots such as Grenache, Mourvèdre and Counoise to Garden City. One of those varieties will end up in Carrie’s hands as part of Telaya’s first rosé program.

“We will still have grower relationships in Washington,” Earl said. 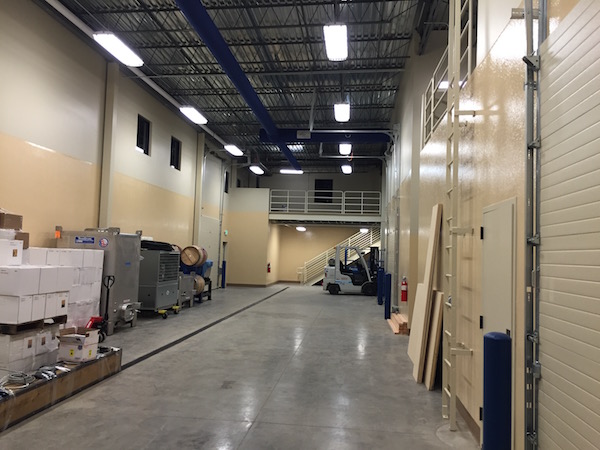 Earl worked on the family farm growing up in Kentucky, then met Carrie at Centre College in Danville on his way to a career in the pharmaceutical industry. Fifteen years ago, they moved to Boise and put down roots because they wanted to raise their two boys in Idaho. Along the way, the Sullivans have refined their touch for staging events and building bonds with customers. Thanks to Jordan-Wilcomb Construction, they now can play host to as many functions as they can handle.

“We enjoy the hospitality side of it,” he said. “It is creating an experience with the wine. Danny Meyer in Setting the Table says, ‘The delivery of the product to you is a service. How you feel about the service? That’s hospitality.’ Everyone at Telaya has to read that book, and we talk about that at all of our corporate retreats.”

On the second floor is a conference room available for business meetings, wine education, birthday parties and wedding receptions. The ground floor features a tasting room that can be partitioned off by barn doors – creating separate tasting experiences for Telaya and Coiled.

“And we have the patio with a fire pit,” Carrie added.

Thoughtful touches around the tasting room include phone-charging stations at opposite ends of the fire pit.

“If we can get people walking or riding down the Greenbelt to take notice, hopefully they’ll say, ‘OK, I’m going to give Idaho wine a shot,’ ” Earl said. “We need to educate people on Idaho wine, on Telaya wine and on hospitality. It can be done well.”

Starting Thursday, the shared tasting room will be open seven days a week.

Telaya, Riverside ready to do business 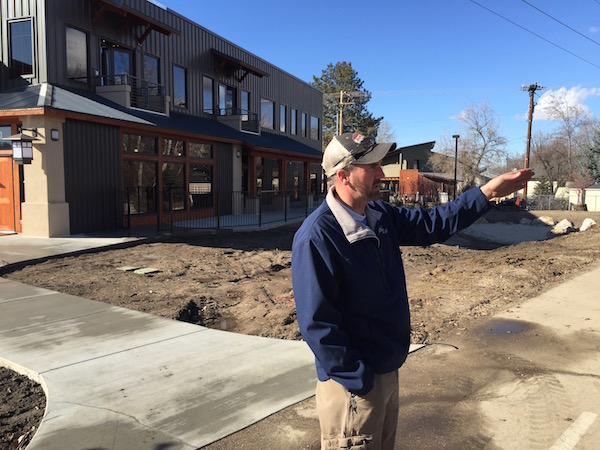 Earl Sullivan, winemaker/owner of Telaya Wine Co., established his wine production facility in the Boise suburb of Garden City next door to The Riverside Hotel and along the Boise River Greenbelt bike/walking path. (Photo by Eric Degerman/Great Northwest Wine)

Telaya’s arrival also would seem to be an attraction for the Riverside Hotel, which sold a portion of its land to the Sullivans for Telaya. A stone’s throw from the tasting room is the Riverside’s Sandbar Patio Bar & Grill.

“This hotel used to be the destination in Boise,” Earl said. “The new ownership group wants to restore it to its former glory, and they’ve renovated every room in the hotel. The Sapphire Room now has live music 360 days a year.

“It’s a tremendous asset for us, and we’ve booked several events for the winery through the hotel,” Sullivan continued. “It’s a great avenue for people to become aware of Idaho wine as they travel. They can walk right next door to a winery.”

Today, Earl’s parents jet into Boise to see the Telaya project. Both of their grandsons, Jack and Ty, now get to spend more time helping out around the family winery, but they also know there is a quiet space in their father’s second-story office with a view of the Boise River, the Greenbelt and snow-capped mountains.

“Their bean bag chairs are right there in the corner,” Earl said.