Rise and fall of Washington Lemberger 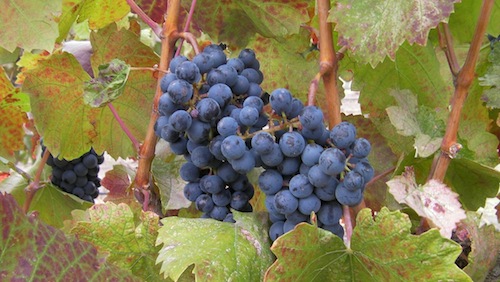 Lemberger, a red variety grown in Washington, has never caught on as a major variety and is slowly slipping into obscurity. These clusters were at Zephyr Ridge in the Horse Heaven Hills, a block that has since been pulled out and replaced with Malbec. (Photo by Andy Perdue/Great Northwest Wine)

PROSSER, Wash. – With a name that sounded too much like a stinky German cheese, Lemberger never really had a chance when it was introduced to Washington in the 1960s and ’70s.

And that’s too bad, says winemaker Wade Wolfe, owner of Thurston Wolfe Winery in Prosser, because it’s a red wine grape that is perfectly suited to grow in Washington’s vast Columbia Valley and it makes a beautiful wine.

A quarter-century ago, as much as 250 acres of Lemberger were planted in Washington – this at a time when fewer than 10,000 total acres of wine grapes grew in the state. Today, Wolfe figures fewer than 50 acres are left amid the 55,000 acres now growing in Washington.

It’s an anachronism, a throwback to the Wild West days of the early modern Washington wine industry, before Cabernet Sauvignon was king here.

We recently caught up with Wolfe – a fan of Lemberger since he arrived in Washington in 1978 – to talk about the grape, what went wrong and perhaps how it could make a little comeback.

Walter Clore, known as “the father of Washington wine,” was a viticulture researcher who convinced farmers to grow wine grapes. Clore, who died in 2003, was a big advocate of Lemberger and thought the grape could thrive in Washington. (Photo courtesy of Washington State University)

Walter Clore, known as the father of Washington’s wine industry, was a big fan of Lemberger. In the 1940s, he brought in the grape from a nursery in British Columbia during his famous “Wine Project,” in which he was seeing what would work well in the Columbia Valley’s hot summers and frigid winters.

Wolfe came to Washington as a viticulturist working for Chateau Ste. Michelle. When he arrived in 1978, Clore already had retired from Washington State University and was consulting for Ste. Michelle. Clore took Wolfe under his wing and introduced him to grape growers and the different varieties being grown in the region.

“I’m not sure how he decided on Lemberger, which back then – and even now – is a pretty obscure variety,” Wolfe told Great Northwest Wine. “He did find that it did very well here in Washington in terms of surviving cold and also consistent yields and quality in terms of being able to ripen.”

In Europe, it is well known in Austria by the name Blaufränkisch. At one time, it was the second-most-planted red wine grape after Pinot Noir. Wolfe firmly believes that if Clore had used the Austrian name instead of Lemberger, it would have done much better.

“I would say it was unfortunate that it was introduced under the name Lemberger rather than Blaufränkisch,” Wolfe said. “It would have been a far more successful variety – at least in terms of marketing – if they’d done that.”

Clore, raised in a teetotaling Oklahoma household, discovered that in addition to being able to withstand the Columbia Valley’s regular cold winters, it also resulted in a fruity, approachable red wine.

“Besides being productive and well suited to this area, it produces a very soft, fruity red wine,” Wolfe said. “I very rapidly came to appreciate it the same way Walt did. I think that’s what Walt really liked about it. He wasn’t a red wine drinker, but he loved Lemberger because of those characteristics.” 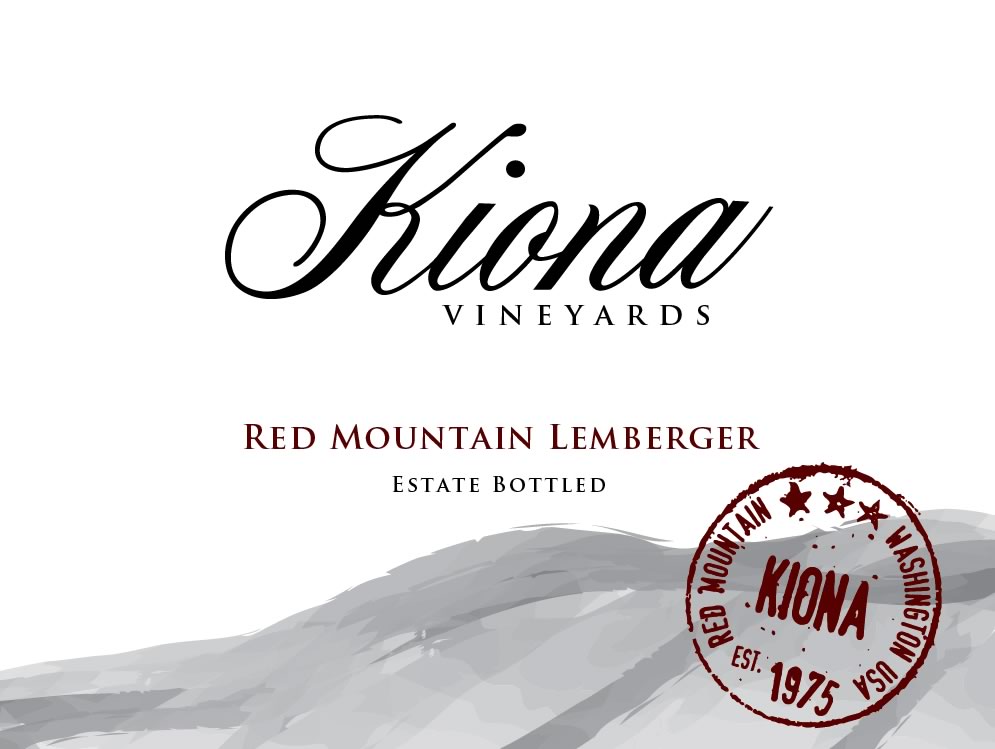 The first commercial planting was in 1976 on Red Mountain by John Williams of Kiona Vineyards & Winery. From there, the next 15 years saw solid growth, much to Clore’s delight.

After Wolfe left Ste. Michelle, he started Thurston Wolfe in 1987, and Lemberger was one of the first varietal red wines he made. In fact, he made two versions: a reserve Lemberger aged in oak and a fresh, fruity example that was unoaked. Wolfe said Lemberger grown in warmer areas such as the Horse Heaven Hills handled the oak quite well, while cooler-climate Lemberger from the Yakima Valley works well in a Beaujolais style or as a rosé.

And he continues to make it every year. Some vintages, all of it gets blended into the Dr. Wolfe Family Red, but sometimes it gets top billing in its own bottle and also goes into Wolfe’s rosé.

When Wolfe arrived at Hogue Cellars, the Yakima Valley winery already was making a Lemberger. In the late 1990s using grapes from Red Willow Vineyard, it produced a reserve-tier version under the name Blue Franc. Around the same time, California winemaker Jed Steele – who played college basketball at Gonzaga – was making a Washington Lemberger under that name – and still does today. Wolfe described the Hogue version as a dark, concentrated, heavier red.

Through the years, other wineries have made it, including the now-defunct Oakwood Cellars near Red Mountain. Powers Winery in Kennewick made a fortified dessert wine from Lemberger using grapes from Champoux Vineyards in the Horse Heaven Hills. A handful of Washington wineries – led by Kiona – continue to make some.

As recently as 2008, Wolfe got his Lemberger grapes from renowned Zephyr Ridge Vineyard in the Horse Heaven Hills, but it has since been pulled out in favor of Malbec. Today, Wolfe buys his Lemberger from Crawford Vineyard north of Prosser.

Earlier this spring, Destiny Ridge Vineyard in the Horse Heaven Hills pulled out its 9 acres of Lemberger in favor of Cabernet Sauvignon. Owner Jarrod Boyle likes the grape and the resulting wine, but it just doesn’t pay the bills, so he reluctantly removed it.

“Unfortunately, when Syrah became very popular in the late ’90s and early 2000s, it became the variety of choice for blending with the Bordeaux varieties because it was darker,” Wolfe said. “That was the start of the demise of most of the Lemberger in the state.” 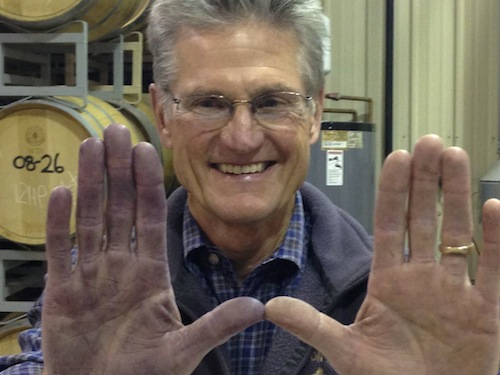 Wade Wolfe, owner and winemaker of Thurston Wolfe Winery in Prosser, Wash., believes Lemberger could make a bit of a comeback, thanks to the introduction of virus-free vines. He also encourages winemakers to use the grape’s Austrian name: Blaufränkisch. (Photo by Andy Perdue/Great Northwest Wine)

Wolfe figures there are fewer than 50 acres left of Lemberger, a sad state for the grape that Clore thought could be Washington’s answer to Zinfandel – another once-obscure variety that’s been a darling in California for a century.

However, Wolfe said all of the original Lemberger planted in Washington was infected with a virus, a situation that affected its ability to ripen. Because those first vines from British Columbia were ultimately propagated across the state, nearly everything that’s left has that virus in it.

But virus-free Lemberger now is planted at WSU’s foundation block north of Prosser, and that leaves Wolfe wondering.

“It would be really interesting to have it planted out now and compare it to the old selections of Lemberger that have the virus in it to see how it changes the character of the wine,” Wolfe said. “That could be an opportunity for a new renaissance for it.”

With plenty of new acreage going in on Red Mountain, the Horse Heaven Hills and the Wahluke Slope, surely a few rows of Lemberger here and there could be accommodated.

Wolfe also said that abandoning the name Lemberger should be a priority.

“I’ve debated changing it over to Blaufränkisch, just because I think it would get better consumer recognition outside of the state,” Wolfe said. “There’s obviously a lot of people here in Washington who know and appreciate the variety. In fact, when we don’t make it, we get a lot of requests for it. It’ll be back in our product mix here in the near future.”

Because of the brief popularity of Washington Lemberger and its ability to withstand winter cold, other regions have planted the grape, including British Columbia, Ontario, New York and Colorado. A bit also is planted in Idaho, where Crossings Winery has given it the clever name of Bleu Noir.

“I think we need to consider going back to the Austrian name,” Wolfe said. “There might be more marketing opportunity, especially when you get to the East Coast.”