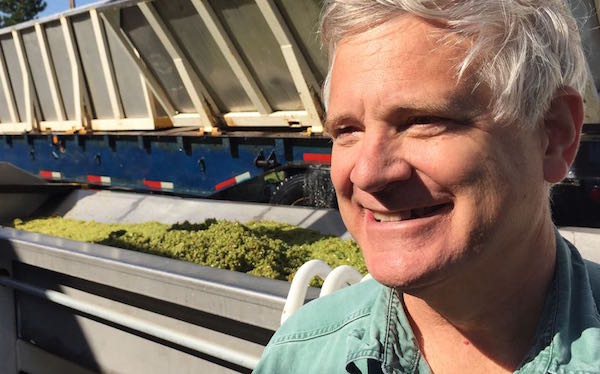 Rob Griffin came to Washington in 1977, and he started his 40th harvest today when 28 tons of old vine Sauvignon Blanc arrived at his Richland winery. (Photo by Andy Perdue/Great Northwest Wine)

RICHLAND, Wash. – As 28 tons of old-vine Sauvignon Blanc arrived at the crush pad at Barnard Griffin, owner/winemaker Rob Griffin kicked off his 40th harvest in Washington.

Griffin, the longest-tenured winemaker in Washington, was less nostalgic about the moment and more concerned that all of his equipment was in working order. Then he took a moment to kiss his newborn granddaughter and got to work.

The grapes came from Sauvignon Blanc vines planted in 1974 at Bacchus Vineyard, a site overlooking the Columbia River north of Pasco that Griffin has worked with pretty much since the beginning.

“The first time I actually dealt with the fruit from these particular vines was in 1978,” he said.

Griffin grew up in California. His uncle owned an orchard in Napa Valley and in the ’60s was convinced to convert it to grapes. Griffin went on to earn degrees at vaunted University of California-Davis. After a little time at historic Buena Vista Winery in Sonoma, he was recruited north by Bill Preston. 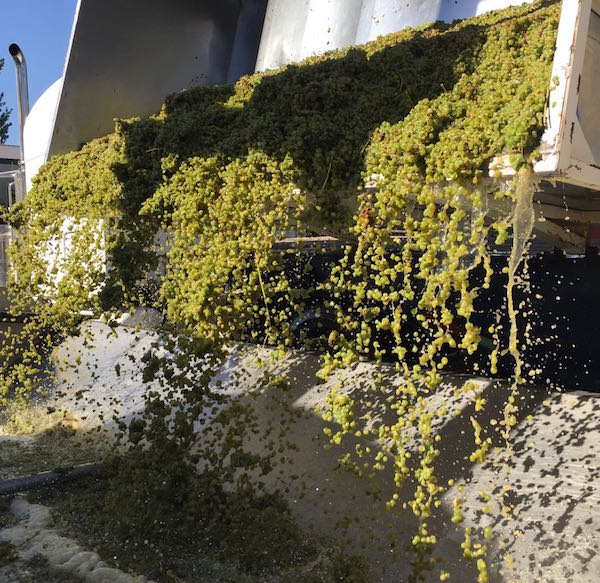 Sauvignon Blanc from Bacchus Vineyard arrives at Barnard Griffin Winery in Richland, Wash. The grapes were planted in 1974, making them some of the oldest in the state. (Photo by Andy Perdue/Great Northwest Wine)

When he arrived, Washington was small and considered at best an outpost in the American wine industry.

“When I got here, the conventional wisdom among the roughly 10 wineries that existed in this state was that white wines were what the region would always excel at, and reds were kind of a sideshow,” he said. “That’s changed dramatically. In the early days, it was missionary work and no one believed that you could grow grapes or make wine here, particularly good wine. Much has changed there.”

By 1980, Griffin and his wife, Deborah Barnard, were beginning to think about their own winery.

“I was talking about it in college,” he said with a chuckle. “That’s what every winemaker wants to do: be in a position to control as much as they can in their product.”

Barnard Griffin started in 1983, while Griffin was still head winemaker for Preston. Soon after, he departed for Hogue Cellars, a new winery in the Yakima Valley town of Prosser.

“Hogue had a progressive attitude for being in the wine business, so that was a good move for me,” Griffin said.

By 1991, Barnard Griffin required too much of his attention to continue to oversee Hogue, so he left to focus on his eponymous winery.

Today, Barnard Griffin’s winery complex is in south Richland, with Bookwalter Winery on one side and Tagaris Winery on the other. In recent years, the winery has expanded its tasting room and added a restaurant, glass art studio and conference space.

And now his children are deeply involved.

Next generation for Barnard Griffin 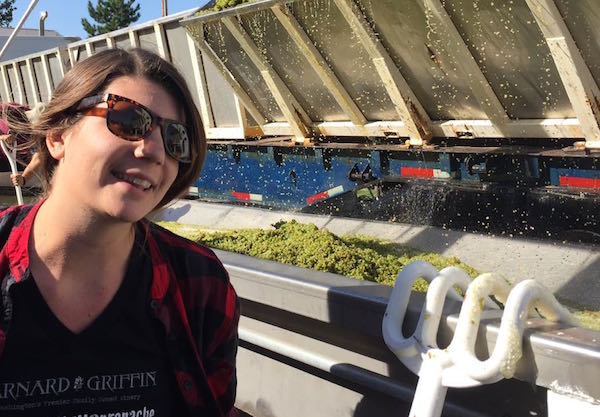 Megan Hughes is the daughter of Deborah Barnard and Rob Griffin. She and her sister, Elise Jackson, have joined their parents at Barnard Griffin Winery in Richland, Wash. (Photo by Andy Perdue/Great Northwest Wine)

Barnard and Griffin’s two daughters, Elise Jackson and Megan Hughes, came back to the family business after graduating from Washington State University. It’s a great fit because Jackson focuses on business and marketing, and Hughes is an assistant winemaker, handling lab work and learning from her father.

“That’s great,” Griffin said proudly. “The idea of building a family business that can pass through generations is a cool idea. We have something that’s large enough and sustaining enough to be interesting, too. A lot of family wineries are small. I can understand why a second generation might not be excited about that.”

Jackson gave birth to the first grandchild in the Barnard Griffin clan, and the 7-week-old girl was on hand this morning to witness her first harvest.

This fall, Barnard Griffin will crush 900 tons of wine grapes, enough for about 55,000 cases of wine. That’s up a little from previous years.

“It’s a big number for us,” Griffin said. “We’ve gone up a little bit. Much of what we do is dependent on what the vine yield is. We do own enough of our own vineyards that we’re subject to the vagaries. If there’s more fruit, we have more fruit.”

Griffin expects to start bringing in Pinot Gris from his estate Caroway Vineyard east of Kennewick as early as Tuesday, and he might even harvest Syrah next week from a favorite vineyard on the Wahluke Slope near the community of Desert Aire.

It’s another early harvest in Washington wine country – the fourth in a row. But it’s nothing Griffin hasn’t seen in the past 40 years.